The team principal discusses workplace culture, technology and challenges with regulations and logistics 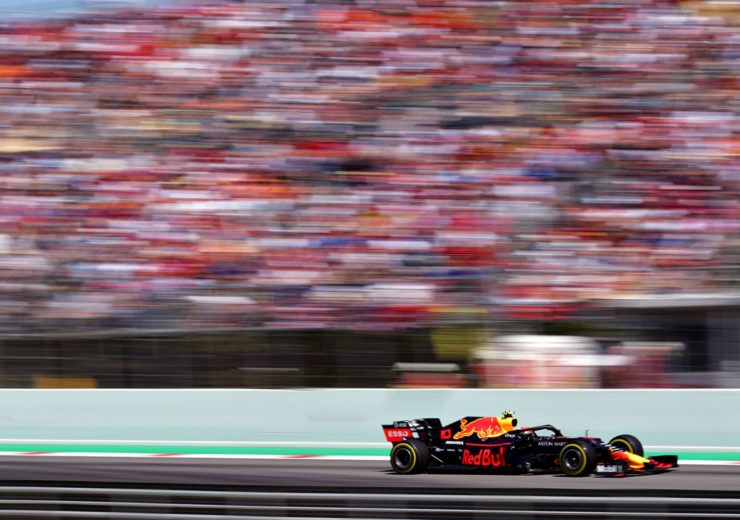 Daniel Ricciardo will probably never forget the moment he performed his signature celebration by chugging champagne from a shoe after winning the Monaco Grand Prix in 2018 – but for Christian Horner, it was a crowning moment for all 800 people in his Red Bull Racing Formula One team.

The team principal is keen to point out the team ethic that goes elite motor racing is arguably more important than any other sport.

Whether it’s the designers and engineers who build the best new car or the data analysts and pit crew who then fine-tune it to squeeze every last millisecond out of performance, everyone in an F1 team plays a key role in races such as the victory on the sport’s most famous track last year.

Christian Horner on teamwork in F1

“It’s not a nine ‘til five job,” says Horner, 45, speaking at the Microsoft Future Decoded conference in London last week. “We work in a sport that has fierce competition and is arguably the biggest team sport in the world, where our 800 employees go head-to-head with other big teams.

“Each area of the business is challenged every year to create a better working environment that inspires engineers.

“It’s hugely important to work together as one unit, with one goal to be winning races and competing for championships.

“Inevitably, there’s days when you get more things wrong than right, but as a team it’s most important to collaborate and remember those missions because that’s what feeds the next goal.

“That feeling of teamwork and elation really motivates the business, whether it’s trackside or the employees when the cars they built wins a Grand Prix.

“That culture is what our team exists on.”

With 500 million viewers across the world, Formula 1 is the most watched sporting event outside the FIFA World Cup and Olympics.

Red Bull F1 has been in existence since the energy drink brand bought the Jaguar F1 team in November 2014 and began racing in the 2005 season.

Horner, a former racing driver who retired aged 25, was appointed as team principal for the beginning of that campaign – the youngest person to take up the role at 32.

The team’s most successful period was between 2010 and 2013, when it won four successive constructor titles and Sebastian Vettel achieved the same feat for drivers’ championships.

But times have been tougher since, having been overtaken by Mercedes and Ferrari on the grid.

“Our culture is to invest in youth and talent,” says Horner, who reportedly earns a $10m annual salary. “It’s about giving young drivers the room to thrive at the highest level.

“The culture we create is important because we’re against some formidable opponents.”

Red Bull F1 has a young driver line-up in the 2019 season, with lead driver Max Verstappen only 22 and his teammate Alexander Albon aged 23, having replaced Pierre Gasly in August.

While the drivers are the racing team’s biggest assets, Horner admits they’re also the most troublesome.

“They’re called teammates but that couldn’t be further from the truth,” he says.

“Max is our lead driver and is therefore the benchmark for Alex, and that talent is pretty tough for anyone to go up against.

“The one driver who has the same chance and same equipment is the teammate, and that’s what makes the F1 drivers’ championship and the dynamic between the drivers so fascinating.

“And indeed, we’ve had some interesting battles over the years with some of our previous drivers.

“They are effectively contractors to the team so we have this perverse situation where the constructors’ championship, which is where the teams finish, is something that matters most to the teams and is where the money is distributed to them.

“But of course the prestige sits with the drivers’ championship – and that’s what the drivers are fundamentally interested in.”

Between March and December this year, there will be 21 Grand Prix and after each race, the entire on-site team will huddle together for a debriefing.

“We’ll talk about the good and bad things that have happened, and answering questions about upcoming races,” explains Horner.

“There’s always rumours that permeate around our sport so it’s an opportunity for me to communicate directly with our staff about our objectives in the short, medium and long term.”

Back in the office, based in Milton Keynes, there is an open-plan layout to encourage collaboration between colleagues who span 22 departments.

“Rather than an email culture, there’s an environment of open communication,” says Horner.

“Designers from the different car sectors, for example, sit together to have that open dialogue.”

Communication extends beyond the Red Bull Racing team to the lengthy list of partners and suppliers, which range from Aston Martin and Siemens to IBM and AT&T.

The F1 boss adds: “They’re all contributing to our performance and are inside the car, as well as on the car.

“It’s a showcase arena for these blue-chip companies to display cutting-edge technologies and we’ll often engage with CTOs around the world to explore future technologies because we’re always looking for that edge.”

With 21 races throughout the 52 weeks of the year – each in a different part of the world – it causes a logistics headache for F1 teams that is often overlooked.

“We have five races remaining this year. I asked my assistant how many flights I have left – and I have 21 between now and the end of November,” says Horner.

“We’ll do more than 100 flights in a year and by the time I get to the fifth race, I’ll have gone around the world at least twice.”

For each Grand Prix, Red Bull Racing will take a travelling team of about 100 people, while 66 tonnes of cargo is carried.

The team owns five sets of all components that will be stocked in its garage during a race, and these are delivered to the circuit by sea freight up to six weeks in advance. Cars and spare parts, meanwhile, are flown in.

Horner says: “Technology plays a key role because we need to know where these cars and parts are at any one time.

“Such is the speed of development that we don’t mass produce any of these parts and we’ll only have two or three at any one time. So it’s crucial we know where they are.”

Christian Horner on F1 regulations and evolution of a car

Each year, the Fédération Internationale de l’Automobile (FIA) motor sport body will review regulations and often produce a new set of guidelines, standards and rules that affect how cars are built.

Teams then have just nine months to design and build a car to satisfy these technical directives while maximising performance.

Horner says: “For this year, it changed the front wing to enable more overtaking. The small change introduced to the front wing affected every other component on the car because it’s the part that meets the rest of the vehicle.

“Sometimes an unintended consequence of these regulation changes has a massive impact on us and, as a team, we have to be able to interpret these rules that are often poorly written and vague to create as much downforce while at the same time adhere to strict rules.”

But Horner admits that an F1 vehicle will be in continuous development throughout the year as it is fine-tuned.

He adds: “The car is effectively a prototype and we’ll create five cars during the course of a year.

“There’s 7,500 unique parts in a car and each one will be revisited three or four times. We’ll expect to add two seconds of lap time performance between the first and last race.

“Each circuit is different so the car also has to be tuned to the different configurations of a circuit.”

Christian Horner on data in F1

As one of the most innovative sports on the planet, technology is at the heart of everything F1 teams do and regular benchmarking is carried out to ensure they are coming up with the best solutions.

When manufacturers create a concept design for a vehicle, the drivers will test it out in a “virtual wind tunnel”, a simulator that provides data sets used for making decisions on how to proceed.

Horner says: “All the testing and decisions are done in the virtual world. The amount of data we’re creating now is quite phenomenal.”

On race day, about 400GB of data could be generated at any one time from cars packed with more than 100 sensors and this can be viewed half a second later in the team’s UK-based operations room, no matter where in the world the Grand Prix is held.

Horner compares it to a military operation, adding: “Our team could be looking at race analysis during a Grand Prix or running gaming theories to find the quickest way to the end of the race.

“It’s a mission control room that links the factory to what’s going on trackside.

“He can drive the car at an optimum speed but also explain to the engineering team where the issue is and highlight it through the use of data.”