AR and VR in sport: From keeping fans entertained to improving training

From the integration of virtual reality in training sessions to get an edge over the competition to improving the experience for fans, AR and VR are increasingly being used in sports 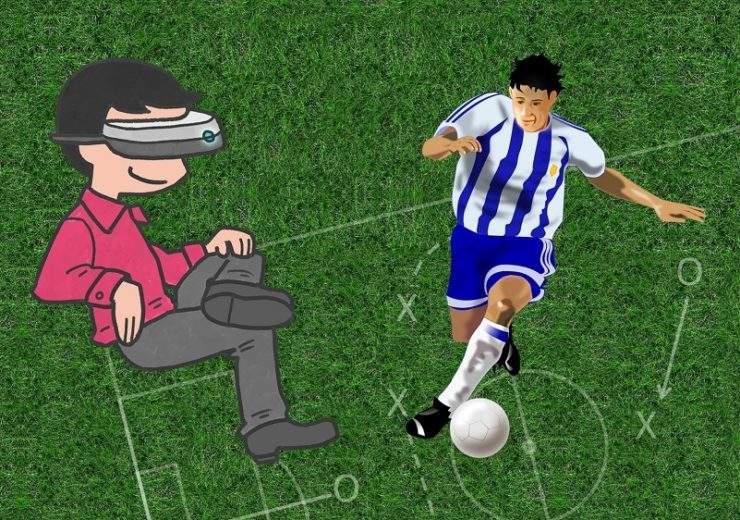 Finding a crucial edge over competition is crucial in any sport – and many are increasingly turning to new technology like augmented reality (AR) and virtual reality (VR) to help them.

At the same time, fans are also experiencing the advantages of the tech as they are brought closer to the on-field action.

Here are the many ways AR and VR are being used in sports.

VR company Beyond Sports has carved out a niche in this sector.

It has worked with football teams, such as Arsenal, to create immersive training regimes.

Beyond Sports business director Sander Schouten claims it can improve tactical knowledge of youth players by allowing them to experience match scenarios through VR.

Similar technology has been trialled in the NFL for players recovering from injury.

Because of the physical nature of the sport, it makes it difficult to put players back on to the training pitch before they have fully recovered.

However, VR can circumvent this issue by allowing players to practise plays at a slower pace as they build up their recovery.

Speaking to NBC Sports, Arkansas Razorbacks head coach Bret Bielema said: “You can sit in a chair and take 20 [repetitions] of practice and walk through plays as if you were on a practice field.

“It [VR] literally changes the dynamic of trying to teach someone on a learning curve in a short amount of time – it allows you to process and learn the game without actually playing.”

The effectiveness of the repetitions in a simulated professional environment helps to improve memory and boost confidence, according to UK Sport director of performance Simon Timson.

The tech has been used in sports as diverse as skiing, athletics, baseball and Formula 1.

AR and VR for sport fans

The use of virtual reality was trialled by the BBC during last summer’s FIFA World Cup – allowing viewers to get a 360-degree view of the game.

Liverpool Football Club are one of the top English Premier League teams that are also looking at the potential for VR to give its global fanbase a similar experience to those in the stadium.

With a 54,000-seater stadium and up to 150,000 people applying for match tickets, inevitably many fans are left disappointed.

Liverpool CEO Peter Moore revealed to Compelo last November that he was contemplating the idea to use VR technology to allow fans to experience watching the game live.

He said: “Through virtual reality, I can put on a headset and be in my seat listening to the Kop singing You’ll Never Walk Alone.

“I think that’s eventually where we go. Through VR, we can bring Anfield to the fans rather than them coming to Anfield.”

Other sports teams are exploring the use of AR to help build connections with the fans and inspire club loyalty.

AR company Blippar pioneered the use of the tech in sports during the England Rugby World Cup in 2015.

The Blippar app allowed ticketholders to scan their ticket to give them access to content such as match previews, stadium information or even the view from their seat in the stands.

Despite receiving more than $130m (£103m) in investment since it was founded in 2011, Blippar recently went into administration.

Yorkshire football club Frickley Athletic, who ply their trade in the eighth tier of English football, were one of the first to incorporate augmented reality in their match day programme.

Since 2017, fans have been able to scan pages of the programme to watch highlights of previous games.

Major League Baseball’s Ballparks app overlays live statistics on the players at base when fans hold their smartphone or tablet to up to the on-field action.

Currently, the most common use of AR in sport is by referees and sports officials.

Many tennis fans will be familiar with the Hawk-Eye system that tracks the trajectory of the tennis ball and overlays it on the court.

The technology was first used in cricket in 2001 and is now integrated into the officiating of more than 20 sports including baseball, Nascar motor racing, tennis and ice hockey.

Enforcement of the offside rule is often a contentious issue that football referees have to contend with but AR offers a solution here too by allowing an imaginary line to be superimposed over the field of play to check whether anyone is in an offside position.

Another area where AR is becoming increasingly prevalent is in sports broadcasting.

Highlights shows such as Match of the Day overlay player statistics and charts in the studio.

This gives viewers additional information while the presenters continue to comment on the match.

Similar uses are seen in tennis, where footage of the French Open was supplemented with additional statistics such as ball speed.