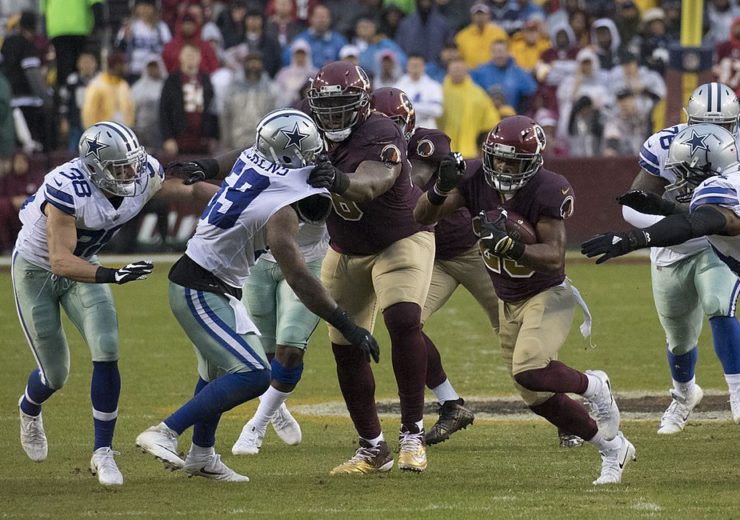 A total of $1.1bn is spent by brands on NFL sponsorship deals (Credit: Chris Thompson/Wikimedia Commons)

Appearing on the pitch-side advertising banners and jumbotrons at National Football League (NFL) games can be a costly endeavour – but for the sponsors that have invested in the 2019-20 season, it’s an opportunity to have their brands exposed to more than 15 million people every match.

Some 32 multi-million dollar deals have been made between US brands and the NFL ahead of the upcoming season, which kicks off on Friday 6 September as the Chicago Bears face-off against the Green Bay Packers.

Unsurprisingly, the biggest sporting competition in the US attracts the highest amount of revenue in sponsorship deals, with the NFL bagging a total of $1.1bn.

Conrad Wiacek, head of sponsorship at sports intelligence company Sportcal, described the NFL as a “juggernaut for sponsorship”.

He added: “The NFL is positioned as the biggest sport in the world’s biggest sponsorship market and has prime time visibility across the entire country, so it is no surprise that the league generates over $1bn annually through sponsorship.”

As the play-offs get into full swing, we take a look at the top 10 biggest NFL sponsors in terms of spend for the 2019-20 season.

US telecommunications firm Verizon has the biggest sponsorship agreement with the NFL.

The $300m deal, which runs until 2023, includes sponsorship and digital media rights.

Verizon has been a partner of the NFL since 2010 and is currently working with the league to bring 5G to all stadiums.

AB InBev, the world’s largest brewer, spends $230m per season as part of its deal with the NFL.

The company owns a number of global beer brands including big names such as Becks, Budweiser, Corona, Leffe and Stella Artois.

Bud Light, its most popular brand in the US, is the official beer for the league and remains the biggest-spending brand in the alcohol sector.

AB Inbev recently celebrated the lifting of an advertising ban, which previously ruled active football players could not appear in adverts promoting beer.

Nike will continue as the official uniform supplier for the upcoming NFL season.

The eight-year contract, which expires in 2028, sees Nike provide the kit for all 32 football teams in the NFL.

Nike holds similar agreements with the National Basketball Association (NBA) and Major League Baseball (MBA), making it the official supplier for the top three sports leagues in the US.

Pepsi ousted its rival Coca-Cola as the official soft drink partner of the NFL in 2002 and has held the contract for 17 years.

The partnership allows Pepsi to use the NFL logo and branding on its advertising campaigns for the soft drink and its other food and beverage brands, including Aquafina, Frito-Lay, Gatorade, Tropicana and Quaker Oats.

Wiacek said: “Partnering with the most popular sports league in its key market allows Pepsi to try and close the gap to market leader Coca-Cola, who have instead gone local and partnered with numerous NFL teams directly.”

The rivalry between the two soda giants reached a peak during the 2019 Superbowl in Atlanta, where Coca-Cola was first invented and has its headquarters.

NFL regulations, which restrict advertising by non-league sponsors, meant that Pepsi got the official branding rights as the Superbowl returned to the home of Coke.

In a first for the NFL, Oakley has become the league’s official helmet visor provider for the 2019-20 season.

All players will be required to wear an Oakley branded visor while on the field.

The sports equipment company, which specialises in eyeware, has reportedly spent $75m for the privilege.

Wiacek added: “Having tested the water by partnering with NFL Most Valuable Player (MVP) Patrick Mahomes, Oakley has now entered into a league-wide deal which is a break from their usual sponsorship strategy focused on individual athletes.”

The use of Oakley’s Prizm technology, which incorporates a pink tint to “enhance colour and contrast”, breaks a rule that has been in place since 1998 banning tinted visors.

While team uniforms will continue to be designed by Nike and will bear the famous swoosh, they will be made-to-order by Fanatics.

Discussing the three-way deal Michelle Micone, senior vice president of consumer products for the NFL, said: “We’re excited to bring together Nike and Fanatics, two partners at the top of their respective fields, to usher in an exciting new model for licensed merchandise.

“By emphasising the strengths of both Nike and Fanatics, we have a model that gives us the ability to offer superior on-field products to the teams and the nimbleness to serve the increasingly real-time expectations of today’s fans who have more control over their choices.”

Gambling and hotel company Caesars Entertainment, owner of the Caesars Palace Hotel in Las Vegas, is the official casino sponsor for the upcoming NFL season.

It will be the first casino partner to the league, marking a change in the NFL’s stance on gambling — an issue which it has previously avoided.

Wiacek said: “The NFL is now also able to generate significant revenues from the gambling and betting sector thanks to the passing of legislation allowing sports betting in numerous states including New Jersey and Nevada.

“The likes of Caesars Entertainment and Gateway Casinos are able to leverage the change in the law to promote themselves to an average TV audience of 16m viewers per game in the regular season.”

Procter & Gamble, owners of the Gillette shaving brand, female sanitary brands Always and Tampax and a number of cleaning and beauty products, renewed its deal with the NFL in 2018.

The five-year partnership extension will see it promote its Febreze, Gillette, Head & Shoulders, and Old Spice brands throughout the NFL season.

P&Gs original deal, worth an estimated $10m per year, was the most expensive sponsorship agreement in the company’s history at the time.

The Canadian gaming brand will also sponsor the NFL Fantasy App for the 2019-20 season.