Terry Toland at Kearney's Global Business Policy Council describes the monumental damage the pandemic has caused on foreign direct investment and whether he thinks it will ever recover. 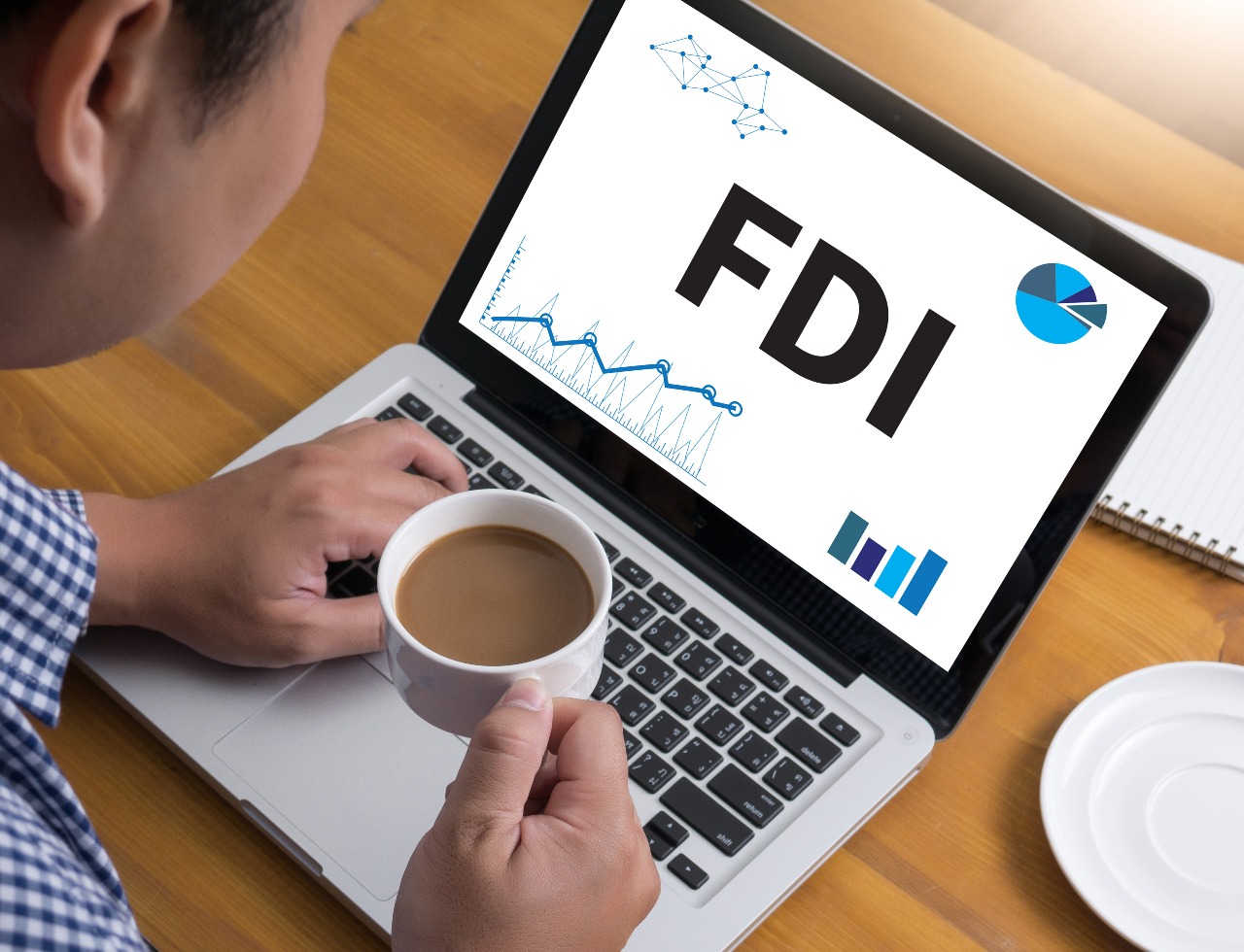 Foreign direct investment has taken another large hit as a result of the pandemic. (Credit: one photo/Shutterstock)

Foreign direct investment (FDI) has never really recovered from its peak before the 2007 financial crisis – yet the extent to which investment has collapsed over the past year is still shocking. With confidence shot, and vaccine roll-out slow across much of the world, the situation doesn’t look much better going forward either.

Andrea Valentino chats to Terry Toland at Kearney’s Global Business Policy Council, about the huge consequences of the pandemic on FDI, what it means for input and output countries, and how environmentalism might re-emerge as a key driver.

One way or another, foreign investment built our world. Cast your mind back to those first multinationals – London’s East India Company, or its rivals in Amsterdam or Lisbon – or think ahead to their successors in the nineteenth century.

From British work on Brazilian electricity lines to the German money that flowed to Arab railways, the modern infrastructure of whole countries is based on investment from abroad. As early as 1914, worldwide FDI was worth around $15bn. Even by 1932, GDP for the whole of China was a mere $28.8bn.

Despite the wars, revolutions and downturns that followed, this trend has broadly continued. Though it’s yet to fully recover after the 2007 crash, FDI in 2019 accounted for $1.39trn, or about 2% of international GDP. The numbers have been especially rosy in developing countries. If Brexit has stymied FDI in the UK, for instance, Russia saw inflows double to $33bn.

It’s a similar story in Brazil, with FDI jumping 26%. Though the numbers in China and the US were less remarkable, in short, it seemed like FDI was finally starting to clamber back to its salad days before the Great Recession, where it was worth a bewildering 5.3% of global economic output.

Then, of course, the pandemic struck. With markets literally in lockdown, outside investment cramped up. And though vaccines might eventually get us out of our basements and back to the pub, the prognosis for FDI remains bleak.

According to work by the United Nations Conference on Trade and Development (UNCTAD), for example, most sectors will likely struggle through 2021. It’s tempting to think of all this just as figures on a chart. Resist that temptation. Especially for developing countries, this drop is likely to cause serious pain – even if the investments that finally emerge are more thoughtful and environmentally aware.

If you had to ask anyone about the present and future of FDI, you could do worse than tap Terry Toland. With a CV that spans the Marshall Fund, the Center for Strategic and International Studies – and even the UK Parliament – he’s done his fair share of work on global markets.

When Toland speaks, in short, it’s worth taking his comments seriously. It’s just a shame that what he has to say (about FDI anyway) is so depressing. “In the near term, we expect that FDI levels will remain depressed, particularly as many profit margins have been squeezed by the pandemic,” explains Toland, the head of thought leadership at Kearney’s Global Business Policy Council.

That’s especially true, he adds, given companies are likely to hold off on big investments until the economic picture gradually becomes sharper. This seems like a reasonable assessment.

But to truly understand the scale of the challenge facing FDI, it’s not enough to analyse the present. Rather, it’s vital to grasp just how far graphs have spiralled over the past year. Look at the numbers: according to the UNCTAD, global FDI dropped by 42% in 2020, a figure rising to 69% across the developed world.

Even in China, with its gigantic industrial base and mercifully brief lockdown, foreign investment slumped by more than a tenth. The reasons for this are easy enough to guess. With lockdowns stopping industry and construction in its tracks, there was little appetite to write more checks.

That’s doubly true in certain countries, particularly in Europe, which have seen wave after wave of restrictions. It’s worth adding, too, that some nations – notably the US – were struggling with FDI even before the pandemic. After then-President Trump pushed major tax cuts through Congress in 2017, investors were less eager to send their money abroad.

Whatever its causes, though, it’s clear that the collapse in FDI is going to have a lasting impact on the balance books of countries worldwide, to say nothing of workers’ paychecks. To take countries of origin first. According to research by the Peterson Institute for International Economics, FDI by US multinationals ultimately leads to higher domestic employment.

Though Apple now assembles its iPhones in China, for instance, around 90% of the profits return to US shores. All told, a 10% in overseas employment can lead to a 4% increase in domestic employment, as well as a 5% rise in research and development (R&D) spending.

At any rate, just as Toland emphasises that “the benefits” of FDI to the donor country are obvious, so too are the dangers when funding dries up. Arguably, things are even more desperate for those countries that receive investment. As Toland notes, the benefits of FDI to these (often developing) nations is undeniable, from increased expertise to capital accumulation.

That’s certainly true for countries like India, where FDI by wealthy Western multinationals has arguably pushed wages for skilled workers up by 10%. At the same time, foreign investment promotes domestic investment, and potentially even doubles it.

This decline in FDI, in other words, risks slashing wages in some of the most deprived places on earth. As an example, FDI has been one main way of cutting poverty in Uganda over the last decade. If foreign taps dry up, though, poor Ugandans may suffer.

Invest in the best

Beyond the grave human consequences, where does all this leave FDI now, and over the next 12 months? You’d have to be brave to put money on anything these days, let alone something as sophisticated as FDI. Even so, there are plenty of reasons to remain pessimistic – beginning with vaccines.

“According to recent reports, about 70 poorer countries will only be able to vaccinate one in ten citizens by the end of this year,” explains Toland. “As such, FDI is likely to take a backseat as fragile macroeconomic conditions will deter many investors. Until economic recovery is underway, many companies will continue to see their profit margins squeezed.”

Another problem is man-made. As Toland puts it: one factor that will “weigh on international investment is the growing number of investment restrictions in several markets, which indicates that geopolitics is becoming a significant FDI driver too”. To understand what he means, you only have to look at Germany, which recently expanded its rules against non-EU takeovers of healthcare companies.

Australia is another example, with the Canberra government lowering the deal value threshold for a government review process of foreign takeovers from $1.1bn to zero. To put it another way, if the EU’s recent foray into vaccine nationalism is one example of how the world is putting up barriers, the increasing popularity of investment nationalism is another.

“The increased regulatory scrutiny, coupled with economic uncertainty and fragility,” summarises Toland, “are likely to keep FDI levels depressed in 2021.” With mountains like these to climb, it’s no wonder analysts are already suggesting that FDI across
2021 will fall by between 5% and 10%. All the same, wallowing in hopelessness is likely unwise. After all, if coronavirus is an economic millstone, it’s also an excuse for governments to boost investment.

That may create opportunities for savvy entrepreneurs, says Toland, with South Korea and Germany both encouraging funding for electric vehicles. China, for its part, has introduced a raft of measures to make FDI more attractive, with new rules covering everything from preferential land prices to lower corporate tax rates. That’s shadowed by similar efforts across the rich world, with France and New Zealand just two of the countries promoting investment in renewable energy.

Not that courageous investors can merely spin a globe and throw money where it stops. On the contrary, Toland suggests it’s likely they’ll focus their efforts on markets where they’re guaranteed decent returns – hardly surprising given the dreary economic climate.

What does that mean in practice? In short: bad news for Uganda and countries like it. As less developed nations struggle to vaccinate their populations, or pass decent stimulus packages, Toland argues FDI will be drawn magnet-like to their wealthier and more effective cousins.

“Over the past year, developed economies have been able to deploy more monetary and fiscal responses due to the bigger size of their economies,” he says. “This will likely lead to comparative stability, and less economic uncertainty in these markets vis-à-vis emerging economies, a lot of which are likely to emerge more slowly from the pandemic.”

Unsurprisingly, the pandemic and its consequences have dominated agendas in boardrooms the world over. Finally, though, we’ll learn to live with the disease and society will creak back to normal. What then? When it comes to FDI, one possibility is that investors will return to their pre-2020 obsession: the environment.

Though Toland admits that the climate crisis was temporarily “forced out of the spotlight” by coronavirus, he’s sure that their fears will reassert themselves eventually. Even as the pandemic raged, after all, a survey by the Global Business Policy Council found that 77% of investors thought climate-related risks would affect their decisions over the next three years.

Once again, this might help wealthier countries. Put it like this: why would investors pump money into the flood-prone Maldives or a fire-ravaged Amazon when they could stick to temperate climes in the Northern Hemisphere?

Even worse, the virus and its consequences might heap pressure on struggling nations to keep up. Despite ramshackle healthcare, manufacturers in Bangladesh have already been pestered to restart production.

Increasingly worried about competition from Cambodia and Vietnam, a prolonged FDI flop in Bangladesh and other poor countries might encourage workers to take even greater risks. On the other hand, a more explicit link between FDI and the health of the planet could force businesses to take climate change more seriously.

In a world where a 1% jump in FDI can add 0.04% to global pollution, and one where the causal link between FDI and CO2 emissions is proven from Nigeria to India, that would be a welcome change. It is, anyway, something to cling onto as the first anniversary of the pandemic passes, unemployment rises, and the lockdowns come and go.