Between them, the two sportswear giants represent two thirds of the total spend on football kit deals 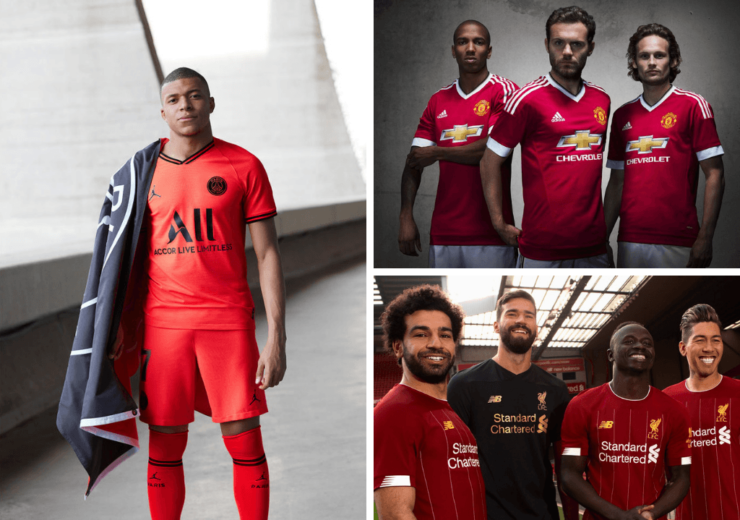 Total sponsorship spend across the 202 kit supplier deals has been estimated at $1.12bn

There have never been more companies competing for a share of the $1.12bn football kit sponsorship market, but it’s Nike and Adidas who continue to dominate the front of football tops across Europe.

The pair account for 66% of the total market spend across the top two divisions in England, France, Germany, Italy and Spain.

Sport marketing intelligence firm Sportcal’s head of sponsorship Conrad Wiacek said: “Nike and Adidas are by far and away the market leaders in the kit supplier space.

“Not only do they have the most agreements and account for over 66% of the spend in this sector across the deals analysed, they also have deals with the highest profile clubs including the likes of Real Madrid, Manchester United and Barcelona.

“Having the ability to leverage huge clubs such as these in marketing and promotional efforts clearly gives Nike and Adidas a huge advantage in maintaining their dominant market positions.”

The majority of sponsorship spend was invested in Premier League teams, which benefitted from $428.8m in kit deals — 43% of the total spend.

Adidas increased its spend on football kit deals by 39%, as it secured new agreements with Juventus and Arsenal.

Conrad Wiacek said: “Kit supplier agreements in Europe became increasingly important for Adidas as it began to lose ground to main rival Nike, especially in the US market.

“Adidas’ then record-breaking deal with Manchester United in 2015 signalled the start of its intent to become the biggest brand in the market.

“New agreements with mammoth teams Juventus and Arsenal and renewals with Bayern Munich and Real Madrid have since solidified Adidas’ position.”

The German sportswear brand has a total of 27 deals across the ten leagues, the majority of which are from the Spanish Segunda Division and the Premier League, with six apiece.

Half of Nike’s budget went towards its headline kit deal with Barcelona, which is valued at $174.8m.

Wiacek added: “Kit supplier deals in the English Premier League have become of greater importance to Nike following the increasing popularity of the league in its second most profitable market — Greater China.

“The league is the second most watched competition in the region, only behind the NBA in which Nike is also a major kit supplier.”

The impact of a successful partnership between kit supplier and football club was demonstrated by Nike’s deal with Paris Saint Germain.

Shirt sales increased by 470% during the 2018-19 season and Nike has also leveraged its Jordan branding on PSG kits.

With 21 deals and a net spend of $160.5m, Puma is the third largest player in the kit sponsor market.

When combined with the spend of Nike and Adidas, the trio contributed to 80.8% of total market spend.

Puma is also committed to partnerships with clubs further down the football pyramid, with 43% of its kit deals coming from teams that ply their trade in the second tier of the game in England, Germany and Spain.

Despite only having four deals, New Balance beats the likes of Macron and Kappa in terms of spend.

The self-styled challenger sports brand has opted to focus on a few key deals rather than spread its funds across a number of club kits.

However the partnership, which began in 2015-16, is set to expire at the end of the current season and Liverpool are expected to cash in on their Champions League success by courting a new kit supplier capable of paying a higher amount.

Wiacek added: “New Balance highlights the challenge of attempting to break into the elite level of kit suppliers, with only a handful of deals, but the average value of its deals puts them ahead of Puma in terms of average spend.”

British sportswear brand Umbro has 17 kit sponsor deals for the 2019-20 season, the majority of which are in the top two English leagues.

Wiacek believes this is a result of the brand’s strong heritage in its home nation, meaning that it can compete with the bigger international sports suppliers in its domestic market.

Umbro’s most notable agreements are with West Ham United and Everton.

Outside the UK Umbro has doubled its presence in France and also has partnership deals with Schalke and Werder Bremen in Germany. 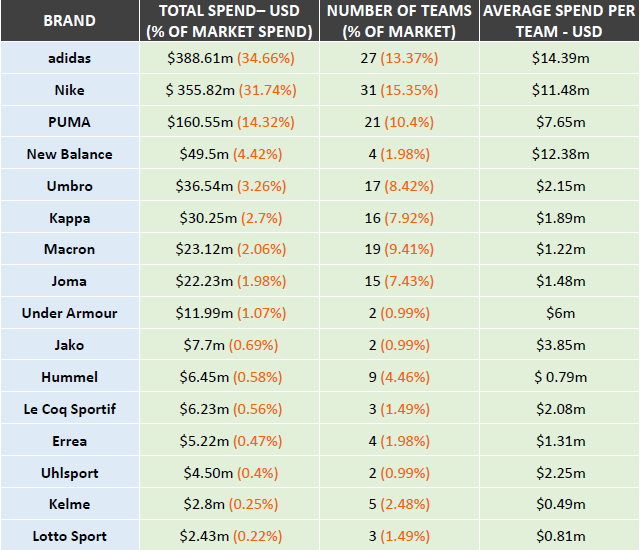 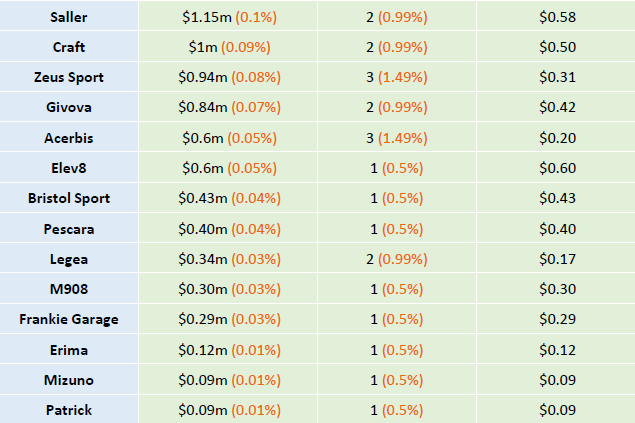