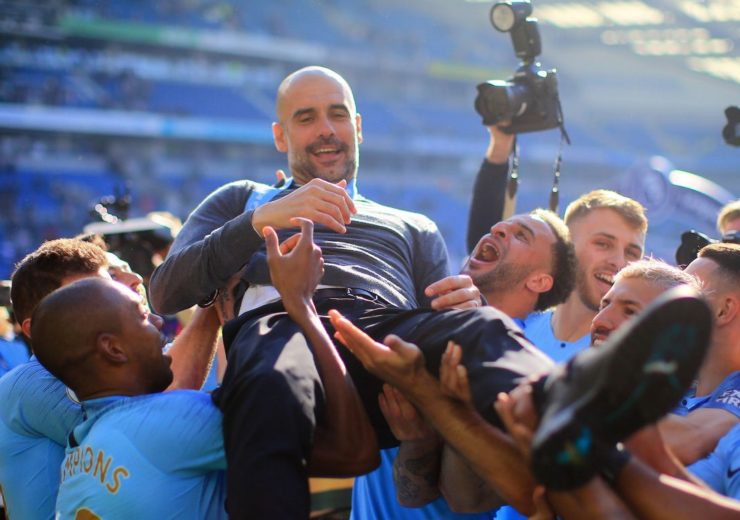 The new Premier League season kicks off on Friday, 9 August, and many of England’s top football clubs have spent a busy close-season signing new players — and lucrative sponsorship deals.

With a global audience of 3.2 billion, the English Premier League provides an almost unmatched opportunity for companies to get their names seen by billions of football fans around the globe.

Some 442 sponsorship deals have been signed across the league’s 20 teams ahead of the 2019/20 season.

The combined value of these deals stands at $1.32bn, with Manchester United demanding the highest investment, followed by Chelsea and Manchester City.

Sport marketing intelligence firm Sportcal’s head of sponsorship Conrad Wiacek said: “Due to the Premier League’s massive global appeal, many brands see the league and its associated clubs as the ideal marketing platform.

“Football has traditionally been seen as a working class sport, but the new reality is that, for many brands, the league offers access to an increasingly affluent fan base.

“The opportunities afforded by modern stadia in terms of corporate hospitality and luxury experiences mean that many businesses will use the sport as a means of reaching their target audiences through targeted partnerships.”

Which industries  are attracted by Premier League sponsorship deals?

Financial services is the most active sector in the league, with 65 major deals, while international brewery Heineken and online investment platform Etoro are the two most prominent brands, with six unique deals apiece.

The global appeal of the Premier League, is reflected in sponsorship deals across the 20 clubs.

Asian companies appear on the front of 60% of Premier League football shirts, with this  area of real estate worth more than $450million.

The rise of gambling companies occupying this space can also be seen when comparing the most common shirt sponsors across the years.

None of the league’s teams shared their shirt with a gambling sponsor, but by 2009 this had jumped to seven and now half of Premier League kits bear the name of a betting firm.

The club that is perennially mocked for coming fourth in the title race have — you guessed it — received the fourth highest amount from sponsorship deals.

The club’s $163.2m revenue came from companies operating in areas such as technology, financial services, beverages and travel.

Its lead sponsors for this season are Adidas, Emirates Airlines and Visit Rwanda.

Birmingham-based club Aston Villa are one of the promoted clubs heading into the Premier League.

Villa’s big spending in the transfer window — estimated to be in excess of $150m — has not been matched by the value of its commercial deals, which amount to just over $15m.

Seven of the club’s 12 sponsors are based in the UK, with W88 and Kappa its principal partners for the upcoming season.

South coast club Bournemouth have brought in an estimated $18.33m in sponsorship revenue ahead of the new season.

The principal partners for the club are betting firm M88 and health insurance company Vitality — which also owns the naming rights to Bournemouth’s stadium.

Brighton have a high number of sponsors at 25, yet the combined value of the deals amounts to a modest $11.37m — placing them 17th on the league rankings.

The club’s 2013 deal with American Express was the biggest in its history. The bank now holds naming rights over the stadium as well as appearing on the front of player’s shirts.

Other prominent partners include Nike, JD, Etoro and Heineken.

Despite a seventh place finish in the 2017/18 season, Burnley have managed to generate just $7.87m from sponsorship deals.

Its two main sponsors for the 2019/20 campaign will be Umbro and LoveBet — its only non-European partner.

Of its ten sponsors, eight are based in the UK.

Chelsea are a distant second in terms of sponsorship revenue, generating $179m from 12 sponsors.

The US market has been the most prosperous for Chelsea, with five of its sponsors based there.

The total value of Palace’s sponsor deals is estimated to be worth over $20m.

Everton have a global spread of sponsors, with 15 from companies spanning four continents.

The club finishes a respectable seventh in terms of its $43.425m revenue generated from sponsors, but this is less than half of its nearest competitor Tottenham Hotspur

Leicester City’s Thai owners have helped generate interest in the club from Thailand — five of its native companies have signed deals.

Thai travel company King Power, which owns the club, retains its title sponsorship as well as naming rights to its stadium.

The club made more than $125m from commercial deals, placing the Reds as fifth most successful for sponsor revenue.

Financial services companies are the most prolific spenders, with three of its biggest deals — front-of-shirt, sleeve and training kit sponsor — coming from the sector.

Last season’s Premier League winners, Manchester City have secured the most unique deals, with 48 sponsors signing up for the 2019/20 season.

City have generated $170m from deals with Etihad Airways, Puma, Nissan, EA Sports and streaming service DAZN, among others.

The prominence of regional partners in its portfolio is partly a result of the club opening 11 global offices.

The club managed to secure the most lucrative kit deal, with the Adidas partnership worth an estimated $101.2m. They also have a front-of-shirt deal with Chevrolet worth $78.86m.

Some 15 of its 46 sponsor deals come from businesses involved in financial services.

Newcastle’s 14 sponsorship deals are spread across companies from nine different industries, the majority of which are British (76.92%).

Chinese betting company Fun88 is one of the club’s primary partners. Its deal with the Magpies was the biggest in the club’s history.

The Canaries have 34 sponsors, the highest number of the three promoted clubs, bringing the Norfolk outfit a combined revenue of $12m.

The club focused on local companies for its range of secondary sponsors, including Park Farm Hotel, department store Jarrold, and Bullards Handcrafted Gin.

The 2019/20 season marks the first top-flight appearance for Sheffield United since 2007.

The newly promoted club have made the fewest deals, with a total of seven sponsors generating the league’s lowest revenue at $4.275m.

Its current partners include Ramsdens Currency, Adidas and Ladbrokes.

Southampton’s 16 sponsors have brought in close to $23m in revenue for the Saints.

Those sponsors are predominantly British based, with home brands accounting for 87.5% of its deals.

Ahead of Tottenham’s first full season in its new stadium, the club have secured 40 sponsors, with AIA, Nike and William Hill among its official partners.

The three-year deal with main club sponsor Sportsbet.io became the largest in Watford’s history, after a $24m deal was struck between the Hornets and the cryptocurrency investment platform.

The amount of revenue from the partnership will be spread over the deal’s lifetime.

The club’s remaining eight sponsors helped to bring the total revenue to $17m.

The main partners for the upcoming season are Betway, Umbro and financial services firm Basset and Gold.

Wolverhampton Wanderers will be looking to build upon their seventh place finish for their second consecutive season in the league.

Chinese owners Fosun International, who purchased the club in 2016 for $54m, have helped to bring new success to the West Midlands team.

Its 16 sponsors, which include ManBetX, Adidas and the University of Wolverhampton, have made the club an estimated $17.7m in revenue.