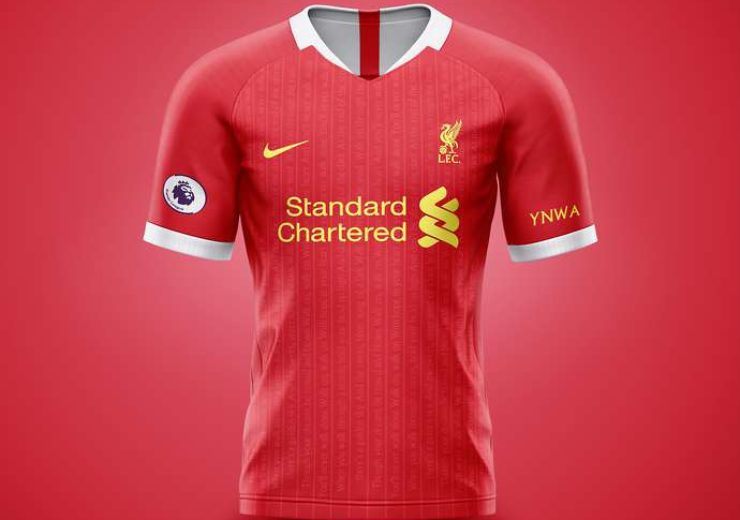 A mock-up for how a Liverpool kit supplied by Nike could look. The concept was designed by Adam Presents (Credit: Adam Presents)

Liverpool could set a Premier League record if it signs a new kit sponsorship deal with Nike, believes an industry expert.

The Reds are rumoured to be close to an agreement with the US sportswear giant to begin next season and Conrad Wiacek, head of sponsorship at sports intelligence agency Sportcal, believes it could be worth up to $110m (£90m) per season.

This would overtake Manchester United’s deal with Adidas, which is valued at $101.2m (£83m) annually.

Current kit supplier New Balance, which is reported to be paying $55m (£45m) for the 2019-20 season, has an option to match any offer for a renewal.

But Wiacek believes it will ultimately be Nike – which also faces competition from Adidas and Puma – that wins the battle of the sportswear companies to have their logo on the shirt of last season’s UEFA Champions League winners.

He said: “In terms of value, I would think they would be looking at $90m to $110m per season which would put them in the Man United bracket.

“Given that PSG got just shy of $100m from Nike, this would seem to make sense.”

Why Nike is favourite for the new Liverpool kit deal

Liverpool’s existing deal, even with its elevated value for this season, is below the earnings for Manchester United, Manchester City ($86m), Arsenal ($79m) and Chelsea ($73m).

In the Premier League, Adidas – one of the main challengers to Nike – already supplies two of Liverpool’s biggest rivals in Man United and Arsenal.

Puma could be looking for another big deal – its $86m backing of Man City dwarves its next most valuable deal with Marseille, on which it spends $15m – but could be priced out of the market for one of the most well-supported clubs in the world.

Wiacek said: “Liverpool are looking to join the European elite in terms of the value of their next kit supplier deal, especially in light of their recent success.

“While Manchester United’s deal with Adidas has been the benchmark in the Premier League for a long time, Liverpool will be looking to eclipse that deal and get closer to the values generated by Real Madrid and Barcelona.

“As one of the most storied and successful football clubs in the world, Liverpool have been in talks with brands including Nike, Adidas and Puma as they seek to increase the value of their current deal with New Balance.

“Puma seems like a good fit from a brand culture point of view but I think the deal will be signed with Nike.”

New Balance has been Liverpool’s kit supplier since the 2015-16 season. The initial deal was worth $41m but is believed to have grown to $55m following the club’s success on the pitch.

Having finished sixth in the Premier League campaign prior to the deal and eighth in the first year, manager Jurgen Klopp has since guided the club to two successive Champions League finals and a record-high points total for a second-placed Premier League side with 97 points last season.

New Balance’s partnership with Liverpool has made sense on a number of grounds, given it shares its Boston home with the club’s owner Fenway Sports Group – also parent of the Boston Red Sox.

Like fellow US brand Under Armour, it views itself as a challenger brand to the likes of Nike and Adidas and product executive Joe Preston has previously spoken about aiming to “earn that number three spot”.

Wiacek points out that the brand has adopted a policy of “quality over quantity when it comes to kit supplier agreements”.

New Balance, which also owns Liverpool’s previous supplier Warrior, has only sponsored four teams for the 2019-20 season and yet is the fourth highest spender across 202 kit deals analysed for a new report by Sportcal in the top two divisions of Europe’s five biggest leagues.

“This policy, however, has seemingly paid off as its headline agreement with Liverpool has helped the brand to become one of the most well-known sportswear brands around the world despite its comparatively low presence,” said Wiacek.

“While New Balance is a long-term partner of the club and have the right to match any offer, given the substantial increase that Liverpool will be expecting, it would be unlikely if the brand was able to continue the relationship.”