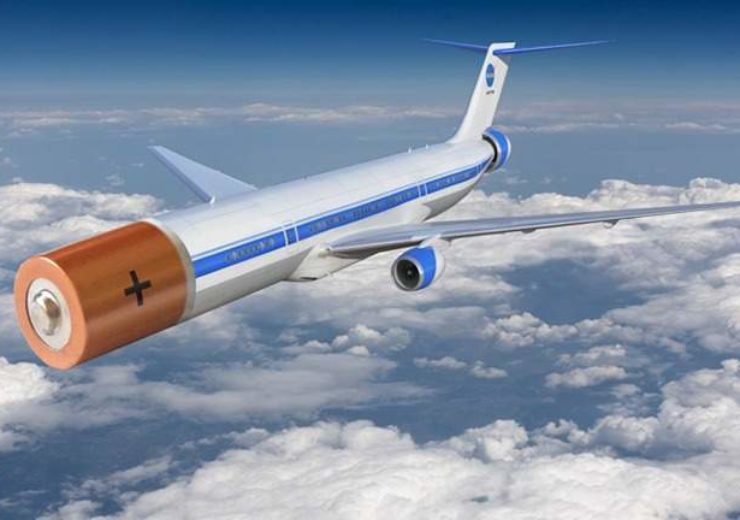 Battery-powered electric aircraft could be the future of aviation - at least in short haul (Credit: NASA)

EasyJet, Boeing and Siemens are among the companies making electric aircraft as aviation explores new ways to go green.

The industry is a major contributor to carbon emissions, generating more than 600 million tonnes of carbon dioxide a year and, if capacity continues to increase at the same rate, it will consume a quarter of the world’s carbon budget by 2050.

Frequent flyers are coming more under the microscope as “flight shaming” has been added to the climate change lexicon amid protests by campaign groups like Extinction Rebellion over its environmental impact.

It led to a weakened demand for air travel in Europe in 2019, while there could also be regulation to consider.

At the start of the last decade, the European Commission set out ambitious targets for aviation industry to meet by 2050, including a 75% reduction in CO2 emissions per passenger kilometre and a 90% reduction in nitrous oxide emissions.

With that in mind, aviation may well need to change soon by following in the footsteps of the electric vehicle boom currently underway across the automotive industry.

Plane manufacturers, commercial airlines and start-ups are already in a race to produce the world’s first electric aircraft – as well as planes that use hybrid or hydrogen-fuelled engines.

The reason they’re not quite so far advanced as the automotive industry, however, is due to the reliance on battery power.

Andrew Murphy, aviation manager at Transport and Environment (T&E), a European non-governmental group for cleaner transport, explains: “The problem with aviation is that the batteries are very heavy so you wouldn’t be able to fly a very long distance with a battery-powered electric aircraft.

“The other important feature of liquid fuels is that they are burned through the course of the flight. Therefore, the aircraft becomes lighter as the flight goes on and can travel a further distance.”

It is for this reason that many of the companies making electric planes are focusing on short-haul journeys – which produce more than 40% of aviation emissions – with the hope that a lighter battery will become available as the technology develops.

But with the work of electric aircraft companies getting more urgent by the day, we profile some of the top innovators aiming for take-off.

Electric aircraft companies and their projects

European budget airline easyJet partnered with US-based start-up Wright Electric in 2017 with the ambition of creating an electric commercial plane for short-haul flights.

EasyJet wants electric aircraft to fly routes of about 500km, including Europe’s second busiest journey from London to Amsterdam, in a bid to achieve a 10% cut in carbon emissions for passenger per kilometre by 2022.

Electrifying its Airbus A320neo fleet could also have a 50% lower noise footprint on take-off and landing.

Speaking in 2018, easyJet CEO Johan Lundgren said: “Looking forward, the technological advancements in electric flying are truly exciting and it is moving fast.

“From the two-seater aircraft, which is already flying, to the nine-seater, which will fly next year, electric flying is becoming a reality and we can now foresee a future that is not exclusively dependent on jet fuel.”

Wright Electric which has a goal to help make aviation emission-free within 20 years – initially worked on electrifying two and nine-seater planes, before moving on to bigger aircraft.

In January 2020, the company said it was working on electrical systems that would be big enough for a commercial flight carrying 186 passengers and it would build a 1.5-megawatt (MW) electric motor.

Wright chief executive Jeffrey Engler said: “As with anything in aerospace, it’s daunting, and we know we have lots of work ahead of us.

“At the same time, we believe in a future of low-emission aviation, and our team is working as hard as possible to get there.”

Three heavyweights from the aviation, technology and engineering industries have teamed up to develop a hybrid-electric propulsion system for a commercial aircraft.

The partnership between Rolls-Royce, Airbus and Siemens was announced in 2017, and pledged their shared commitment to meeting the goals of the European Commission’s Flightpath 2050 vision to develop cleaner aircraft.

The aim is to create a 2MW electric motor – roughly equivalent to 10 medium-sized cars – that will power the E-Fan X, which is expected to embark on its first flight in 2021.

The electric propulsion unit is energised by a power generation system and battery, which will work together to supply fuel when high power is required during take-off.

Rolls-Royce chief technology officer Paul Stein said: “This is an exciting time for us as this technological advancement will result in Rolls-Royce creating the world’s most powerful flying generator.”

The British engineering giant will be responsible for the turbo-shaft engine, 2MW generator and power electronics, while Siemens will deliver the 2MW electric motors and their power units.

Airbus will work on the integration of the electric propulsion systems into the aircraft.

US space agency NASA is developing what it hopes will be the first all-electric plane.

The aircraft, called X-57 Maxwell, is being developed to demonstrate the benefits of electrical propulsion for the aviation industry.

NASA claims the X-57 Maxwell will produce a “500% increase in high-speed cruise efficiency, zero in-flight carbon emissions, and a flight that is much quieter for the community on the ground”.

The twin-engine propeller aircraft will use 14 electric motors along the wings and be powered solely by rechargeable lithium-ion batteries.

It has been under development since 2015 and a prototype was previewed to journalists in 2019, with hopes of a test flight during the third quarter of 2020.

The two-seater Alpha Electro G2 took Norway’s minister of transport and communications Ketil Solvik-Olsen on its maiden flight in June 2018.

It now hopes to have the first passengers flying in electric planes by 2025, with a longer-term plan to electrify Norwegian domestic aviation by 2040.

But the project suffered a setback in August 2019 when a test plane carrying a junior government minister crashed into a lake in Norway after the aircraft reportedly lost all power from the engines when approaching an airport to land.

Both the pilot and passenger escaped unharmed.

Instead of creating an electric system for existing aircraft, Eviation is looking to increase efficiencies by drawing up a new plane design.

Through a proposed 100% electric and zero-emission craft, code-named Alice, it features one main propeller at the rear and two “pusher propellers” on the wingtips to reduce drag.

The 40ft-long craft can fly 1,046km (650 miles) on a single charge of its 900 kilowatt-hours (kWh) lithium-ion battery, which is about nine-times bigger than Tesla’s largest car battery.

At the Paris Air Show in June 2019, Eviation announced it had signed a deal to supply US regional carrier Cape Air with a “double-digit” number of planes, which each cost about $4m.

The start-up has carried out test flights and hopes to receive certification by 2021, with shipping for commercial use to begin in 2022.

As well as working alongside NASA in creating the aerodynamic innovations for the space agency’s X-57 Maxwell, the Californian start-up is also working on its own electric flying taxi programme.

The ultimate aim for Joby Aviation is to create an eVTOL (electric vertical take-off and landing) craft that is capable of transporting four passengers to their destination at 200mph (322km/h) and with zero emissions.

The small aircraft will have a flight speed twice that of a helicopter, which it will be most like in appearance.

It will have five seats and be capable of flying 150 miles (240km) on a single charge – while apparently 100-times quieter than conventional aircraft during take-off and landing.

Joby Aviation, founded in 2009, hopes to reduce costs by minimising fuel and operating expenses, which it argues are a “significant component” of air travel costs.

The company, which has begun full flight tests of production prototypes, is also working on an app that will enable passengers to book a flight on demand.

In January 2020, Joby announced it had raised $590m in Series C funding, including $394m from Toyota Motor Corporation – which will offer its vehicle manufacturing expertise. It brought total funding to $720m.

Its Ampaire Electric EEL is powered by an electric propulsion system by replacing the rear piston engine of the Cessna 337 Skymaster – a twin-engine, push-pull aircraft – with an electric motor powered by a battery in a parallel hybrid configuration.

The company claims it will cut fuel costs by 90% and maintenance in half, while take-off and landings will be 66% quieter. There will also be zero tailpipe emissions.

The company says it has already tested the aircraft and claims it will be the first electric plane manufacturer to be granted certification, enter commercial production and launch a full service.

Speaking at the Farnborough Air Show 2018 shortly after the test flight, designer and CEO Tomas Brødreskift said: “It was a fantastic day for the team, and marks the real beginning of the test programme for the aircraft prototype.

US multinational corporation Boeing and low-cost airline jetBlue have backed Zunum Aero – a New York start-up which is developing a hybrid electric plane.

The 12-seater craft, which is designed for short-haul commutes that could open up more routes and speed up airport departures, began flight testing in 2019.

Zunum Aero, which claims its planes will have 80% lower noise and carbon emissions, has said it hopes to market to regional airlines some time in the 2020s.

Matt Knapp, co-founder of the Seattle-based start-up, said: “We have experienced a groundswell of interest in our aircraft, across the aviation sector and around the world, ranging from regional carriers and business aviation to corporate fleets and cargo operators.”

Despite the early promise though, it was reported by Forbes in July 2019 that Boeing and jetBlue – which had invested $6.2m in Zunum Aero in 2017 – were unwilling to bankroll the company any further, with Boeing taking a more “passive approach” to the relationship.

Almost all its 70-strong workforce were said to have been laid off at the end of 2018, with operations grinding to a halt.