The week-long trade exhibit, part of the Farnborough Airshow, is showcasing some of the most innovative tech in the UK aerospace industry as investors from around the world flock to stake a claim 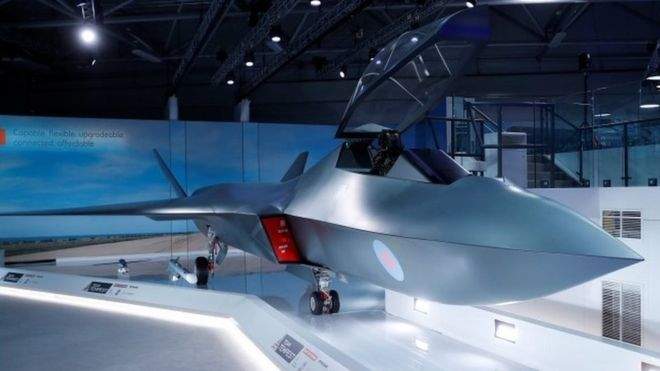 A model of the Tempest

Flying taxis, solar-powered planes and a fighter jet that shoots lasers – these are just some of the new innovations on show at the Farnborough Airshow.

The week-long trade show, which began on Monday (16 July), gathers the best and brightest in aircraft development, attracting the industry’s most cutting-edge tech, as well as billions of pounds worth of investment deals.

As companies like Airbus and Boeing, in addition to the UK government, continue to unveil what they’re working on, we take a look at some of the most exciting announcements so far.

Designer and CEO Tomas Brødreskift said: “It was a fantastic day for the team, and marks the real beginning of the test program for the aircraft prototype.

A model of the UK’s newest fighter jet, the Tempest, was shown this week as Defence Secretary Gavin Williamson said the it could be used either with pilots or as a autonomous drone.

It is set to replace the current Typhoon jet and will be developed by BAE Systems, Rolls-Royce, Italian aerospace firm Leonardo and missiles specialist MBDA.

Mr Williamson confirmed a UK investment of £2bn for the jet, which is designed to be difficult to detect by radar and will use concentrated bursts of laser, microwave or particle beam energy as its weapon.

He said: “We [the UK] have been a world leader in the combat air sector for a century, with an enviable array of skills and technology, and this strategy makes clear that we are determined to make sure it stays that way.

“This project shows our allies that we are open to working together to protect the skies in an increasingly threatening future – and this concept model is just a glimpse into what the future could look like.”

The A’Mhoine Peninsula in Sutherland, northern Scotland, will be home to Britain’s first spaceport.

The money comes as part of a set of grants totalling a potential £50m to accelerate UK space launch capabilities across the country.

Business Secretary Greg Clark, speaking at the airshow, said: “We are one of the best countries in the world for the research, development, manufacturing and application of satellites – big and small.

“And when we see the expansion that is taking place, and the requirement that these satellites need to be launched into orbit – there is an obvious opportunity here for the UK and it must be grasped.”

Rolls-Royce‘s flying taxi, announced on Sunday, could carry up to five people at about 250mph for up to an estimated 500 miles.

The firm is adapting the design for personal and public transport, as well as logistics and military applications.

Built with the Rolls-Royce M250 gas engine found in light fixed-wing aircraft, it would use turbines to generate electricity for six electric propulsors – meaning it won’t require recharging as the batteries would be powered by the M250 turbines.

Once cruise height is reached, the company said propellers on the wing fold away to reduce drag and cabin noise. The aircraft would then switch to two rear propellers for thrust.

The Zephyr is an unmanned solar plane that can stay in flight for weeks on end, announced by Airbus.

The Ministry of Defence (MoD) has already invested courtesy of the aircraft’s remote-sensing capabilities, and it is set to be developed as a communications platform in the future.

It is powered by solar power in the day and then switches to solar-powered batteries to keep it going overnight.

“The Kelleher facility is home to the world’s leading High-Altitude Pseudo Satellite and will be a showcase location, linking to our operational flight bases around the world.

“The Zephyr S aircraft is demonstrably years ahead of any other comparable system and I am beyond proud of the Airbus team for their unrivalled success. Today we have created a new future for stratospheric flight.”

The Zehpyr S is the latest model and is currently in flight about Arizona in the US, where the company plans to fly it for 30 days in order to break its own 14-day record set back in 2010.

Plans for a “sports car for the skies” were unveiled at Farnborough Airshow by Aston Martin in its Volante Vision Concept.

The British supercar manufacturer is working on a futuristic personal aircraft that could hit speeds of 200mph – enabling owners to travel from Birmingham to London city centres in half an hour.

The three-seater craft has vertical take-off and landing capabilities (VTOL) and uses both autonomous piloting and hybrid-electric technology.

“We need to look at alternative solutions to reduce congestion, cut pollution and improve mobility.

“Air travel will be a crucial part in the future of transportation, the Volante Vision Concept is the ultimate luxury mobility solution.”

Rolls-Royce, Cranfield University and Cranfield Aerospace Solutions are also involved in the project, which is currently in the design phase.

But there are hopes a flying version could be showcased at the show in two years’ time.