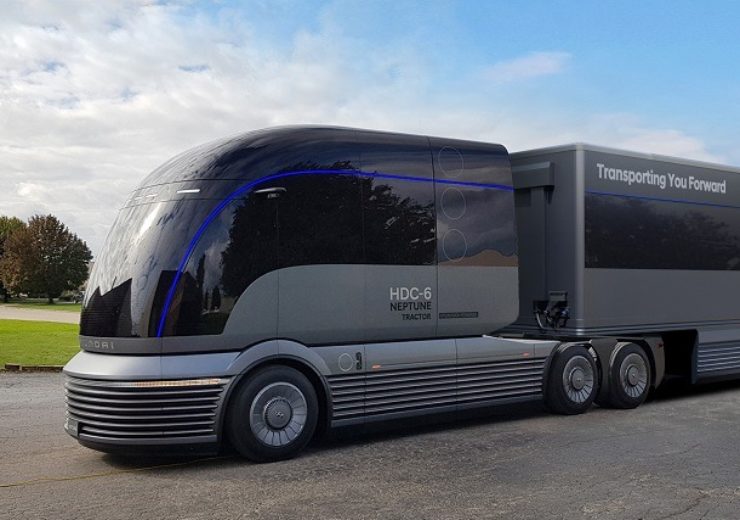 Hyundai is aiming to get 500,000 hydrogen fuel-cell electric vehicles onto roads by 2030 (Credit: Hyundai)

Two new hydrogen fuel-cell trucks made their debut at the North American Commercial Vehicle trade show, with Hyundai and US engineering firm Cummins claiming their zero-emission concepts could signal the future of trucking.

Hyundai unveiled its Neptune concept, a class eight heavy-duty truck capable of transporting up to 14,969 kg of goods, at the show earlier this week.

The concept vehicle is Hyundai’s first entry into the hydrogen-only transport market and follows its aim to produce 700,000 fuel-cell systems annually by 2030, as part of a $6.4bn investment in hydrogen power.

The company claims that hydrogen fuel cells are “the perfect fit for heavy-duty trucks” due to its longer driving range, higher payload and faster refuelling time when compared to all-electric vehicles.

The Neptune could join Hyundai’s Tucson and Nexo hydrogen fuel-cell passenger vehicles on the US market by 2023.

A concept trailer for transporting refrigerated items was also revealed alongside Neptune.

Developed in collaboration with French multinational Air Liquide, it uses cryogenic nitrogen refrigeration technology to reduce the carbon footprint by up to 90% when compared with a traditional unit.

Indiana-based Cummins was the second company to announce a zero-emission heavy-duty truck at the US trade show.

The truck is capable of travelling 150 to 250 miles between refuelling and its range can be extended with additional hydrogen tanks.

Cummins vice president of corporate strategy Thad Ewald said: “Developing this cutting-edge hydrogen fuel-cell truck as a technology demonstrator is an important step in gaining valuable insights that are critical to continue developing the right solutions for the market and preparing for the next 100 years.

“In the long-run, the customers we serve will likely need more than one type of power, depending on their specific markets, applications and use cases.”

The company recently released a memorandum of understanding with Hyundai to collaborate on hydrogen fuel cell technology across commercial markets in the US.

How do hydrogen fuel-cell vehicles work?

Investment in hydrogen has increased across the automobile market as manufacturers seek alternative carbon-neutral solutions to purely electric vehicles.

Audi, BMW, Hyundai, Mercedes-Benz and Toyota are among the manufacturers currently investing in the technology.

Hyundai president of research and development Albert Biermann told Autocar: “We are fully convinced that, to meet the 2050 CO2 targets, without hydrogen it will not be possible to get there.

“We started hydrogen development 20 years ago and we’ve not stopped since. We know it can be very helpful to fix a lot of issues, and with the right sustainable power source, it’s very clean and very green.”

Hydrogen fuel-cell electric vehicles (FCEVs) run on hydrogen gas, which is transformed into electricity when combined with oxygen in the fuel cell, powering the vehicle at the cost of no emissions other than water.

The technology promises faster fill-ups than plug-in electric vehicles and ranges of 300 to 400 miles.

However, the cost of entry for hydrogen vehicles and a lack of re-fuelling infrastructure  is hindering the uptake of such technology.

There are currently 34 public hydrogen fuelling stations in the US, with 31 of those located in California.

The market also remains relatively small, with 6,475 hydrogen-powered vehicles sold between 2013 and 2017.

Hyundai announced that it had invested in three companies developing hydrogen fuel technology in a bid to improve current infrastructure, which in turn could boost uptake.

Hyundai Motor Group president and chief innovation officer Youngcho Chi said: “Our investment in these innovative companies will reduce the production cost of FCEVs and enhance the safety and affordability of hydrogen infrastructure.

“We hope to accelerate the widespread adoption of hydrogen technology by making FCEVs more accessible for our customers.”