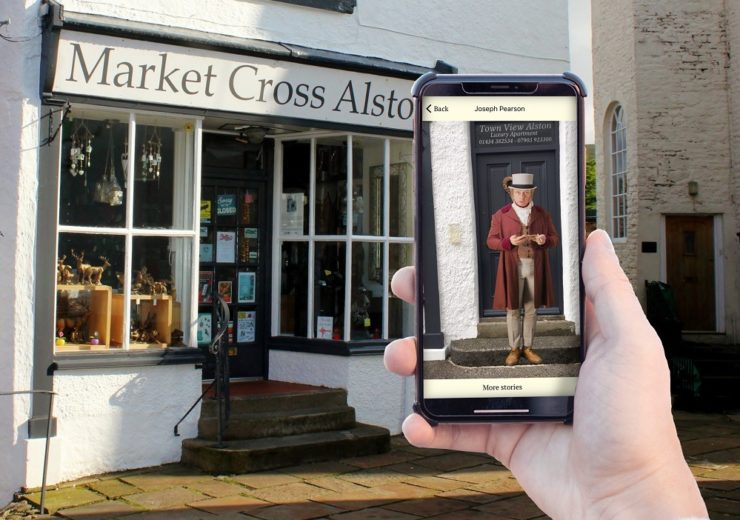 Deep in the UK countryside are numerous heritage sites of national and international significance but attracting visitors can be a challenge. Dan Robinson finds out how a remote area in northern England is using 5G to boost tourism.

Tarun Sainani is wandering around the ancient cobbled lanes of Alston with his mobile phone held out in landscape mode in front of his eyes.

On his screen is his camera’s view of the street scene in front of him, but overlaid with blue flags.

Each one displays the name of a visitor attraction in the rural Cumbrian town, a star rating and distance in metres.

As he pivots his body, the flags change direction to show him which way he needs to walk to reach the destination, while clicking on the box brings up more details about it in the form of text, video and audio.

World Around Me is a local discovery app developed by Sainani that uses augmented reality (AR) to help people discover new places using their phone camera.

“When you see things visually, you can relate better to the environment,” says Sainani, who came up with the idea seven years ago while studying a PhD at Lancaster University and evolved it into his own business called WT InfoTech.

“I first showed it to students at a beer festival to help them find the nearest ATM and they found it really intuitive.

“That was the basic function but we’ve now created an extension that features more interactive content and works well with heritage locations.

“The value of AR is when you’re in a walkable area and it works like having signposts in the road to help you get somewhere.

“It’s like a local search engine and creates more of an emotional connection for tourists.”

He aims to link up with tourism boards to help them keep visitors more engaged to spend longer – and ultimately more money – in towns, villages and other attractions.

Role of 5G in tourism

This mission has now begun after striking a partnership with the North Pennines AONB (Area of Natural Beauty) Partnership, which is part of 5GRIT (5G Rural Integrated Testbed) and promotes tourism in small market towns and villages like Alston.

Located 45 miles west of Newcastle and 30 miles south-east of Carlisle, it shares the title of “highest market town in England” with Buxton, Derbyshire, at about 1,000ft above sea level.

Such remoteness hasn’t traditionally helped its cause when it comes to securing the high-speed internet connections enjoyed in urban areas, but that could be about to change.

The government-backed £4m 5GRIT project, which brings together small businesses and universities, aims to use 5G to reduce digital exclusion across rural communities, improve farming practices and – most importantly for the partnership – boost tourism across England.

Participating companies recognise there is no strong business case for major telecoms providers to bring their best services to the countryside so they are exploring alternative technologies – such as adapting vacant broadcasting frequencies in the wireless spectrum, called TV white space – to activate 5G connections.

Sainani admits 5G is a crucial part of the jigsaw to make the app work.

“This app works in 1G but there’s a lot of rich heritage in the area and amazing geological work,” he says.

“We felt storytelling through video and audio enables us to enhance our service, and having 5G means we can consume that content.”

World Around Me, which is available on both the App Store and Google Play, isn’t the only app being used by the North Pennines AONB Partnership.

It has also teamed up with developer Flo-Culture and even a local school to create Alston Time Traveller and Alston Explorer.

The time traveller app also uses AR as users can match the image on their phone screen with a particular location – such as the market square, Nenthead Mines or Ninebanks Youth Hostel – to activate characters who will give a pottered history of the site.

A postman, miner and tea trader are some of the people who will tell their stories about life in the 1850s.

Alston Explorer, meanwhile, encourages visitors to explore the UNESCO Global Geopark by challenging them to complete tasks, follow trails and collect rewards – combined with old photographs, films and audio that aim to bring the past to life.

The town’s library is also equipped with four virtual reality headsets that perform a similar role in taking people back in time to see how an 18th century corn mill that’s now abandoned appeared in different eras.

For each of these apps to work, a strong internet connection is needed through 5G.

AONB Partnership programme development manager Andy Lees, who is now collaborating with 12 geoparks across Europe to learn more about how to use the technology, says: “It’s been an opportunity for us to try a digital approach in engaging new audiences.

“A lot more people are staying in the UK for holidays now so we’re giving them the tools to find their way around. We want people to feel something towards the area when they visit so they stay here for longer.

“But we’ve learned that you need a really good internet connection to make this app work. For a big trail you’d need good Wi-Fi every 5m but having 5G provides the coverage you need to download the content from the cloud.”

How 5G has improved tourism proposition at Nenthead Mines

One of the actors who plays a 19th century character in the AR apps is Peter Jackson, who also volunteers at Nenthead Mines.

A lead and zinc mine that operated until the 1960s and is famous for its geology, it’s one of the premier attractions in the area and welcomes more than 200 people both underground and on the surface each month.

The 5GRIT project team installed an antenna on its roof that now picks up a strong internet signal and again provides new avenues for attracting visitors and enables the museum and café to offer card payments for the first time.

Jackson says: “It’s run entirely by volunteers but we’re not having to work as hard now. We had to hammer Facebook and try keep the website up to date but now the visitors can do some of that work by sharing pictures and videos on-site to help spread the word.

“In the future, because everyone has a mobile device now I can see us being able to offer a pre-recorded tour on an app and offer it in foreign languages too because we get people from Germany and the Netherlands visiting.

“Historically, if you came to a site like this, you’d have signs and leaflets to help you get around.

“Offering the information on a phone is less intrusive to the artefacts and requires less maintenance. That means it costs less because you just need to maintain the signal.

“Once you start to see what’s possible with 5G here, you realise the great advantage it has for an organisation like ours, and it’s relatively affordable.”