The 5G smart tourism trial was held at the Roman Baths, in Bath, as the West of England Combined Authority is a test bed for the next-generation technology 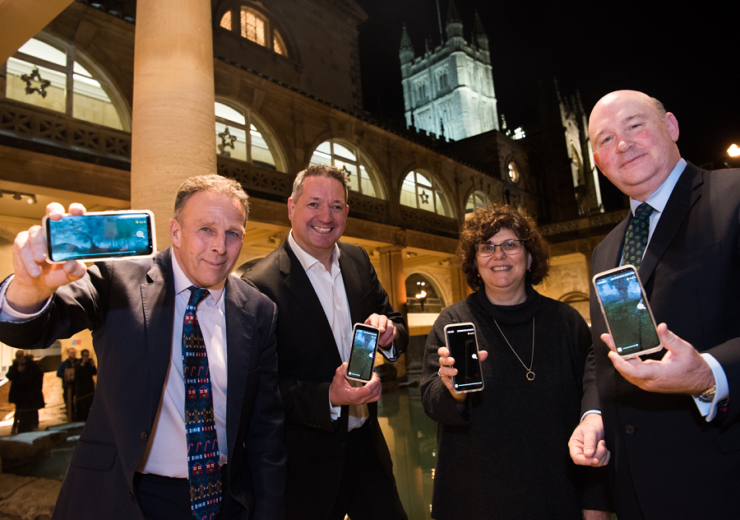 One of the UK’s most popular visitor attractions was the site of the country’s first major 5G trial – in a project promoting the concept of smart tourism.

Visitors to the Roman Baths complex, in Bath, immersed themselves in its rich history using virtual reality (VR) and augmented reality (AR) technologies on a smartphone app.

The trial app told the story of three periods in the UNESCO World Heritage Site’s past – the mythical discovery of the hot springs by King Bladud, the baths falling into disrepair when the Romans left and the renovation in Victorian times.

Each period was recreated by Aardman Animations as an animated 3D scene that played for several minutes, with “hotspots” the user could discover to display interesting information about various parts of the site.

What is the 5G smart tourism project?

The 5G smart tourism project is led by the West of England Combined Authority (WECA) and funded by the Department for Digital, Culture, Media and Sport.

It brings together 25 organisations and involves developing a test bed to demonstrate the capability of 5G – the next-generation connectivity technology that will make internet speeds faster and more reliable.

Digital Minister Margot James, said: “We all want to have fast, reliable and uninterrupted connectivity on-the-go, which is why we’re rolling out 5G test bed projects like this in the Roman Baths.

“The use of the new technology will give legions of visitors in the South West the best interactive experience possible, and will help to make the UK a world leader in 5G.”

Each year, about one million people visit the Roman Baths – which were used for public bathing during the Roman Empire in Britain – and the adjoining Grand Pump Room.

Establishing the West of England as a 5G leader

As well as the Roman Baths project, the WECA-led trial involves additional 5G infrastructure being rolled out in Bristol at the M Shed museum, We The Curious science centre and Millennium Square public space.

Further trials are planned through to March 2019.

West of England Mayor Tim Bowles said: “I am proud our region is playing such a pivotal role in both the development of 5G technology and the exciting first trials of these exciting new wireless services.

“We are ambitious to help support a commercial roll-out of 5G infrastructure across our region and we see 5G as having a role in helping us address mobility across the region and in helping with digital inclusion.

“We are well placed to become a smart region – we are already recognised as a centre of excellence, as home to the largest cluster of digital expertise outside London.

“We are leading the way in technology and our businesses and universities are at the forefront of innovation in next-generation networks, including 5G, such as the University of Bristol Smart Internet Lab where our 5G test bed is hosted.”

Councillor Tim Warren, leader of Bath & North East Somerset Council, which was also involved in the 5G smart tourism project, added: “This is a fantastic opportunity to showcase our wonderful tourism offer – which plays a huge role in the West of England’s thriving economy – and look at ways in which we can enhance the visitor experience.

“We’ve got an impressive team of experts, from the creative and tech sectors, which has developed a really imaginative and immersive experience for mobile users, so it’s brilliant that we can trial this with people in Bath.”

The West of England is the latest region to trial the roll-out of 5G in different ways after the West Midlands Combined Authority was chosen by the government as a test bed in September.

A £50m scheme will experiment with the technology in spaces like autonomous vehicles and emergency services in the cities of Birmingham, Coventry and Wolverhampton.

Wales is also exploring the possibility of rolling it out, with the country’s digital business growth agency Innovation Point working with industry leaders to work out how it can best be implemented.

What are the benefits of 5G?

As well as supporting the visitor economy, super-fast and ultra-reliable 5G is expected to offer an increased level of connectivity and new opportunities for businesses, including better remote working, and is likely to bring significant business growth opportunities for the region’s tech sector.

5G will also support communications between emerging technology that will have a significant impact on people’s lives, allowing the public sector to test new ways of delivering services, and encouraging businesses of all sizes to explore new commercial opportunities.