Digital signage, biometrics and wearable technology are just some of the other applications for OLCD displays 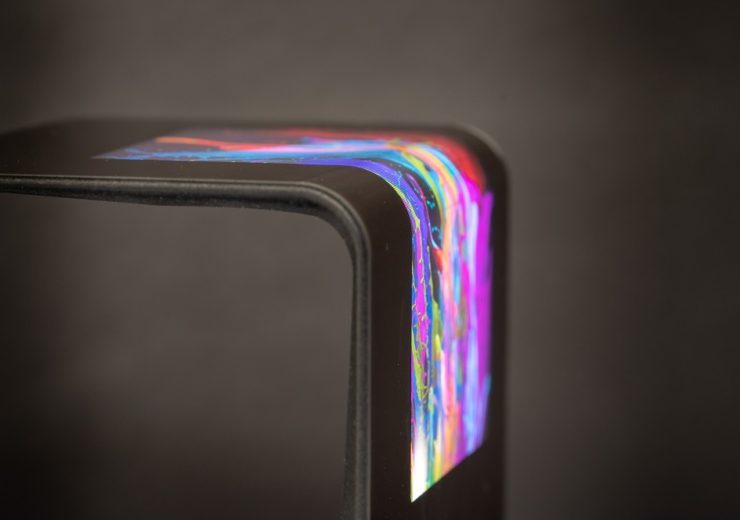 UK manufacturer FlexEnable has designed a new type of material that can replace glass in electronic displays. Dan Robinson finds out from CEO Chuck Milligan how the technology offers greater flexibility in deploying interactive screens in cars, wearables and medical devices.

From the Ford Mustang to the Tesla Model 3, there’s been no small amount of change in the cars we’ve driven over the past half a century.

Yet while the electric windows, air conditioning and keyless entry systems in today’s vehicles illustrate the automotive evolution, there are small details that have remained as intact as their four wheels.

Every car coming off the production line today continues to have a screen in the middle of the dashboard that, for the most part, is the only point of command when it comes to entertainment, viewing rear cameras, and information for weather and traffic information.

This is precisely what FlexEnable wants to change.

Its potential applications range from healthcare and biometrics to televisions and digital signage, but it’s the possibilities in automotive that stir the most excitement for CEO Chuck Milligan.

“It’s a perfect place for OLCD because it can curve over plastic,” he says. “If you sit in a car today, everything is sleek and ergonomic – apart from where it’s constrained by a rectangular piece of glass for the display.

“We can get rid of that with displays that fit into the design of the car rather than designing a car around glass.

“It then opens up so many possibilities for human-machine interfaces that can be accessed by anyone in the car, not just the driver.”

What is FlexEnable? How its OLCD technology works

It lets natural light into indoor spaces, isn’t porous and has a long lifespan – but it’s also very rigid and fragile.

FlexEnable’s mission is to replace the material in large-area electronics to open up more possibilities in how a display is used.

Its alternative is OLCD, a material developed in the University of Cambridge labs that was spun out into a business in 2000.

Until now it has been refining the technology but Milligan, a veteran tech engineer who rose through the ranks in marketing and sales roles before graduating to senior leadership, joined almost five years ago to head up the company as it began to find real-world customers, including some unnamed blue-chips in the automotive industry.

“I was excited by the technology the team had developed, the opportunity it had and the strength of the technical team,” says Milligan.

“You can have displays and devices that are unbreakable, flexible and super-lightweight.

“If we take displays as an example, almost all are based on glass substrates. With that comes a certain amount of rigidity, weight and fragility that you can get rid of with plastic.

Last month, FlexEnable made a key acquisition that will help power its trajectory from R&D and prototyping into production from next year – and at volume by 2021.

Its buyout of German science and technology company Merck’s portfolio of organic thin-film transistor (OTFT) materials has given the company access to 300 patents of organic semiconductors and dielectrics.

The deal was significant for the proposition the UK firm can now offer display manufacturers.

FlexEnable claims to be the only company that has both OFTF materials – which are proven to have higher performance than amorphous silicon, the thin film used as semiconductor material for solar cells and in LCDs – and an entire package of industrially-proven manufacturing processes needed for producing OLCDs of any size.

Milligan explains: “We now have a combination of the best materials for organic electronics, and all the processes and design capabilities to bring those into existing displays.

“We’ve taken on some key members of the team and the existing supply chain, which enables us to supply these materials to customers immediately.

“Until now, we’ve been developing the technology to a high-performance level that’s scalable. We’ve designed prototypes for OEMs, which has created a lot of demand for partner fabricators, and from next year we’ll be supplying key materials.”

Although FlexEnable is restricted by non-disclosure agreements when it comes to confirming client identities, Milligan claims it is working with “several of the world’s top brands in consumer electronics and several of the top automotive OEMs in the world”.

He adds: “The important thing about our technology is that standard LCD technology is already proven to have automotive reliability because it’s used for in-car screens now – so it gives us a strong advantage in this industry.”

Until the 1960s, the passenger side-view mirror was considered a luxury as most roads weren’t paved – meaning the driver only had to be aware of traffic on their side and directly behind them.

No matter whether a vehicle was picked up from a second-hand dealership or it’s the latest supercar model that will set you back six figures, it will be equipped with a wing mirror.

It’s a legal requirement in most countries but Milligan claims it doesn’t have to be a necessity for much longer.

He explains: “The side-mirrors today have many problems. They make cars less aerodynamic so the car uses more fuel, extend the width of the car, leave blind spots and are only useful for the driver.

“If you replace that with a camera that is always pointing in the right place and linked to a screen inside the car, you get rid of the blind spot and everyone can see the same thing, which is good for autonomous cars in the future.

“You could even add augmented reality to it with warning signs overlaid on the screen. You end up with a more useful, efficient, cheaper and safer vehicle.”

To make this an option though, he insists new materials are needed inside the car in order to create curved displays rather than bolting in another glass display.

So where exactly would these interfaces be installed?

Plastics giant Novares has designed a “digital side mirror” in its futuristic Nova Car 2 prototype that uses a FlexEnable OLCD curved display, which is integrated into the corner between the A-pillar – the solid surface between the side window and windshield – instrument panel and door panel.

It’s an interesting idea that car manufacturers could argue actually enhances safety, but it’s just one example of the technology in practice.

Other potential applications are in the “infotainment” space, replacing the glass-made LCD screen in the middle of a dashboard.

These central consoles are often the only remaining flat surfaces in the vehicle, which FlexEnable says disrupts the form and flow of the interior space and limiting ergonomic options for designers.

It’s also often determined a safety hazard in itself by diverting drivers’ attention away from the road.

Instead, Milligan’s team has designed concepts in which there are several touch-sensitive displays throughout the car – including an S-shaped unit that is still on the dashboard but also one that’s placed on the door handle.

“You could put displays all over the car,” he says. “On door handles, the steering wheel, sunroof, back of a seat or head rest.

“It opens up the whole car interior to be smart surfaces that you can interact with rather than being ‘dumb’ surfaces.

“You could display videos and menus, or maybe even tune in how dark or light you want the car to feel – but you could control it from an arm rest in the back of the car.”

Other applications of FlexEnable OLCD technology

While automotive is the space where FlexEnable is probably furthest ahead, it believes the possibilities are endless by opening up new flexible surfaces.

If it can break into the digital signage market, the OLCD technology could soon be everywhere – creating adverts that can be wrapped around pillars, on subway trains or even seats.

The company believes it could also provide a similar picture quality to organic light-emitting diode (OLED) TVs that’s cheaper, while the smart watches of the future could have larger surfaces – and therefore more uses – by conforming to our bodies.

Given that the wearable technology market is forecast to reach $70bn by 2025, according to IDTechEx, FlexEnable believes the ability to make devices “truly wearable” could be key to driving widespread adoption.

Biometrics, meanwhile, could be another interesting field to explore by adding fingerprint sensors on to curved surfaces such as steering wheels – enabling drivers to personalise their experience – or under a mobile phone display enable more elegant designs.

Healthcare is another area Mulligan is “extremely interested in”. The low temperature manufacturing process can create stretchable surfaces that offer much more freedom in integrating electronics than glass-based technology.

X-ray detectors, for example, could be moulded to fit around limbs better to improve scan results, while also reducing their weight.

“We could bring surfaces to life and fit machines around a body in any shape we want,” says Mulligan.

“The fact we could have sensors that are stretchable and bio-compatible could have huge potential in the future.”

Are FlexEnable OLCD displays good for the environment?

Of course, there’s a nagging question that sits awkwardly behind all the sci-fi innovations – does the world need any more plastic?

With 1.2 billion cars on the world’s roads and 150 metric tonnes of plastic circulating our oceans every year, it may not at first glance be something automotive manufacturers should be considering at a time when the emphasis is also on the shift from fossil fuels to electric.

But Milligan is happy to confront the issue head-on, as he adds: “Actually, one of the benefits of our technology is we’re manufacturing at low temperature so we’re taking away the heat needed to make the displays. We believe that makes it a greener solution.

“And if you look at the world of mobility, by taking weight away it results in less fuel consumption. We’re replacing glass, which is a heavier material.

“In electric vehicles, the industry wants to extend the mileage of the cars as much as they can and a big driver there is going to be weight, so we can contribute.

“Our technology is also just as disposable as glass, if not more, so it can be recycled.”

For Mulligan, FlexEnable is entering an exciting era as it now has access to some of the best materials and manufacturing processes in the world.

He adds: “We’ve designed this technology to move into pre-existing fabrications, where hundreds of millions of pounds have already been spent on building new technology.

“We see all the customers waiting and we think more and more will come once they see it on the market.

“This is going to be a hugely important technology in the future – it will become ubiquitous. We don’t even know what some of the applications will be.”