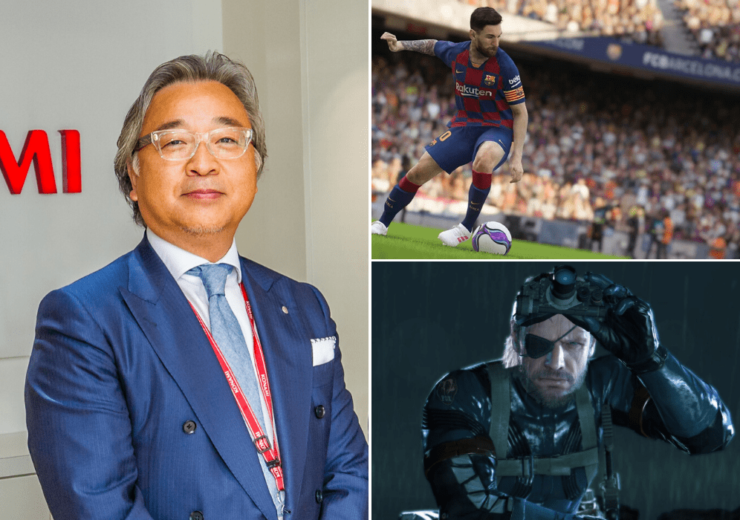 Video gaming is the world’s biggest entertainment industry, while also being one of its least predictable. In 2015, the storied Konami Digital Entertainment decided to take drastic measures to stay ahead of the rapidly changing market. In the process, it left behind much of what made it so beloved. But after five consecutive years of profit growth, it’s clear that the risk is paying off. CEO Journal writer Tim Gunn asks European president Masami Saso how the company reinvented itself and what the future holds.

For the most part, successful video games stick to simple stories: the hunter becomes the hunted, the hedgehog moves quickly and the American saves the world. It’s all tied up with a short video, and then the credits roll. But that’s not Konami’s style.

Ever since the 1980s, the Japanese entertainment conglomerate’s most successful and acclaimed games have pushed harder than almost any others at the boundary separating them from cinema.

Take the Castlevania series, a classic horror rendering of the 1,000-year story of a vampire-killing whip; or the Silent Hill franchise, which referenced Lolita and Crime and Punishment in its hallucinatory exploration of small-town sexual repression.

Then there’s Metal Gear Solid 4: Guns of the Patriots, which actually ends with a full 71 minutes of expositional film. A salesman with a monkey explains that the plucky heroes were funded by the bad guys all along; the world’s arms dealers join the UN; the grave actually holds the remains of the 43rd US president; the dead supersoldier father returns to his suicidal supersoldier son and explains how his body was reconstructed from his other clone children (one of whom was the aforementioned president); the father then dies from contact with the son, who quits smoking; and a child called Sunny fries eggs the way her name suggests she should.

In its full, confounding glory, that sequence holds the Guinness world record for the longest non-interactive section in video game history. In total, MGS4 includes close to nine hours of purely cinematic scenes, or somewhere between three and six feature films’ worth of content. It comes with a game, too.

Flippant as that sounds, the self-conscious, self-satirising Metal Gear series is Konami’s signature achievement. At its best and most beloved, it also exemplifies a business model that the company seems to have left behind.

How Konami changed the future with ‘unthinkable’ Hideo Kojima sacking

Having done as much as any other publisher to put games on the same cultural level as film, Konami was also one of the first to recognise the limitations of such a high-risk, high-expenditure approach. It’s been up to executives to manage an at-times traumatic change, balancing Konami’s singular identity as a game publisher with its most profitable future as a business.

Set in an alternate 2014, MGS4 tells of a world where nanomachines regulate human behaviour and private military companies hold more power than nation states, keeping the economy afloat with the endless proxy wars they extort out of governments. Thankfully, that reality didn’t come to pass, but the six years that followed the game’s 2008 release made a lot of difference for Konami. That year, it published close to 40 unique console games. In 2014, it published five.

Then, in 2015, the truly unthinkable happened. Shortly before the release of Metal Gear Solid V: The Phantom Pain, the unfinished prequel that tells of a group of soldiers struggling for self-determination, Konami fired series creator Hideo Kojima – arguably the world’s most famous game developer – and completely restructured its video games department (the company’s main revenue driver, although it also includes gambling and fitness arms).

In the west in particular, many gamers are yet to forgive Konami for breaking so unsentimentally with its past. Since then, however, it has released fewer games than ever, and achieved a record-breaking five consecutive years of profit growth.

“The importance of single-player games has not changed,” he explains patiently. “Recently, the variation of game devices increased, and we are providing games such as Pro Evolution Soccer (PES) and Yu-Gi-Oh! across multiple platforms so that our intellectual properties (IPs) reach as many people as possible.”

Those examples weren’t chosen at random. Having shipped over 100 million copies and made close to $6bn since 1995, PES is the only Konami franchise to outsell Metal Gear. Similarly, Yu-Gi-Oh! games have sold over 20 million since 1998, and Duel Links, the first free-to-play mobile game based on the IP, has been downloaded over 90 million times since 2016. With over 25 billion physical cards in circulation, Yu-Gi-Oh! is also the world’s most popular trading card game.

Though both games can be played alone, neither is narrative-driven. Instead, they create extra interest through their interactions with different aspects of popular culture, the first with professional football and the latter with the long-running manga and anime with which it shares its name.

It’s a well-proven model. As Saso points out, more than two decades since the release of the first physical Yu-Gi-Oh! cards, fans still gather in person and online to trade and battle. “While digital games have changed the way we play, card games continue to be a very social experience,” he says. “Players can add, refine and tweak their card deck, making each match completely new.”

By contrast, a single-player blockbuster like MGSV, one of the most expensive ever, was available as a self-contained package, and offered few opportunities for further monetisation.

Today, even that initial sale is more difficult than ever. The importance of single-player games may not have changed, but the development of online video platforms like YouTube and Twitch have completely redefined the context in which they’re bought and sold.

Far from leaning on cinema to assert its cultural importance, video gaming is now larger than music and film combined, and esports, with an expected global audience of 453.8 million in 2019, making it one of the world most popular sports. The industry has become spectator-driven, and many of the world’s biggest influencers rose to prominence by posting or streaming footage of themselves playing games.

Good as it might be for select teenagers, that’s bad news for game developers who tell their stories through extended video clips, which are the same no matter who’s holding the controller. MGSV cut back on the cutscenes and further emphasised creative play in open environments, but, from Konami’s perspective, it was too little (or, at over $80m, too much), too late. By that time, the company knew how it wanted to capitalise.

The future is mobile for Konami

Big-budget development might be riskier than ever, but with powerful smartphones in every palm and pocket, there are far more opportunities for game companies to connect with customers and monetise their interest than ever before. Konami saw that early: it just had to get the business model right.

One of its first attempts to do that was with 2009’s Metal Gear Solid Touch, a $10 mobile version of MGS4 that reimagined scenes from the original game in a different genre and playstyle.

Even before then, stand-alone games for portable consoles like Metal Gear Acid had remodelled the series’ iconic stealth gameplay around a simplified version of the Yu-Gi-Oh! trading card mechanic. Both were moderately successful, but it wasn’t until 2010 that Konami hit upon the approach that made sense for an increasingly digital and gamified world: free-to-play.

The game was Dragon Collection, a mobile and browser-based role-playing card game that cost Konami comparatively little to develop. Within weeks of its release in Japan, it was played on 10 million of the 20 to 30 million devices for which it was available.

As Hideki Hayakawa, the executive producer, later explained to Nikkei Trendy Net, “I strongly felt that mobile devices would soon become the major game platforms, and that our business would depend on running an ‘operation-driven’ model that would allow us to stay abreast of changing customer usage trends and swiftly evolve our games to suit them… We need to shift away from selling only ‘tangible’ products to also providing ‘intangible’ additions.”

The focus on agility and microtransactions proved compelling. In the same restructure that ousted Kojima, Hayakawa was made CEO. With him at the helm, the company changed its game development model into what it calls a “centralised production division system”.

Previously, each of its various production studios would focus on developing titles in one particular genre, with their strategy influenced by creatives and managers alike. That model did lead to Dragon Collection-style mobile games like Metal Gear Solid Social Ops, but, measured against the app market download charts, it was sclerotic.

By bringing all of its studios under central management and focusing its creatives purely on game development, Konami has been better able to monitor and adapt to changing customer interests with new and updated versions of established IPs in different genres, formats and monetisation models. Outside of Japan, where Konami also publishes a number of baseball titles, PES and Yu-Gi-Oh! have been the main beneficiaries of this more systematic approach.

“The PES series is provided in different game designs – action game, card collection game and club management – and is popular worldwide,” explains Saso. “There’s a synergy where long-time fans of the console game are also playing on mobile, and new fans who started with the mobile game are now on consoles. The same goes for the Yu-Gi-Oh! trading card game and Duel Links.”

Indeed, in August, the re-energised Yu-Gi-Oh! fanbase made the Nintendo Switch-exclusive Legacy of the Duelist the top-selling EMEAA retail game in the week of its release.

Overall, it has been a stunning success. For the financial year ending in March 2016, game revenues rose by 36.8% and profits by 110%, though that was partly to do with the release of MGSV.

The next year’s results were more revealing, as revenues fell 8% to $2bn and profits rocketed up 146.8% to $228m (not including Konami’s other revenue streams). Overall net profit broke records in 2018, and it’s still rising, reaching $404.1m for the year to March. By paring down its global operations and focusing on making PES and Yu-Gi-Oh! as responsive and adaptable as possible, Konami has become leaner and considerably more profitable.

But everything comes at a price. Late in 2015, Kojima re-established his production studio as an independent enterprise and hired away many of Konami’s best big-budget game designers. The company’s ability to develop narrative console games was almost completely nullified.

Its 2018 spin-off Metal Gear Survive passed without a trace and, in 2019, Kojima Productions released its eagerly awaited first game with Sony. Called Death Stranding, it was Kojima’s most cinematic yet, with fully motion-captured and digitised versions of Hollywood actors Norman Reedus and Mads Mikkelsen starring as the player-character and antagonist, respectively.

Meanwhile, having established a new basis for its success in a select group of tightly-controlled gaming ecosystems, Konami is now working to reinforce them through esports. The company’s new global headquarters in Tokyo incorporates an esports studio and a specialist school to train a new generation of talent on the other side of the development cycle, namely professional gamers and influencers.

“Esports provide many touchpoints, from participating as a player to cheering on at the venue and watching the live streams,” Saso explains. “We are focusing on them as one of our efforts to expand our IPs to reach more fans.”

Ultimately, by professionalising the culture around its games and developing centralised esports communities, Konami should be able to get an even clearer understanding of how gamers are engaging with its IPs. As Hayakawa put it when he became CEO, “I want us to focus on what the customer usage trends for Konami games are, and be able to tell precisely what customers want from moment to moment.”

It was another unconscious callback. “ID-tagged soldiers carry ID-tagged weapons, use ID-tagged gear,” continues MGS4’s opening monologue. “Everything is monitored and kept under control… And he who controls the battlefield, controls history.”