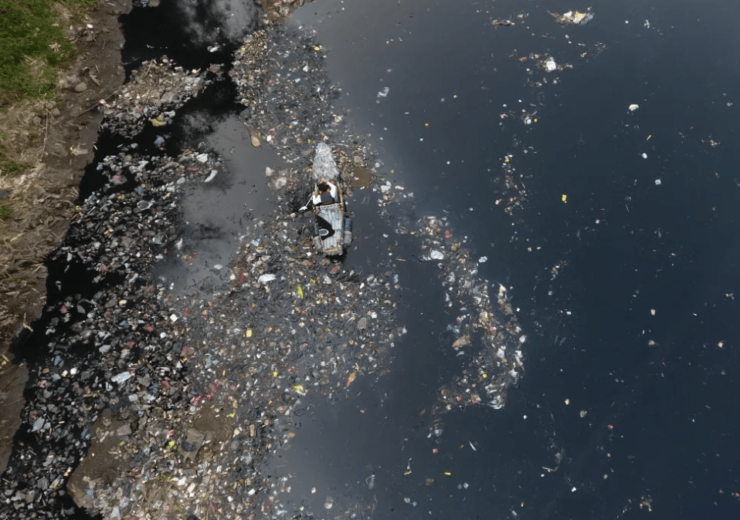 Gary Bencheghib and his younger brother Sam were rowing down the Citarum River, the largest waterway in Indonesia, in bamboo-framed kayaks kept afloat by recycled bottles and netting when they were stopped by a giant, dense mass of plastic waste.

Bottles, bags and other plastic packaging had clogged up parts of the river, which runs for 300km in the east of the capital Jakarta, to such an extent they couldn’t move another metre.

Like the “fatbergs” of congealed cooking fat, grease and wet wipes that have caused blockages in sewers, the so-called “plastic ‘berg” pointed to a very real human input, given that much of the rubbish had apparently been dumped by some of the world’s largest brands’ factories – including H&M, Polo Ralph Lauren, Gap and Zara.

“It was completely unbearable to witness first-hand,” he recalls. “There were piles of trash dumped on both sides of the river, with open fires almost every 300m.

“The water was a rainbow colour and it smelt like rotten egg or dead animal flesh.

“At one point there was a plastic ‘berg – the plastic layers were so thick that when we rowed it was impossible to move a metre.

“If everyone truly experienced the conditions of the Citarum, we’d be in a different place right now.”

Bencheghib, who grew up on the island of Bali, had become accustomed to witnessing the world’s plastic problem on his doorstep, often seeing its most populated beach Kuta dredged in the material after heavy rainfall and high seas.

There are estimated to be more than 50 trillion microplastic particles – 500-times more than the stars in our galaxy – in the world’s oceans, with images of sealife being choked by the material cropping up more frequently in recent years.

In 2015, Indonesia – which has the fourth largest population on the planet with 270 million people, while its $1.11tn GDP puts it 16th in the world – was the world’s second largest contributor to ocean plastic pollution behind only China, according to the World Bank.

But with 81% of waste unsorted and therefore difficult to recycle, much of the waste ends up in landfills or leaks into rivers and the sea. Indeed, 20% of its plastic waste is believed to end up in rivers and coastal waters.

Bencheghib says: “In Indonesia, plastic is really a people problem as it starts on land.

“There’s a minimal budget for waste management – we have open dumps wherever you go, with some of the biggest landfills in the world, and it’s turning our rivers into major dumping grounds.”

It was with this picture in mind that a 14-year-old Bencheghib launched the Make a Change Bali charity a decade ago with Sam and their older sister Kelly.

Initially, it aimed to clean up polluted beaches but after realising the effort-driven movement wasn’t going far and they were “just sweeping the floor in good faith”, they decided more awareness was needed about the issue – leading to its current guise as Make a Change World.

During a summer break in the US, Bencheghib and a group of friends built a “junk raft” made from recycled materials for a two-month sailing adventure along the Mississippi River.

They used the innovatively-assembled vessel to engage with local activists and carried out a study with Indiana State University to discover there were trillions of microplastic particles trickling from the upper Mississippi into the Gulf of Mexico every day.

It was these findings that inspired Bencheghib and his brother’s fact-finding mission in Indonesia’s Citarum River in 2017 and, after producing an online documentary series about their journey, Indonesia’s president Joko Widodo visited the most polluted parts of the river a few weeks later and met the pair.

He vowed to make the Citarum – dubbed the world’s dirtiest river by the World Bank – the “cleanest” river on the planet, with drinkable water, by 2025.

It wants to cut marine plastic debris by 70% by the same year and achieve a plastic pollution-free country by 2040, embracing a circular economy principle in which plastic goods are designed to be reused.

Some 7,000 troops have been deployed to oversee the clean-up as the country declared a “war against plastic”, adopting some no-plastic policies and shutting down between 70 and 100 factories for illegal waste dumping.

Rather than allow the government to get on with the clean-up alone, the Make a Change World charity launched a project last year to install 100 trash booms that will prevent plastics going out to sea.

The barriers, created by Germany environmental start-up Plastic Fischer, are able to physically intercept plastic in rivers, with a daily operation team in place to collect the waste and take it to a mobile sorting station for washing, weighing and sent off for recycling.

Alongside this low-tech solution, the Make a Change World launched a new interactive online platform at Davos called Sungai Watch.

The software uses geographic information system (GIS) mapping and artificial intelligence to monitor the pH levels in rivers in order to measure how acidic the water is.

“When you start doing this and getting reactions from government, one idea leads on to another.”

Rounding off his discussion, he adds: “The truth is that there’s never been a more important time to act than now. Since I started this talk, 200 metric tonnes of plastic pollution will have entered our ocean and it’s so important to take action today.”

As one of the most picturesque places on Earth, Bali is often dubbed the “island of the gods”.

But as Indonesia’s plastic problem has worsened, Melati Wijsen has been among those to instead christen it “the island of garbage”.

“Growing up on the island of Bali, it was hard not to see the problem with plastic pollution grow up with you,” says the 19-year-old.

“Whether that’s taking your first steps on a beach with little flakes of plastic under your bare feet or when you learn to plant rice for the very first time and you realise it’s on top of plastic.

“It’s everywhere – it’s so in your face it’s impossible to escape it.”

In 2013, Wijsen and her sister Isabel launched Bye Bye Plastic Bags, which aims to take action through education, campaigns and political meetings.

Now operating in 29 countries, it is one of the largest youth-led NGOs in Indonesia and claimed a small victory when Bali decided to ban plastic bags, straws and Styrofoam last year.

But the group is conscious that plenty more work is needed to turn regulations written on paper into effective action.

Wijsen, named by Time magazine as one of the world’s most influential teenagers, believes there are too many ready-made excuses, observing how countries at the COP25 climate conference in Madrid last month claimed they needed “more time, more research or more planning”.

“This just masks the fact we already know what we need to do,” she adds. “We need to get out of our comfort zone, act according to the Paris Agreement without any loopholes for governments.

“For the private sector, dig deep into your pockets and budgets so you can wake up knowing you did more than the standard operational procedures.”

Not that change will be easy, she admits, given how success has traditionally been valued through materialistic possessions on an individual level and macro-economically by linear growth in industry, capitalism and globalisation.

Wijsen, who launched the youth empowerment project Youthtopia at the World Economic Forum last week to begin educating future generations about becoming a “changemaker”, says: “Maybe in a different time and in a different world, success did look like that. But for my generation, we stand for ‘more is less’.

“We can no longer continue to exhaust and attack the resources of our planet. We’re at the most important tipping point in human history and don’t have the luxury of time.

“We’re trying to change behaviours and mindsets. It’s an everyday battle to challenge the comfort of the status quo.”