Comcast has noted benefits in children being exposed to screen time, but research suggests young kids spend twice as long looking at screens as they do playing outside 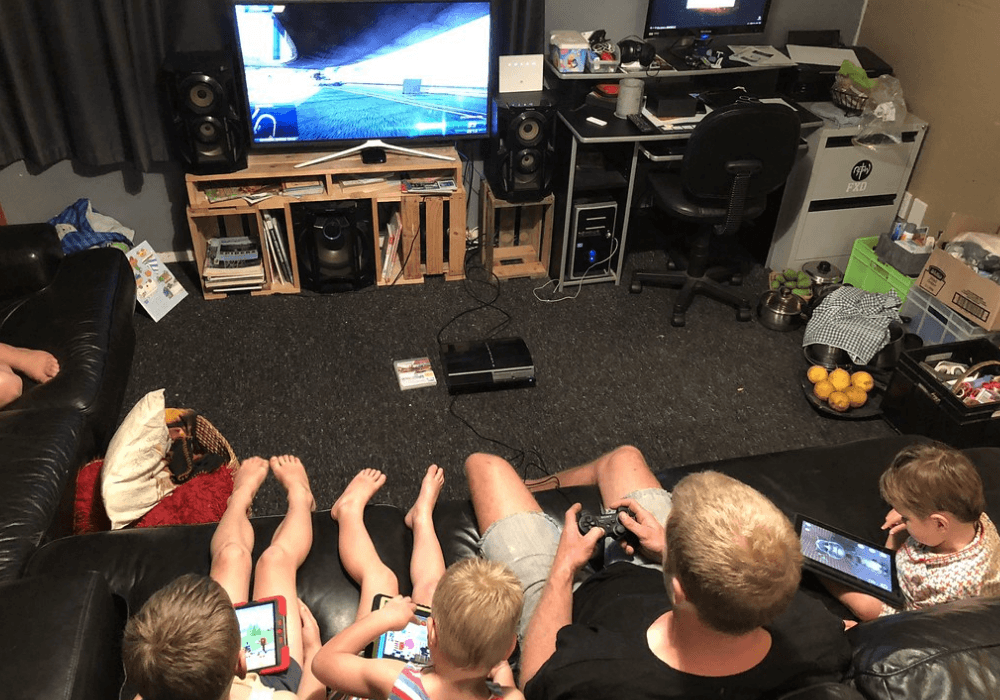 Plenty of research suggests screen time is harming children’s development – but an internet company boss has told parents it could actually be beneficial for their kids.

Extended screen time has been linked as a contributor to childhood obesity, as well as impacting on sleeping patterns.

But research conducted by broadband provider Comcast, which has the largest number of subscribers in the US, suggests that there are positives to take from children being exposed to smartphone, computer and television screens – and that it can actually improve their cognitive and communication skills.

Speaking at the Broadband World Forum in Amsterdam, Comcast’s vice-president of wholesale and development for its Xfinity services, Michael Soileua, said: “What I would encourage parents to do is, instead of thinking about the time children are spending, think about what it is they’re doing with the screen.”

Why screen time has increased

Screen time was introduced as a metric by Apple last year to give users a chance to monitor their usage and take back control, following growing concerns surrounding increased device usage and smartphone addiction.

Over the past decade, the rising popularity in digital devices has caused a dramatic shift in the way children think about technology and the way these use it.

For example, in 2011, half the videos children watched were on a TV screen, while mobile made up less than 10%, according to Soileua.

Fast-forward to 2018 and those figures changed dramatically, with mobile growing to more than 30% — with TV accounting for only a slightly higher proportion.

Studies conducted by the US think-tank Pew Research Center in 2018 found 70% of parents believe their children spend too much time looking at screens, while 57% admitted to using parental controls for phone use – up from 16% in 2015.

A 2018 study by the American Heart Association (AHA) has unveiled some pretty damning statistics for the amount of time children are exposed to screens.

It states that youths between the ages of eight to 18 spend an average of more than seven hours a day looking at digital devices.

AHA recommends parents limit kids to a maximum of just two hours daily, and for children age two to five, it recommended a limit of one hour per day.

Although it is too early to assess the long-term effects of screen time on people’s health, there has been evidence associating it with obesity, according to a study by the American Academy of Paediatrics (AAP).

More time spent in front of screens then leads to less time playing outside and being active.

German laundry detergent manufacturer Persil has been campaigning for children to be more active and conducted research that focused on screen time.

One thousand British and Irish parents of children aged up to seven took part in the study, which found three-quarters have used a screen to entertain kids so they can get on with other tasks.

The research suggests young children spend twice as long looking at screens as they do playing outside.

Blue light is another concern connected to increased levels of screen time, with some studies suggesting that it can have an adverse effect on children’s sleeping patterns.

This is a high-energy visible light emitted from screens such as TVs, computers, smartphones and tablets.

In an article providing screen time advice for parents, the Association of Optometrists (AOP), highlighted the impact blue light may have on kids’ sleeping patterns.

“Using screens close to bedtime may contribute to poorer sleep, which may mean your child’s concentration levels are lower during the day,” the AOP claims.

“This may be because blue light is linked to the suppression of the hormone melatonin which makes us feel sleepy.”

Comcast’s research on why screen time is positive for kids

Given the increased media attention on the effects of screen time, it has caused parents across the globe to pose the question: What is the appropriate amount of screen time for their child?

Comcast conducted its research on screen time to understand the life cycle of its current and future customer base.

It can then track any emerging patterns and tailor its services accordingly.

In July, Comcast announced an enhanced Wi-Fi parental control feature that automatically pauses network connectivity to all devices used by children once their daily time limit is reached.

But recent research conducted by the company found that 74% of parents believe their children benefit from screen time – a huge shift from the previous stats on parental control.

Soileua said: “There’s been a shift in the rise of digital parenting. Parents are now saying ‘wait a minute – why don’t we think about the benefits of screen time?’ because there has now been a transformation.”

He believes parents are now treating internet access as a reward for good behaviour or achievements.

“Turn it on its head and, instead of saying ‘I’m going to gate you as a child,’ say ‘I’m going to reward you for the things that you may have done with incremental screen time’.”

Soileua claims that academic research is showing educational TV programmes can lead to a positive impact on vocabulary and increase cognitive skills by interacting with the right forms of digital media.

He said that research conducted by Comcast and other sources has shown positives of screen time for children’s ability to work in teams and improve their communication skills.

The company’s survey also found that 39% of children reported closer bonding with siblings.

Soileua said: “Because kids today are gaming on Fortnite with 40 other kids, they might have their whole household sitting with them while they’re playing it.

“Not only did we survey it, but we also found demonstrative results because of it.”

“If you think about educational opportunities, this breaks down the barriers between buildings,” he said.

“If you’re not able to travel 50 miles to the university, this enables a new educational experience.

“If you’re not able to go to the best charter school, or whichever the best one is in your neighbourhood, this breaks that down and alleviates that pressure.”

Soileau believes there can be a correlation between increased time spent playing video games and improving children’s learning.

He said: “When you combine the opportunity to have teamwork, socialisation and collaboration through gaming and other educational content, then really, does it matter if you’re in a classroom with 50 other kids?

“It almost takes home-schooling to a whole new different opportunity. It’s about removing the guard rails and instituting opportunities to reward.

“It’s about ubiquity in the home experience and enabling that out of the home – it’s taking education to wherever you as a family go.

With the rollout of the 5G network and the latest advancements in technology, Soileau noted which opportunities he believes a “smart education” could provide.

He added: “Think about the opportunity to engage AR and VR in an educational space – what does that do to the educational experience?

“I think the most important piece is that there are no walls and technology is an enabler for the good.

“It’s about removing barriers between opportunities.”