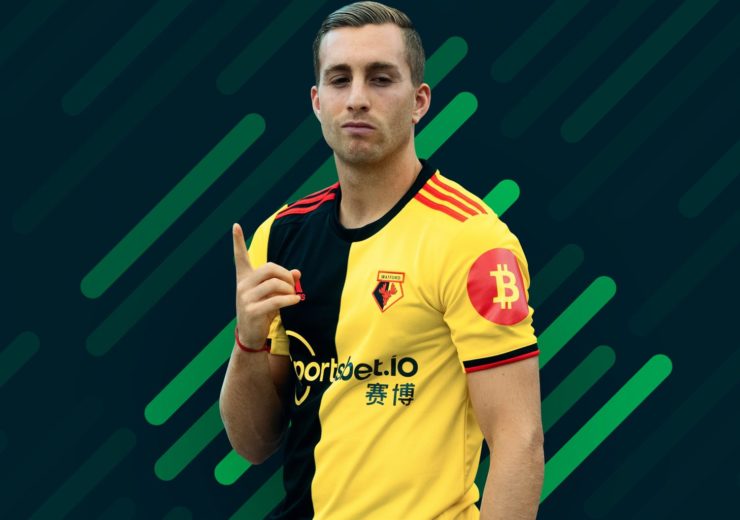 Fans of Premier League football club Watford will be able to bid in Bitcoin for match-day privileges and items from the club shop following a sponsorship deal with the cryptocurrency.

The Bitcoin logo will be worn on the top-flight club’s shirt sleeves — starting from Sunday’s match with Arsenal.

Watford say the change to Bitcoin branding on its kit is part of an “educational drive” led by cryptocurrency betting platform Sportsbet.io.

The online bookmakers became the club’s biggest-ever sponsorship partners, after a $24m deal was struck in June this year.

Watford CEO Scott Duxbury said: “Placing the Bitcoin logo on a Premier League shirt is something that challenges the accepted norm.

“We’re excited about the partnerships and the potential for new global conversations that it could help start for our club.”

The Hornets will be crowd-funding the new Bitcoin sponsorship deal, and anyone who has the cryptocurrency — currently trading at one Bitcoin to $10,323 — will be able to bid for exclusive perks.

These benefits, which are typically reserved for sponsors, include use of an eight-person box to watch live games at the Vicarage Road stadium, space on LED advertising boards during matches and exclusive Watford F.C merchandise.

Justin Le Brocque, head of marketing at Sportsbet.io, said: “Some of the biggest challenges we and others like us face is raising awareness, dispelling common myths around cryptos and educating the public on the advantages and opportunities presented by cryptocurrencies.

“Our partnership with Watford marks a major disruption in the world of traditional sports sponsorship, and by adding the Bitcoin logo we hope this world’s first partnership will create even more buzz around cryptocurrencies.”

Other cryptocurrency partnerships in the Premier League

Wolverhampton Wanderers is another top-flight club with a cryptocurrency-based sponsorship deal.

Cryptocurrency trading platform Coinbase has been the sleeve sponsor for Wolves since 2018.

Similarly, eToro — an investment platform that specialises in cryptocurrency — partnered with seven Premier League Clubs in 2018.

Tottenham Hotspur, Leicester City, Newcastle United, Southampton, Cardiff City, Brighton and Crystal Palace all received payment for the deal in Bitcoin, in what was a first-of-its-kind arrangement.

UK managing director of eToro Iqbal Gandham said that the use of Bitcoin for player transfers would help to add “transparency” to the football transfer market.