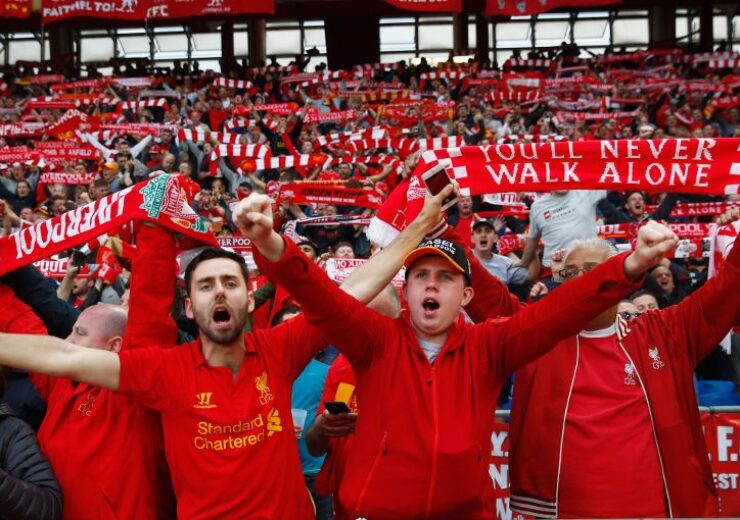 With crowds currently not allowed inside football stadiums on matchdays, even more Liverpool fans could be set to benefit from Intel Sports' True View technology online (Credit: Liverpool FC)

Intel Sports is looking to “create magic” for supporters of Liverpool FC through a partnership with the English Premier League club.

Thanks to Intel’s True View technology, Liverpool fans will be provided with a unique viewing experience that goes above and beyond ordinary live broadcasts, allowing them to view their team’s matches from any angle, position or perspective imaginable on the pitch.

James Carwana, vice president and general manager of Intel Sports, said the US tech firm has a strong relationship with Fenway Sports Group, the Boston-based conglomerate that owns Liverpool FC, and this is one of the main factors that has brought the two together to give fans these experiences, which aren’t attainable using traditional cameras.

“If we look at a match, and the live product that is brought to fans, that fundamentally hasn’t changed for decades at this point,” Carwana added.

“But, in that time, fan behaviours have shifted — especially over the last couple of years.”

“What we’re seeing is fans are looking to interact, engage, and share their personal experiences, and this is what we’re trying to bring to them with True View.”

What is Intel Sports’ True View?

To create the standard viewing experience most fans have come to expect when watching a football match at home, broadcasters will place TV cameras around the pitch, and then switch between those cameras strategically to follow events on the field.

Similarly, Intel puts dozens of 5K cameras around the circumference of a football pitch to create its True View system.

However, the images these cameras capture are then uploaded to the cloud, where Intel’s technology and algorithms are deployed to build up a complete three-dimensional, 360-degree image of the game while it’s being played.

This image – which is also known as ‘volumetric video’ — re-creates what is happening in the match in such an extensive and comprehensive way that a virtual camera can then be placed at any conceivable spot on the pitch.

At this point, the live footage provided to fans at home becomes equivalent to the CGI (computer-generated imagery) used in video games such as FIFA and Pro Evolution Soccer, allowing the viewer to move the virtual camera, and therefore their own point of view, at will.

These capabilities are there for fans to use both during the game, in real-time, and while watching the post-match highlights and analysis afterwards.

Providing this experience for fans is by no means a simple exercise, as the 5K cameras Intel use produce about 67 gigabits of data per second, all of which needs to be uploaded to the cloud and rendered to create this 3D capture of the game.

Carwana believes, however, that Intel’s wealth of tech experience and expertise means the company is well-equipped to do this effectively.

“It’s fundamentally a massive computing problem, and while Liverpool knows the fans better than we’ll ever know them, we’d like to think we know computing better than Liverpool,” he added.

“So, we’ve both got unique sets of capabilities, and by putting that knowledge together, we can create magic.”

A unique experience for Liverpool fans

Liverpool Football Club is one of the biggest sporting brands in the world right now – a position that will only be strengthened by its men’s team winning the UEFA Champions League and a first-ever Premier League title in the past 18 months.

Having increased its following by more than 21.3 million fans in 2019, and with nearly three times as many video views as any other English Premier League club on its social channels, things are looking positive for Liverpool off the field as well.

In a statement on its partnership with Intel Sports, Liverpool’s managing director and chief commercial officer Billy Hogan — who is set to take over from UK businessman Peter Moore as the club’s CEO at the end of August — said: “We strive to utilise the latest technology to be at the forefront of the experience our supporters have, whether that’s on-screen or in-stadium, and with the help of our partner Intel Sports, that is certainly set to continue.”

Through this partnership, 38 cameras have been placed at intervals around the pitch at Liverpool’s Anfield stadium.

True View, and the 3D capture it creates, will enable fans to switch between a near-endless choice of customised camera angles — from the perspective of an individual player, to following the ball, or the referee, or even to a third-person, video game-esque view from over a player’s shoulder.

The many millions of Liverpool supporters around the world who follow their team online will have access to these unique viewing experiences via the club’s own social channels and media offerings, including LFCTV.

And, whereas a more traditional football broadcaster will cater to what Carwana describes as the “lowest common denominator”, by providing what the vast majority of fans want, True View allows Intel, and Liverpool, to create content for very specific niches in the club’s audience.

“When you’re not held by physical cameras, the bounds are endless,” said Carwana.

“It’s simply a matter of spinning out more computing in the cloud to serve whatever perspectives a fan chooses to view the game from.

“It’s not all of them — there’s a small percentage of Liverpool fans that would actually do this — but those that want to can create their own perspectives, and share those perspectives, and even create a little bit of a community around that.”

Despite being a relatively new kid on the block, having been introduced as a business unit of American tech giant Intel about three years ago, Intel Sports has wasted no time building up partnerships with some of the biggest names across the sporting world.

Alongside Liverpool, it also supplies its True View technology to two other English Premier League clubs – Arsenal and Manchester City – as well as multiple sides playing in the highest tier of Spanish football, La Liga.

And it’s not just football fans that have benefitted from this technology, as True View is also up-and-running at eight different basketball teams in the NBA, 19 American football sides in the NFL, and a host of baseball fields that are home to MLB teams in the US.

On top of these partnerships, Intel Sports recently published a case study showing that, with True View, its content completion rate — a metric used to assess how frequently people view video content in its entirety — stands at 90%, which Carwana said is two-and-a-half times the average rate across the industry.

“People are voting with their eyes and with their time, as they’re seeing something that they fundamentally haven’t seen before,” he added.

“But, in terms of the power of volumetric video, we’re at the tip of the iceberg, and this is only going to evolve from here.

“If you look at a match today, someone doesn’t just sit on a couch and have their eyes glued to a television for three hours straight — that’s not the reality.

“You’re engaged on multiple devices and platforms at the same time to complement the live presentation of the game, and I absolutely do see True View as having the capability to enhance that experience.”