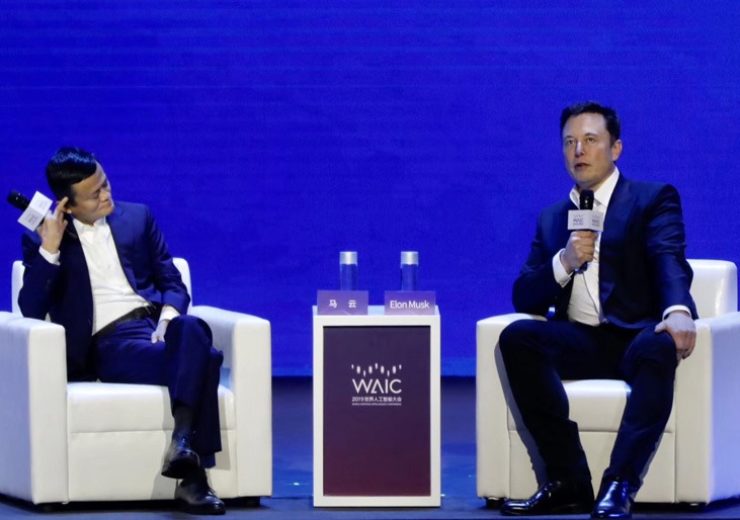 The two visionary entrepreneurs shared their different ideas about the future of technology in front of an audience in Shanghai (Credit: YouTube)

Jack Ma and Elon Musk painted very different pictures of the future when the two technology leaders met at the World Artificial Intelligence Conference in Shanghai.

While Ma, the founder of Chinese tech giant Alibaba, remained optimistic about the potential of AI, Tesla founder Musk claimed it could spell the end for humanity.

Ma said: “AI is going to open a new chapter in global society and will help us to understand ourselves better.

“I’m quite optimistic and don’t see artificial intelligence as a threat to human beings.”

The Chinese entrepreneur remained confident that people who were “street smart” will be able to embrace the changes that AI brings and was confident that humans can not invent something that can outsmart them.

But Musk said:”I would very much disagree with that, we are very dumb and can definitely make things smarter than ourselves.

“Computers are already much smarter than people, we just keep changing the goalposts.

“We used to think being good at chess was a sign of intelligence and then [chess champion] Garry Kasparov was crushed by Deep Blue [a chess computer] in 1997.

“There’s a smaller and smaller number of pursuits which humans are better than machines at and every year the number gets smaller. Soon, we will be far surpassed in every way.”

One of the solutions to avoiding Musk’s vision of an AI apocalypse comes from one of his own company’s.

Musk described Neuralink – which is attempting to create an AI that can be implanted in the human brain – as an attempt to “go along with the AI ride” and, according to Musk, comes from the notion that “if you can’t beat them, join them”.

The Tesla founder also sees the future of humanity as interplanetary and described the ability to live on different planets as one of the ways to “elevate the human consciousness and better understand the universe”.

Musk’s aerospace company SpaceX has the ambitious goal of sending people to Mars and has facilitated several successful tests of super-size rockets, including this week’s launch of the Starhopper rocket.

However, this was another point of contention between the two tech luminaries.

Ma said: “I admire your courage for trying to explore Mars, but I also admire efforts to improve the Earth.

“It’s great to send people to Mars, but we must still care about the 7.4 billion people on Earth.

“We need more heroes on Earth working hard to improve the planet every day and finding out how can we make the world more sustainable.”

Musk, who founded Tesla on the idea of creating a more sustainable transport system and finding more efficient ways to produce and store solar energy, clarified that he was “very pro-Earth”.

“I think less than 1% of the Earth’s resources should be put into multi-planetary exploration,” he added.

Jack Ma and Elon Musk on the future of work

One of the most immediate concerns regarding AI is that it will drive efficiencies which will take away people’s jobs.

AI is already being used in a variety of traditional jobs such as HR, retail and journalism.

The UK’s Centre for Social Justice estimates that 2.25 million jobs are likely to be replaced by computer automation.

Ma attempted to reassure people on this front and claimed that “AI will give people more time to enjoy being human beings”.

He added: “During every technological revolution, people worry about losing jobs, but in reality it creates a lot of jobs too.

“We should be asking why we need a lot of jobs – I think people should work three days a week and four hours a day.

“People should not have to worry about jobs, the focus should be on making people happier and letting them experience life.”

The Alibaba CEO believes that the change in employment will require every government to reform their education system so they focus more on creative skills, such as painting, singing and dancing.

But once again, Musk had a more immediate solution, adding: “With Neuralink, people can upload a skill and learn it instantly, like the Matrix.”