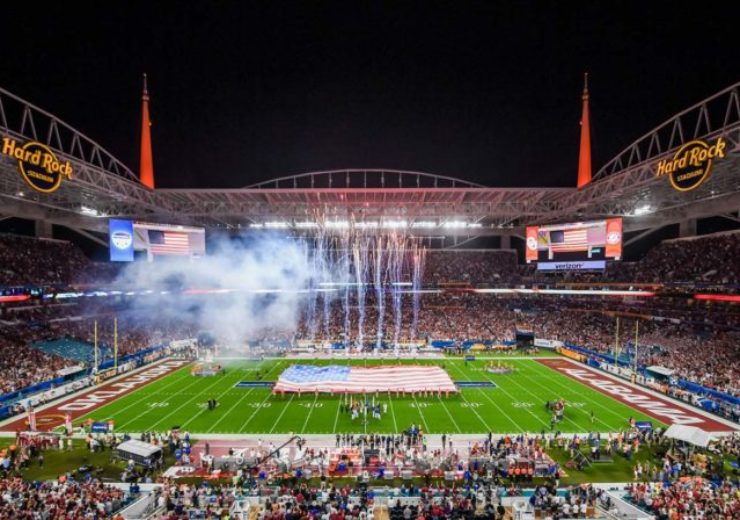 Watched by 100 million people, the Super Bowl is the ultimate platform for brands to push their names out as sponsors – with the 2020 occasion expected to be no different.

The 54th instalment of the NFL showpiece event pits Kansas City Chiefs against the San Francisco 49ers at the Hard Rock Stadium, in Miami, on Sunday (2 February).

Filling up advertising space on the pitchside, scoreboard, TV commercials and even the ball will be some of the world’s biggest brands, which have spent more than an estimated $1bn on sponsorship during the 2019-20 season.

But the Super Bowl also provides a one-off promotional opportunity for some brands that don’t have quite the same marketing budgets as those companies.

This year, there are five companies that have signed deals worth a combined $16.5m with the Miami Super Bowl Host Committee – rather than the league – to make their NFL debut on the biggest stage of all.

Here we take a look at the annual showpiece fixture’s sponsorship deals and profile the brands behind these one-off sponsorships.

Sportcal head of sponsorship Conrad Wiacek believes the profile of brands that want to associate with the NFL and Super Bowl show American football remains in “rude health”.

He says: “While dogged by a series of scandals in recent years, the audience’s appetite for the sport is undiminished and even a low-scoring Super Bowl like last year still produced an audience of 100 million viewers.

“The size of this audience is the key reason behind brand interest in the showpiece, giving them access to the biggest sporting audience for a one-off event.

“While partnerships with ‘traditional’ sponsors like Pepsi and AB InBev dominate the list, signs of innovation can be found – perhaps best highlighted by the deal with Amazon Web Services, a partnership focused on the health and wellbeing of players.

“The new reality in American sports is also evident, with gambling sponsors like Caesars Entertainment and Gateway Casinos taking their place on the roster of sponsors.”

With a goal to eliminate 10 million tonnes of plastic from entering the world’s food and oceans using innovation, Footprint has been given the ideal platform to further its message as the Super Bowl’s sustainability partner.

The Arizona-based company designs and manufactures sustainable materials that it believes can be workable alternatives to plastics.

Beginning with making high-quality paper straws that are now supplied to Whole Foods, it has gone on to create yoghurt cups, microwaveable meal bowls, disposable utensils, meat trays and rings for cans.

Footprint hopes its products – which are compostable, biodegradable, recyclable and free of harmful chemicals – will make it easy for companies to stop using single-use plastic.

As part of its role as Super Bowl sustainability partner, it will feature plastic-free foodware products in the “environmental village” of a week-long fan festival in Miami’s Bayfront Park leading up to the game.

Despite having a history that stretches back to 1872, Truist Financial Corporation is a new name on the banking block.

That’s because it was known as BB&T – standing for Branch Banking and Trust Company, a name dating back to the start of the 20th century – until December 2019, when it was rebranded after merging with SunTrust Banks.

Truist, headquartered in Charlotte, North Carolina, is the sixth largest US bank, serving about 10 million households while being responsible for $301bn in loans and $324bn in deposits.

Throughout its 148-year history, the bank has made 106 mergers and acquisitions.

Ahead of the Super Bowl, Truist will hold the annual Celebrity Super Slam charity basketball game on Friday (31 January), featuring celebrities and athletes, and the Celebrity Flag Football game the following day for current and former professional football players.

The Super Bowl is an occasion to celebrate but should there be any unsavoury incidents in the stands, fans will be able to log them via the SaferWatch app.

It aims to enhance security in schools, corporations, public venues, neighbourhoods and communities.

Users can report an incident as they see it unfold or submit a tip at a later time. The app also provides real-time, two-way communication during both emergency and non-emergency situations.

As well as public consumption, about 10,000 staff and volunteers at the Hard Rock Stadium will use SaferWatch at the Super Bowl to monitor the crowd and events outside the ground.

Healthy gourmet food service DeliverLean is one of a new class of food start-ups that aims to make eating well convenient rather than painful.

The South Florida-based company says it sources, cooks, prepares, packages and delivers hundreds of thousands of fresh and healthy meals, juices and snacks every month.

There are more than 150 different items to choose from, with each meal said to range between 300 and 500 calories.

It was founded by serial entrepreneur Scott Harris, who came up with the idea after noticing employees in another of his company’s would be more productive after eating a healthy meal at work.

He was a finalist for the EY Entrepreneur of the Year Award in 2015, while that same year the start-up ranked 124th in the Inc. 500 list of America’s fastest-growing companies.

Founded in 1992 when several regional ambulance providers consolidated into a single company, American Medical Response has grown to become the largest ambulance service provider in the US and launch global operations.

It employs 38,000 people and has a fleet of more than 6,000 ambulances, alongside air ambulances and other medical transportation vehicles.

AMR’s growth was led by a number of mergers and acquisitions, but in March 2018 it was sold to global investment firm KKR for $2.4bn and became part of Global Medical Response, the world’s largest medical transportation company.