Inside the Atlanta Falcons’ new stadium: The high-tech home of the Super Bowl 2019

Atlanta is known as the birthplace of the civil rights movement, home of Coca-Cola and now also the location of the futuristic Mercedes-Benz Stadium - which hosts the 2019 Super Bowl 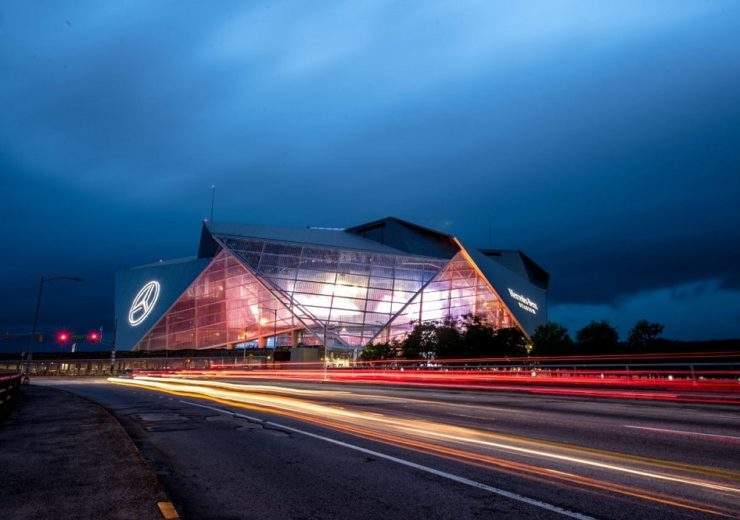 The Atlanta Falcons’ new stadium bares more resemblance to a robot from Michael Bay’s Transformers movies than the hollowed out cauldron of Barcelona’s Camp Nou.

The 75,000-seater Mercedes-Benz Stadium, which the NFL franchise claims to be the most technologically advanced in the world, is set to receive international attention as the backdrop for the 2019 Super Bowl.

How much did Atlanta Falcons’ new stadium cost?

The retractable roof, which could be described as the crowning achievement of the stadium, was installed in July 2018 and features eight panels arranged in a circular formation that rotate to open and close.

The ambition of the US architectural firm HOK was to create a stadium for Atlanta that offered an “unparalleled fan experience” and to take it to an “unmatched level”.

As well as being the home of NFL team Atlanta Falcons, Atlanta United FC – the MLS outfit founded in 2014 – play home games there too with both teams are owned by The Home Depot founder Arthur Blank.

There’s also a good chance the ground will be used in the 2026 FIFA World Cup, which is to be jointly hosted by the USA, Canada and Mexico.

Speaking when the stadium opened, Steve Canon, CEO of AMB Group, parent company of the Atlanta sports teams and the facility, said: “This is a stadium that is built from the fan up and ever since we’ve been obsessing about how we can create and curate the best fan experience in the world.

“Our aspiration is to be the [luxury hotel chain] Ritz-Carlton of fan experience.

“We want to create a connection, and a level of hospitality and care for our fans while they’re in our building that you don’t normally expect from a stadium.”

The design for the building took inspiration from the Pantheon in Rome and the ambition was for it to last the 2,000 years that the Roman temple has.

Atlanta Falcons CEO Rich McKay said: “Our goals were high for the stadium.

“Architecturally, it was to design a stadium that would stand the test of time in its uniqueness and iconic nature.

“The simple object was to make sure that anyone who landed at the airport wanted to go and see the stadium.

“We were not interested in people who had built former stadiums – in our mind, stadiums had improved incrementally by 2% to 3%, and we thought it was time to make a big jump.”

One of the signature features of the building’s architecture is the retractable roof, which open and close in synchronised rotation – like a camera shutter.

The sliding panels are able to open and close within seven to ten minutes and cost $8m (£6.1m) to produce.

Although they weren’t functional for the first season the stadium was in use, the roof aperture remains an incredible feat of engineering, weighing 22,000 tonnes and covering an area of 14.5 acres.

Scott Jenkins, general manager of the Mercedes-Benz Stadium, said: “The thing that attracted me to begin with was the ambition to build something architecturally that is way above anything that anyone has done previously.

“If you look at the building, it’s stunning.”

Another stand-out architectural feature is the so-called “window to the city”, which give fans a view over Atlanta – both from inside the stadium and when using the skybridges that connect different areas of the stadium.

Mr Jenkins said: “We are truly in the heart of the city and our window to the city gives you a great view of the skyline so you definitely know where you’re at.”

Attention to detail and fan experience were at the forefront of his mind during the design phase of the project.

When designing the thoroughfares, engineers from the Disney World resort in Florida were brought on board to maximise the space and make sure they delivered on their goal of getting guests into the Atlanta stadium within five minutes.

The most technologically advanced stadium in the world

Atlanta Falcons’ new stadium houses more than 2,400 screens, including in the toilets, to make sure that fans never miss any of the on-field action – but one screen in particular stands out.

Circling the perimeter of the roof is an 1,100 ft long screen, dubbed the Halo and described by Mr Canon as one of the biggest “wows” in the venue.

Standing alongside the entrance tunnel is a 100ft-tall LED column, which projects NFL players onto the four screens during announcements – meaning Atlanta Falcons fans are regularly greeted by a giant Julio Jones, the team’s star wide receiver.

As a result, the Mercedes-Benz Stadium has more LED capacity than any other stadium in the world.

The man controlling the screens is Pete Soto, senior director for live events.

He said: “It’s a very unique, complex and challenging environment but it’s also the most entertaining and coolest environment in the business.”

There is no fixed signage in the Atlanta stadium, with images on digital billboards instead being fed by 4,000 miles of fibre cable.

Mr Soto added: “The flexibility that we have digitally means that we can go from a football event, to a soccer event or concert.

“We can make any event feel like it’s their home building.

“There’s no permanent signage so we can change it to match their look, feel and colours so a high school team can come here and feel like they’re in the Super Bowl themselves.”

Despite the massive number of screens and the sheer size of the stadium, the Mercedes-Benz Stadium remains environmentally-friendly.

It has been certified platinum in terms of Leadership Energy and Environmental Design (LEED), a globally-recognised green building rating, and is the first professional stadium to reach that certification level in the US.

Mr Jenkins said: “To get to LEED platinum, we had to be aggressive on every front. It’s a very energy-efficient building that uses about 29% less energy [than a typical stadium].

“We have 4,000 solar panels, which are enough to provide power to nine Falcons games or 13 Atlanta United matches.

“We use about 47% less water and we have edible gardens on the outside of the building, and bioswales that are built in as part of our storm water management system.

“We actually collect the rain water that falls on the site and store it in a cistern, and reuse it for our cooling tower and to irrigate our landscaping.”

The cistern holds 680,000 gallons and helps to mitigate the risk of flooding in neighbourhoods to the west of the stadium.

Being located near two public train stations helps to reduce the number of people travelling to concerts and matches by car.