NFL team owners: The billionaires at the helm of the top 2019-20 franchises 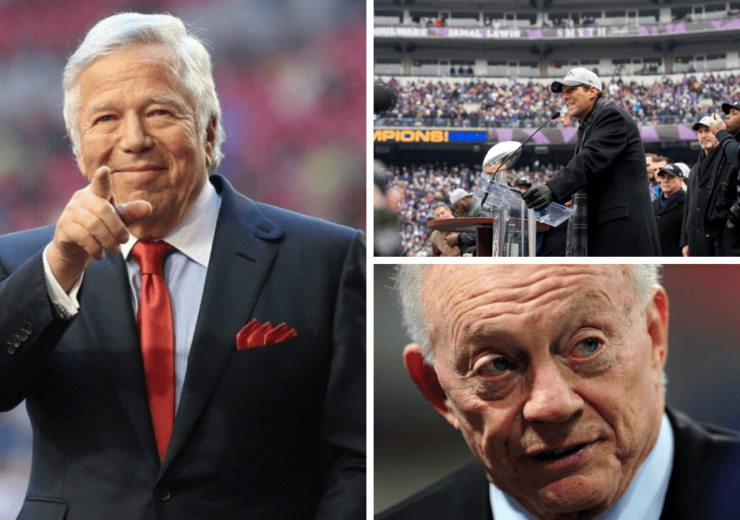 American football fans won’t be the only ones cheering on their favourite players as the 2019-20 season get underway – with a host of billionaire NFL team owners also gearing up for five months of nail-biting action and lucrative brand exposure.

The business moguls behind the franchises set to square off have an entrepreneurial story to tell, with many of them having launched their careers from inauspicious beginnings.

Balitmore Ravens supremo Steve Bisciotti, for example, formed a staffing company in his basement that later became the largest in the US – Allegis Group – while Philadelphia Eagles chief Jeffrey Lurie earned a fortune running his family’s cinema.

Here we profile 12 NFL team owners who will be hoping for a repeat of their success in reaching the 2019 play-offs.

Starting his career as a car salesman in New Orleans, Tom Benson went on to open several dealerships in the city before entering the banking industry.

He sold his company Benson Financial to Norwest Corporation for $440m in 1996, which was later bought by Wells Fargo.

His wife Gayle, 72, inherited his business empire and now owns the NFL team, worth an estimated $2.3bn according to Forbes.

Doubts remain over the future ownership of the Seattle Seahawks following the death of its former owner Paul Allen in October 2018.

Alongside Bill Gates, Allen co-founded Microsoft in 1975 and early last year was estimated to be the 44th wealthiest person in the world with a fortune of more than $20bn.

He resigned from his position on the board of directors of the software giant in late 2000, but stayed on as a senior strategy advisor. In January 2014, he still held 100 million shares in the company.

In addition to his business ventures, Allen was a dedicated philanthropist and donated more than $2bn to causes in the education, wildlife and environmental conservation and healthcare fields.

Allen, who was diagnosed with Hodgkin’s lymphoma and non-Hodgkin lymphoma earlier in his life, died after a septic shock, aged 65.

The ownership was transferred to the Paul G Allen Trust, which is controlled by his sister Judy.

Many observers expected the team to be put up for sale but it remains in the family’s hands, with general manager John Schneider confirming in February 2019 that Judy Allen was now the person at the head of the franchise.

Los Angeles Rams owner Stan Kroenke is one of the richest NFL team owners with an estimated wealth of $9.7bn, which he earned primarily as a real estate developer.

He had plenty of success and reaped a lot of profit from developing Walmart stores in the US – which may or may not be related to the fact he was married to Ann Walton, an heiress of the retail conglomerate.

He is also the sole owner of English Premier League football club Arsenal after buying out the club’s other major shareholder Alisher Usmanov in September 2018.

Kroenke first bought a stake in the LA Rams in 1995, before purchasing the team outright in 2010.

After returning the franchise from St Louis to LA in 2015, its worth now estimated by Forbes to be about $3.8bn – almost four-times its $930m valuation in 2014 when the team ranked bottom.

The Rams are due to move into a new stadium – which will feature a plaza sponsored by American Airlines to the tune of $90m – in 2020, while on the field the team’s fortunes have upturned as they reached the Super Bowl in 2019.

Having owned the Dallas Cowboys since 1989, Jerral Wayne Jones has amassed a wealth topping $8.8bn as of September 2019, according to Forbes.

The 76-year-old purchased the NFL franchise 30 years ago from its previous owner Harvey Roberts “Bum” Bright for $140m.

After a humbling first season in which his team registered just one win and suffered 15 losses, Mr Jones went on to secure the Dallas Cowboys’ place as one of the best teams of the 1990s.

He has come under fire by the public and NFL officials in the past, having been named the least favourite sports personality of the year in Virginia, Delaware and Texas by Sports Illustrated in 2003.

The criticism he has attracted is said to be due to his insistence of often being the team’s “face” and installing himself as general manager.

Meanwhile, the tycoon was also fined $25,000 by the NFL for publicly criticising referee Ed Hochuli after he made a controversial call in a 2008 fixture that didn’t include Jones’ team.

Born in 1923, Virginia Halas McCaskey is the principal owner of the Chicago Bears, with her children and grandchildren also contributing to an 80% majority share of the team between the family.

The 96-year-old is the eldest child of George Halas, who died in 1983 and left the team to his daughter.

McCaskey, estimated to be worth $1.3bn, became the oldest owner in the NFL in 2014 after the death of former Buffalo Bills chief Ralph Wilson.

Speaking about her philosophy regarding sports team management, she said: “Our Hall of Fame general manager Jim Finks used to say ‘do the right thing.’

“Those are pretty good words for any situation, including running a professional sports team.”

The 68-year-old later founded a Hollywood production studio known as Chestnut Hill Productions, the releases of which you won’t see in many Hall of Fame lists – featuring flops like Angelina Jolie-starring Foxfire and Kathleen Turner’s VI Warshawski.

The Kansas City Chiefs were formed in 1963 and have been owned by the Hunt family ever since.

Clark Hunt took over the team as chairman and CEO following the death of his father Lamar Hunt in 2006.

The 54-year-old ha gathered a $2bn fortune off the back of his career as an analyst at Goldman Sachs and by acting as one of the founding investors in Major League Soccer.

He also sits on the NFL’s international committee and its executive committee.

After climbing his way to the top, he bought the firm before absorbing it into International Forest Products, a business he founded that has gone on to become one of the world’s largest suppliers of paper products.

The company is part of the 78-year-old’s private holding company The Kraft Group, which also controls his sports investments.

They include esports for competitive video gaming and mixed martial arts.

His early business career was spent as a struggling salesman and largely unsuccessful entrepreneur, before he got up-and-running when he founded a power generation company known as Cogen Technologies.

He sold the firm in 1999 and, in the same year, assumed control of the Houston Texans – leading the franchise to two Super Bowl victories in 2004 and 2017.

Today, ownership of the team – worth an estimated $3.1bn – has been passed to his wife Janice McNair and son Cal McNair.

One of the first projects Bisciotti oversaw as owner was to build the team’s training and practice facility, known as The Castle, which opened later that year.

Bisciotti is the co-founder of Allegis Group, an international talent management firm headquartered in Hanover, Maryland, which posted a 2017 revenue of $12.3bn.

Dean Spanos took over the reigns of the Los Angeles Chargers in late 2018 after the death of his father, Alexander Spanos, who bought the franchise for $72m in 1984.

The 69-year-old had already played a key role in day-to-day operations, having been named team president in 1994 and CEO in 2005.

Under Spanos’ leadership, the Chargers won 113 games between 2004 and 2014, before he chose to relocate it in 2017, moving the team from San Diego to their current base in Los Angeles.

Similar to a number of his fellow NFL team owners, the Spanos family has also dabbled in philanthropy, having launched the Chargers Community Foundation to support community non-profits in 1995 and the Chargers Champions to support local schools five years later.

James Irsay inherited the Indianapolis Colts from his father in 1997 after becoming general manager in 1984, aged 24.

His early life was spent working in everything from ticket sales to public relations for the franchise, and as a child he would travel with the team on the bus that took them from match to match.

Since he became a majority owner, the Indianapolis Colts have enjoyed a rise in fortune, registering 16 play-off appearances and a Super Bowl win in 2006.

Irsay, 60, has displayed a strong passion for arts and culture in the past, purchasing the original manuscript of the novel On the Road – a 120ft scroll of tracing paper sheets cut down and taped together, for $2.43m in 2001.

Forbes estimates him to have a $3bn net worth.