As the pro-democracy protests in Hong Kong start their 12th week, the muted response from the region's biggest banks could prompt a reaction from customers 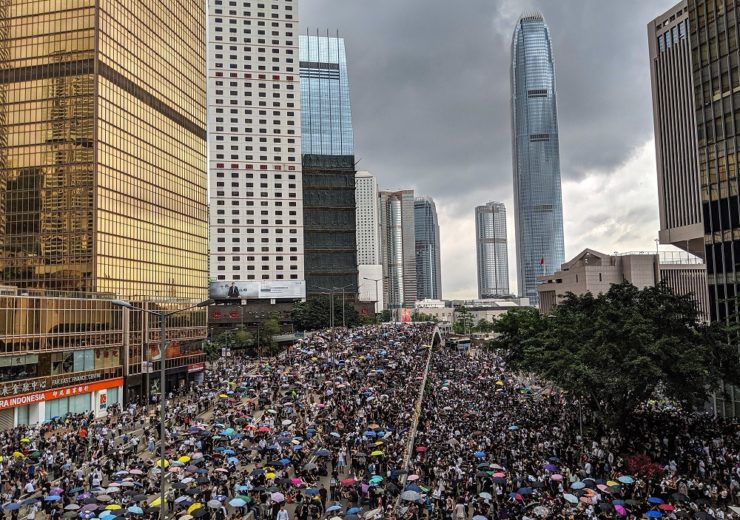 An estimated 1.7 million took to the streets in Hong Kong to protest Chinese influence in the region (Credit: Studio Incendo)

Banks in Hong Kong should be wary of “consumer desertion” following their “bland responses” to the Hong Kong’s pro-democracy protests, according to a warning from one analyst.

Three of Hong Kong’s biggest banks took out advertisements in Chinese-language papers condemning violence and calling for a peaceful conclusion to protests in Hong Kong.

HSBC, Standard Chartered and Bank of East Asia, all broke their silence over the protests, which began on 9 June, by jointly calling for an end to the violence.

However, banking analyst at GlobalData Katherine Long, believes the three major banks — which have a 45% market share — could risk losing their dominance because of what is seen as their political position.

She said: “It is not surprising that Hong Kong customers perceived the banks’ responses as them siding with the Beijing government.

“Banks may draw upon bland responses to crises as a way to navigate their way through tense political times.

“But with their efforts backfiring, the three banks in question should be wary of consumer desertion.

“The protesters are intent on causing short-term disruption in pursuit of the freedoms they believe will ensure Hong Kong’s long-term economic prosperity. Banks that get in the way of that goal will inevitably face their wrath.”

“These three major banks are now at risk of losing irate customers to the new challengers.”

The new services are expected to launch in the final quarter of 2019 and represent the biggest disruption to the highly-profitable banking sector in the region.

A quarter of HSBC’s global pre-tax profits for the first half of this year came from its Hong Kong retail and wealth management services, which made the bank $3.4bn.

Similarly, a quarter of Standard Chartered’s income came from its Hong Kong operations over the same period.

What did HSBC, Standard Chartered and Bank of East Asia say?

It said: “Social stability and the quality of remaining calm in the face of all sorts of challenges are the cornerstones of Hong Kong’s success.

“Maintaining the rule of law is essential to the international financial centre status that is unique to Hong Kong. Therefore, we are in full support of using peaceful methods to solve problems.”

It said: “We resolutely support ‘one country, two systems’, and support the special administration government in its effective maintenance of social order and security.

“Only in a peaceful and rational environment can we facilitate communications, resolve the divide facing us and open up a beautiful future for this international metropolis.”

The Bank of East Asia, which took advertisements out in three papers, said: “We condemn all forms of violence and hope the city can restore peace and order as soon as possible, so that Hong Kong can focus on dealing with other challenges that we are now facing.”

What are the Hong Kong democracy protests?

The pro-democracy protests were triggered by proposed amendments to Hong Kong’s extradition law, which raised fears it would become easier for Hong Kong citizens to be extradited to mainland China.

Critics worried that the changes would see political opponents put on trial in China and were seen by some as an attempt by Beijing to exert more power over Hong Kong.

The special administration region has enjoyed freedom to determine its own government, legal system, economic system and rights, as part of the “one country, two systems” rule.

But protestors fear that Hong Kong’s independence from China is waning.

Clashes between demonstrators and police have been frequent, while city-wide strikes have brought its airports and rail lines to a standstill.

The strikes prompted seven of Hong Kong’s largest banks to close a combined 230 branches on 5 August.

Some 86 protestors were detained over the weekend as the demonstrations entered the 12th week.

Bank of East Asia continues to stand by its message in the adverts and hopes the city can restore peace and order as soon as possible. HSBC and Standard Chartered declined to add any further comment.