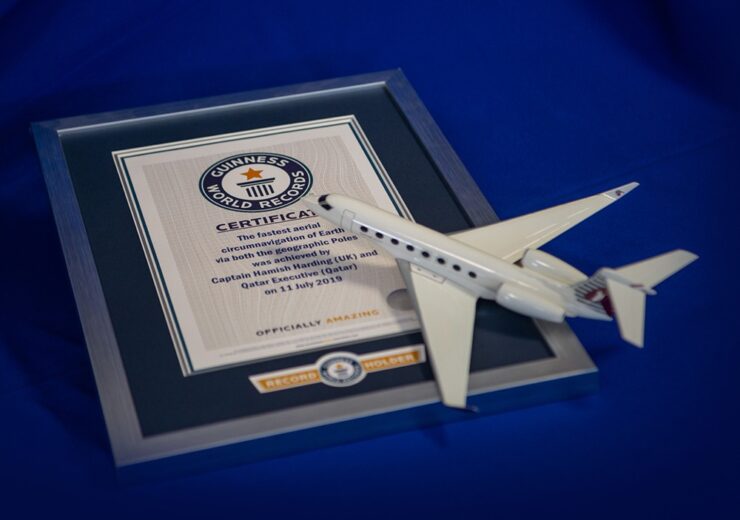 This year, a group of pilots broke the world record for global circumnavigation from pole to pole, completing their round-the-world flight in a Gulfstream G650ER aircraft; the fastest ultra-long-range business jet in the industry. Jack Coleman speaks to Captain Hamish Harding, chairman of Action Aviation, about his high-adrenaline journey and the leadership lessons learned during this ambitious voyage.

In September 1519, a crew of mariners, led by Portuguese captain Ferdinand Magellan, set sail from Spain with five merchant ships. Three years later, after braving hazardous weather, scurvy, choppy waters and the death of Magellan, only one ship, the Victoria, made it back to Spain after circumnavigating the globe. According to historian Laurence Bergreen, it was “the greatest sea voyage ever undertaken, and the most significant”.

500 years later, an international team of eight aviators stood on the warm tarmac at the Kennedy Space Centre in Florida, anticipating the ambitious, perilous task ahead of them. They would endeavour to follow in Magellan’s crew’s footsteps, in a safer way, but at a far, far greater pace. The group were attempting to smash the Guinness world circumnavigation record of less than 54 hours, seven minutes and 12 seconds, by covering a distance of 40,178km, crossing the icy Antarctica wilderness, the vast African plains, the mountainous expanse of Chile, from pole to pole in a high-speed jet.

The team were led by 55-year-old pilot Hamish Harding, the chairman of Action Aviation. He was aided by the experienced hands of Terry Virts, a former NASA astronaut, F16 US airforce flier and International Space Station commander. Named One More Orbit, the mission was launched as a homage to Apollo 11, 50 years after the first man set foot on the moon.

Just 46 hours, 39 minutes and 38 seconds after taking off, flying at an average speed of 535mph, Harding and his team, like Neil Armstrong and his crew, triumphantly returned to the Kennedy Space Centre as heroes and record-breakers. But, despite it taking place over just two days, the flight was the result of many years of hard work and preparation. The team had to optimise routes and fuel stops, plan for adverse weather conditions and make contingency plans for every eventuality.

“We’ve been trying to do this for five years, to put everything together,” explains Harding. “It took a huge amount of logistical support to do it in the end, because to go around the world is one thing, but to do it fast requires tremendous logistical planning.”

Like the crew of Apollo 11, who had just 15 seconds of fuel left when they made their precarious landing on the moon’s surface, Harding’s troupe were conscious of the aircraft’s substantial power requirements. Therefore, special measures and meticulous safeguards were put in place during the high-octane refuelling process.

“We had, for example, two G650 captains who went out to each location around the world, and they were simply there managing the refuels to make sure everything was done perfectly because there could be no delay,” Harding says. “We had to be marshalled into exactly the right spot on the runway, fuel had to be ready to go with the right length of cable from the fuel attachment points and a number of other things, but if you got any of those wrong in the middle of the night, in Chile or elsewhere, it could add at least 10 to 15 minutes to your refuel time.”

Brief, half-hour stops were made in Kazakhstan, Mauritius and Chile with each of the locations competing with one another to be faster than the other. Mauritius was particularly keen to be the quickest refuel station and, as the speed record was such a high-profile event, air traffic control gave Harding’s team total priority. All airliners were held to stop any chance of interfering with the approach and the Gulfstream came straight off the runway into a pre-prepared area, watched by members of the press. The next step was to load up as much fuel as the team could get on board, as quickly and efficiently as possible. Then, once the jet was back in the air, conserving petrol was of paramount importance.

“We did discover that we were using up a lot of oil on at least one of the sectors, so we had to shut down the engines in Chile because we had a tremendously cold patch over Antarctica, much colder than forecast,” he explains. “We actually went to -83°C near the South Pole and that is below the level that a Gulfstream is clear to fly at, so we had to descend from that temperature to about 5,000ft to find the -80°C level that is permitted.”

The team had travelled rapidly over the North Pole to Kazakhstan and onto Mauritius before approaching the ice sheets of Antarctica. While the North Pole experiences 24 hours of daylight in July, the South Pole is shrouded in 24 hours of darkness. But first, in order to get there, it was a 12-hour flight from Mauritius to Chile, even in the high-velocity G650. The risk then was that the team had a small window of time where they probably wouldn’t have made it back if the aircraft had lost an engine or the cabin depressurised.

“If we lost an engine, we did have an emergency one that was on a gravel runway in Antarctica, manned by the Chilean military, who made it available to us, and it was ready to go if we had to use it,” he explains. “It was very unlikely, of course. Engines don’t usually fail on a jet like this, but if we had to rely on only one we wouldn’t have been able to make it to the mainland. So we probably wouldn’t have been able to use the aircraft again if we had landed in Chile, it would have been a write-off. I don’t think we would have got the Gulfstream off the ground again. Ever.”

It’s a story that’s certainly worthy of a good film and production for a documentary is now underway. The project is being directed by Terry Virts, who previously worked on the IMAX movie A Beautiful Planet, and editors are currently sifting through reams of footage. Six camera teams were present onboard the aircraft at all of the refuel, take-off and landing locations, and also in the mission control centre in Doha. There was also a 46-hour feed from the jet that satellite companies Inmarsat and Satcom Direct collaborated on to create the most extensive uplink from any aircraft ever around the world. All of this added up to about 10TB of material at 4K of resolution.

“A good documentary should have lots of conflicts and a bit of tension between the people and maybe a love triangle or something, but actually, we had nothing,” he jokes. “Everybody got on with each other extremely well and cooperated. Was there plenty of arguing on the ground? The cameramen might have been trying to kill each other there but we didn’t see that. We had a great support team in Doha. They were constantly feeding new mission profiles to us, based on the latest weather, ‘climb 1,000ft, increase mark number by .01, do this for another 10 minutes, and then do that’, so we were trying to take every second out of the time.”

In order to alleviate the economic impact of the flight, Harding and his crew worked closely with the carbon underground, which offset all of the CO2 produced in various ways, in order to make the trip ‘carbon negative’. He also hopes to spread the message among colleagues that carbon offsetting is a small cost to pay, in comparison with normal expenses, and something that a lot of jet flyers could manage to do for the sake of the climate.

Flight team reach for the sky

Now that the mission is completed, what other advice would Harding give to leaders, in aviation and beyond, looking to take on a big challenge like this?

“Get a really good team, I was incredibly lucky to have amazing leaders around me – there was Terry, who just attracts good people automatically by being involved, and also Jannicke Mikkelsen. She was this amazing livestream operator that managed the technology and we had a good crew from Qatar Executive who were very experienced. There were four of us who were flying the aircraft, we’d all been flying for decades and we had some top training captains from Qatar Executive on board. So, it was a bunch of great, inspired people working together and, in the end, I almost couldn’t believe that we pulled it off after all this time.”

The successful completion of this voyage was the culmination of many years of extensive flying experience. 33 years prior to the moment when the Gulfstream touched down safely in Florida, Harding had sold his IT company, following an intuitive call to become a business jet pilot. As Jerry Crawford once said, “To most people, the sky is the limit. To those who love aviation, the sky is home.” Harding was just five years old when the moon landings captured the world’s collective imaginations. Now, this aviation aficionado will hope his 40,178km mission can inspire a new generation of blue sky thinkers to smash some limits of their own.