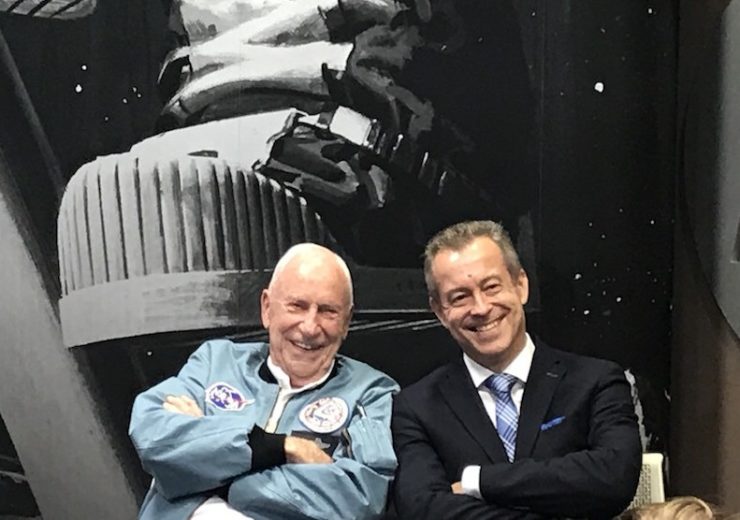 Al Worden is a man who’s a member of several highly exclusive clubs. He is one of 24 people to have flown to the Moon, holds a Guinness World Record for the “most isolated man” during his time alone in the command module, and was the first person to complete a spacewalk in deep-space. The former astronaut spoke to Sam Forsdick at Motorola Solutions’ Krakow Innovation Center about the Apollo 15 mission that has put his name in history books.

While some dream of heading into space, Al Worden had never thought about becoming an astronaut until he stumbled across a job opening at NASA.

“I never looked up to the skies and thought, ‘I want to be an astronaut’,” says the 87-year-old former fighter pilot.

“My whole goal in life was to be the best pilot I could be. NASA had this opening, so I threw my name in there.

“It was kind of a lateral step from flying, but I thought it was a great opportunity.”

Worden was one of 19 pilots selected by NASA from over 800 applicants.

After serving in the support crew on Apollo 9 and back-up command module pilot for Apollo 12, his time came in 1971, when he was selected to pilot Endeavour — the command module for the Apollo 15 mission.

A new series of spacecraft for the Apollo 15 mission

Having already put a man on the Moon, NASA had a new remit for the Apollo 15 mission. Worden and fellow crew-members, David R. Scott and James B. Irwin, were to focus on scientific research.

He explains: “We were was past the point of just being able to fly to the Moon and come back — we had done that a number of times.

“So we focused on the science and we were considered the most scientific crew in the Apollo programme.”

The 3,000 tonne Saturn V rocket was designed to carry a heavier payload than anything that had gone before.

Blasting such a mass out of the Earth’s orbit required more than 3.5m kilograms of thrust lift off.

Despite the risks involved in space travel, Worden says one of the scariest moments came while boarding the rocket.

“Our spacecraft was 350 foot tall, so when we got ready for launch we took an elevator to the 35th floor,” he says

“I know some of the guys got jittery stomachs from looking down.

“Being an astronaut going into space is a whole lot different game from looking down over the top of a building all the way down to the ground.”

The Saturn V rocket launched on July 26 1971, bringing an end to the crew’s three years of training carried out over 70-hour weeks.

“If you don’t have a sense of humour during that time, you aren’t going to make it. It’s just too much stress,” Worden claims.

The pilot was also keen to tackle common misconceptions over what ‘lift-off’ really feels like.

“You’ve all seen movies where faces get distorted during launch because of the G-force – that’s absolute nonsense.

“We didn’t even know we had left the launchpad. Control had to tell us that we were on our way.”

The astronauts then fired up the S-IVB engine which would power the rocket to the Moon and accelerate it from 17,500mph to 25,500mph.

Roughly two thirds of the way to the Moon, the lunar gravity became greater than that of the Earth and the spaceship was captured by the gravity of the Moon and pulled towards its far side.

After un-docking from the S-IVB engine and manoeuvring the lunar module to the front of the craft, Worden says: “We were on our way to the surface.”

While his two crew-mates travelled to the lunar surface, as Command Module pilot, Worden spent his time in orbit photographing the Moon’s surface.

“David and James were told to pick up a rock of every different colour they could find,” Worden says.

“Meanwhile I was in orbit by myself doing the really heavy science work.”

Worden orbited the Moon a total of 75 times and photographed 25% of its surface with high resolution and mapping cameras — which he claims provided 1,000 times more data than Scott and Irwin gathered.

Another key part of Worden’s mission to the Moon was completing the first deep-space extra-vehicular activity (EVA) to retrieve the photos he had taken.

To collect the films from the side of the spacecraft, Worden had to step from the ship into space while it floated at a distance of 50,000 miles from the Moon.

“I brought the film back three times and on the third time I put my feet in some foot restraints, stood up on the outside of the service module and just looked around,” he says.

“Just by turning my head, I could see both the Earth and the Moon.

“Now that’s a unique position to be in where you can see both of them at the same time, it’s really neat.”

Worden says he regrets not being able to remain outside for longer, because it was “so much fun”.

Despite the pioneering nature of the feat, Worden says he “didn’t even think about it” during the spacewalk.

“You’re so busy concentrating on what you have to do that you don’t have the chance to wonder, ‘gee, I’m all up here by myself’.”

Although Worden had never wanted to become an astronaut until coming across the job listing, he still has possesses an obvious passion for space.

When asked whether NASA should go back to the Moon his eyes light up as he says: “I wouldn’t mind going back there myself.”