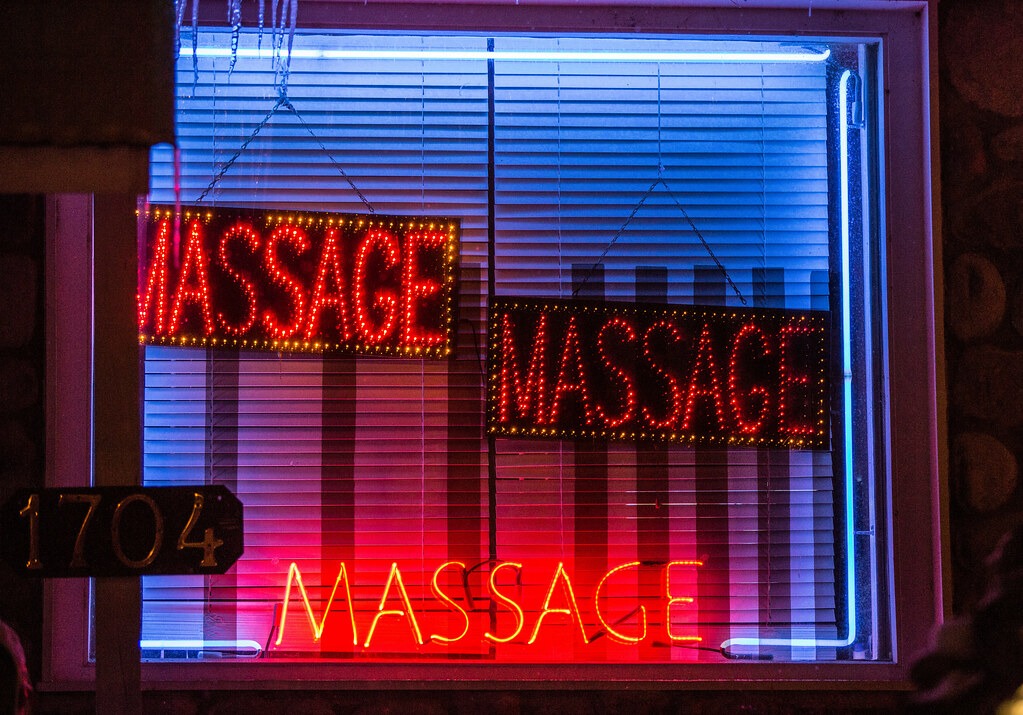 Illicit massage businesses are a hotspot for human trafficking in the US (Credit: Flikr/Tony Webster)

Human trafficking is a worldwide problem characterised by the violence, brutality and coercion imposed on its victims — many of whom are forced into the sex trade. A host of non-profit groups exist to help repatriate these individuals, but the use of technology is causing a step-change in how they’re found in the first place. Sherrie Caltagirone tells Peter Littlejohns how the organisation she founded is using data analytics to identify victims and offenders.

In June this year, the US government released its 2019 Trafficking in Persons Report — an annual document reporting on the global scale of the crime.

A foreword from US Secretary of State Mike Pompeo warned human trafficking deprives “24.9 million people of their freedom and basic human dignity”.

Sherrie Caltagirone, founder and executive director of counter-trafficking organisation Global Emancipation Network, says the real number could be even higher.

“The data we have on human trafficking is actually appalling, and estimates range between 20 million and 45 million — more than a 100% margin of error.

“The best evidence we have is that the most vulnerable populations are where people are most likely to be trafficked.”

Caltagirone cites areas of South Asia, South East Asia, parts of Africa and Latin America as some of the hot-spots for the vulnerable to be preyed on by traffickers.

Within these areas, she says vulnerable people are the most likely to be victims, citing foster children, LGBTQ youth, indigenous populations and people in conflict zones as just some of the at-risk groups.

Because of the range of activities victims are forced into, it’s difficult to pinpoint exactly which industries are drivers for the crime.

“I wish I could sit here and say the clothing I’m wearing was definitely not impacted by human trafficking — but I can almost guarantee you that it was,” says Caltagirone.

A key area where the Network has been using data analytics is within its work to disrupt the illicit massage industry in the US.

Through a partnership with Splunk for Good — the non-profit arm of tech firm Splunk — and management consultancy giant Accenture, Caltagirone’s organisation built a strategy and created a tool that uses data on the internet and its seedy underbelly the dark web to identify businesses profiting from human trafficking.

“A lot of massage parlours are actually brothels that people can just walk into and buy sex, and a good number actually engage in human trafficking as well.

“Victims tend to come from China and Korea, and go through New York, where they’re sent to fraudulent massage schools — then they’re assigned to individual businesses.”

Each of these movement points in the trafficking journey creates data, according to Caltagirone, and using tools she refers to as “crawlers” and “scrapers”, the Network is able to collect it and draw correlations that help them identify victims and the businesses they’re trafficked into.

“There’s airline information, visa information, recruitment ads that led to victims being picked up in the first place — and then those massage schools have to issue some sort of diploma authorised by the National Board,” she adds.

When it comes to establishing beyond reasonable doubt which businesses are engaged in human trafficking, the Network analyses much different data, some of which is provided to it by law enforcement agencies or accessed as part of public records.

The data flows through a platform called Minerva, which has embedded software from Splunk, dark-web data collector Dark Owl, Microsoft and others to collect, store and analyse information.

“Many illicit massage parlours go through the process of at least trying to get some sheen of legitimacy by applying for a business licence or a licence to be a massage therapist,” says Caltagirone.

“We’re able to gather all of those details, make them machinable through Splunk’s software, and draw correlations based on things like disciplinary actions, revocations or suspensions, and legal cases for sexual misconduct and prostitution.”

Another chunk of data is drawn from internet reviews. Using a subset of AI called natural language processing, tools within the Network’s technology stack scan the words to identify common themes that suggest an organisation may be implicit in the sex trade.

The Network can’t necessarily implicate businesses in a crime using its correlative evidence, but it can and does create shortlists of suspect massage parlours that are handed over to law enforcement agencies.

In Florida, where the Network’s strategy was first applied, it has identified 20% of the 2,500 massage businesses with online reviews as likely to be a part of the illegal sex trade or engaged in human trafficking, according to Caltagirone.

Police investigations followed after the findings, which she claims resulted in arrests for both crimes, as well as money laundering in some cases.

The US isn’t the only place the Network — which hopes to apply its strategies globally – is helping victims of human trafficking.

In the UK, where there are 35,000 schools, children are vulnerable to being snatched by human traffickers, and images of them often surface on the dark recesses of the internet.

The Network and technology partner Splunk for Good have developed an image recognition system that helps verify a child’s identity by matching the image to a school.

“It’s difficult to say this image definitely matches this school, but if we can even narrow it down to 20 schools, law enforcement can identify the victim faster,” she adds.

“Before, law enforcement was lucky if they could get an identification of the school in two weeks — now we can cut it down to seconds.”

According to Caltagirone, the UK is in the process of releasing legislation that forces all UK schools to sign up to the system.