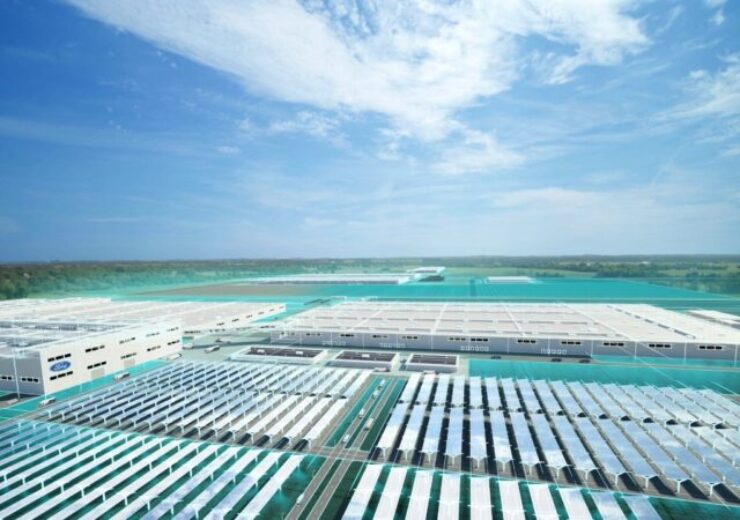 Illustration of the $5.6bn Blue Oval City campus to be built by Ford Motor and SK Innovation in Stanton. (Credit: The Ford Motor Company)

Ford Motor and SK Innovation, through a new joint venture called BlueOvalSK, will invest $11.4bn in the US towards the production of new electric vehicles (EVs) and advanced lithium-ion batteries.

The investment will be made for developing two technologically advanced campuses in the states of Tennessee and Kentucky.

The campuses will be used for manufacturing the next generation of electric F-Series trucks and batteries to be used in future electric Ford and Lincoln vehicles. Production at the two campuses is expected to start in 2025.

The partners will spend $5.6bn to build a campus in Stanton, Tennessee. Dubbed as Blue Oval City, the Tennessee campus will operate as a vertically integrated ecosystem for Ford Motor.

The US automobile manufacturer will assemble an expanded line-up of electric F-Series vehicles at the Blue Oval City campus.

Additionally, the carbon-neutral campus will have a BlueOvalSK battery plant, key suppliers, and recycling. The plant will employ nearly 6,000 people and will have a production capacity of 43GWh per year.

Ford Motor said that it will construct a dedicated battery manufacturing complex alongside South Korea-based SK Innovation in central Kentucky with an investment of $5.8bn.

Dubbed as BlueOvalSK Battery Park, the complex will have twin battery plants to produce locally assembled batteries for powering the next-generation electric Ford and Lincoln vehicles.

The twin co-located battery plants will be designed to produce up to 86GWh annually. Each of them will have a production capacity of 43GWh per year.

Ford Motor president and CEO Jim Farley said: “This is our moment – our biggest investment ever – to help build a better future for America.

“We are moving now to deliver breakthrough electric vehicles for the many rather than the few. It’s about creating good jobs that support American families, an ultra-efficient, carbon-neutral manufacturing system, and a growing business that delivers value for communities, dealers and shareholders.”

The formation of the BlueOvalSK joint venture will be subject to the signing of definitive agreements, receipt of regulatory approvals, and other conditions.

SK Innovation’s share of the overall investment will be KRY5.1 trillion ($4.32bn). The investment to be made between October 2021 and December 2027 will be through its subsidiary SK Battery America.

The investment announcement follows the signing of a memorandum of understanding (MoU) between Ford Motor and the South Korean group in May 2021.

SK Innovation battery business president Dongseob Jee said: “We are proud to be partnering with Ford as they open a new chapter in automobile history.

“We are excited to be taking this decisive leap together, as partners, and to bring about our common vision for a cleaner planet. Our joint venture, BlueOvalSK, will embody this spirit of collaboration.”

Ford Motor will also invest $90m on its own in Texas as part of a larger $525m investment in the US in the next five years towards developing highly skilled technicians and for supporting its portfolio of connected electric vehicles.