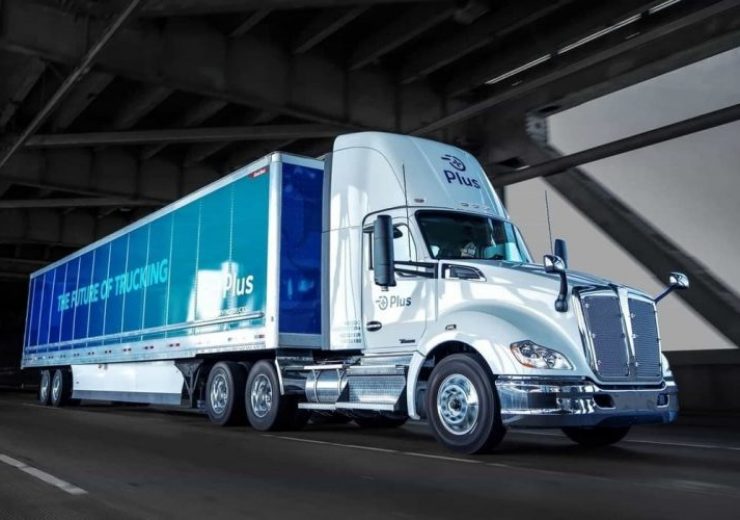 Plus set to go public through $3.3bn SPAC deal. (Credit: Plus)

Plus, an autonomous truck technology company, has agreed to merge with Hennessy Capital Investment Corp. V (HCIC V), a special purpose acquisition company (SPAC), in a deal that values the combined company at $3.3bn.

The deal will enable the Silicon Valley start-up to go public with its trading likely to be on the New York Stock Exchange (NYSE) under the ticker symbol – PLAV.

Plus CEO and co-founder David Liu said: “This transaction enables Plus to continue growing our business globally, so that fleets and drivers can benefit from our revolutionary technology and usher in a new generation of innovation.

“At the same time, the transaction introduces a partner in HCIC V that shares our focus on sustainable technology and infrastructure, is aligned on our growth and value creation objectives, and recognises the challenges trucking companies face today.”

Established in 2016, Plus is engaged in equipping trucks with its full-stack Level 4 (L4) autonomous driving technology called PlusDrive.

The company is planning to begin mass production of PlusDrive this year with heavy-truck manufacturer FAW.

Apart from that, the company will trial commercial freight operations with some of the largest fleets in the US and China. It is also working with truck manufacturer IVECO to jointly develop autonomous trucks that will be used in China, Europe, and other regions.

The PlusDrive solution uses a data engine that makes use of real-world driving data to upgrade algorithms continuously to help the trucks reach L4 autonomy.

It also leverages advanced sensing technologies such as radar, LiDAR, and cameras to offer a 360-degree sensing system.

A truck equipped with the PlusDrive technology can identify objects nearby and evade them safely through the data collected by the sensors.

Recently, the autonomous truck technology company secured an additional $220m in an extension of the $200m funding round that was held in February 2021.

The merger with HCIC V will give the company gross proceeds of around $500m. This includes nearly $345m of cash held in HCIC V’s trust account, assuming there are no redemptions by its public stockholders.

Furthermore, the transaction is being supported by private investment in public equity (PIPE) of $150m from funds and accounts managed by BlackRock, D. E. Shaw group, and other institutional investors.

In the combined company, Plus’s existing shareholders will have a stake of around 80%.

HCIC V CEO Daniel Hennessy said: “HCIC V was formed with the goal of merging with a company that provides sustainable technologies. While we evaluated a number of potential partners, Plus stood out for its unique AI-powered autonomous trucking technology, its partnerships with OEMs and world-class customers, and its strategic roadmap to start the broad commercialization of its intelligent transportation solutions today.”

The merger, which is subject to HCIC V’s shareholders’ approval, regulatory approvals, and customary closing conditions, is anticipated to close in Q3 2021.