From drones to mechanical dogs, these robots could be delivering your parcels soon

Ford's new bipedal robot concept with Agility Robotics is the latest in a long list of autonomous delivery solutions, with several companies looking to transform the way we receive packages 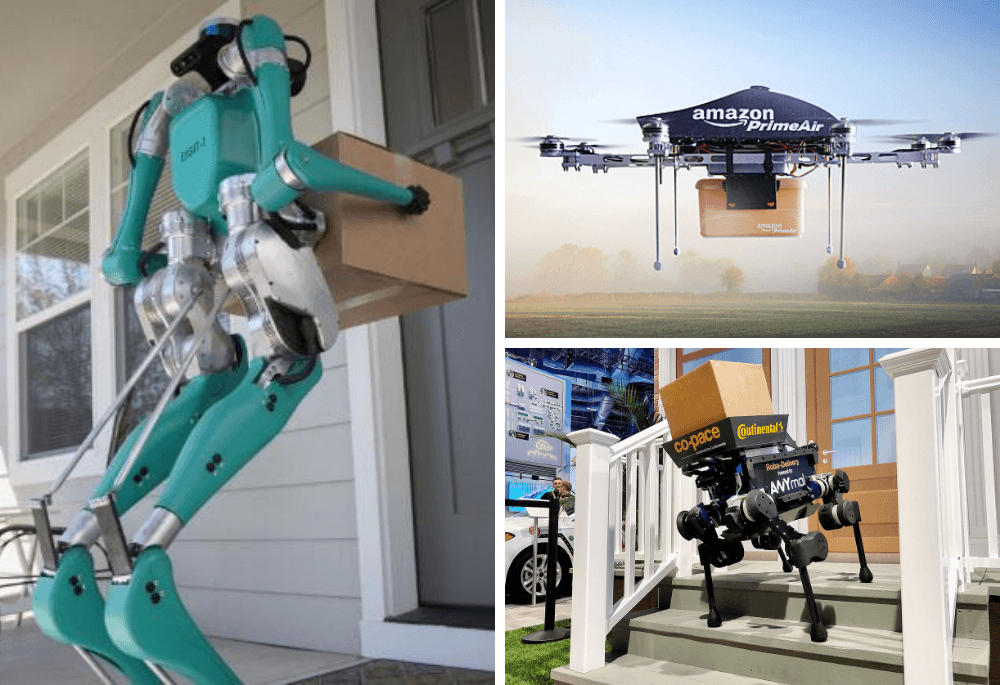 We could soon be sharing the streets with robot dogs and mechanical postmen in order to meet the growing demand for next-day delivery.

Several companies are competing to innovate on the traditional delivery van and driver combination.

It could mean your local postie is the latest to be affected by the shift towards automation, which the Office of National Statistics predicts could affect 1.5 million jobs in the UK.

The ultimate ambition is to find a solution that removes the need for humans during the parcel transportation process in order to meet increased demands from e-commerce consumers – something these companies are all aiming to achieve.

US car manufacturer Ford has developed a bipedal robot in conjunction with Agility Robotics – one of the top robotics companies researching two-legged movement.

The robot, which has been dubbed Digit, has the ability to navigate obstacles and walk up stairs in order to reach its destination.

It is capable of carrying packages weighing up to 18kg in its two arms and could be used in conjunction with self-driving vehicles in order to travel longer distances and reach its destination quicker.

Announcing the partnership last month, Ford said: “When a self-driving vehicle brings Digit to its final destination, the vehicle can wirelessly deliver all the information it needs, including the best pathway to the front door.

“Whether we are working side-by-side with robots in our numerous factories around the world or living with them as they help push packages to our door, our primary goal is to ensure they are safe, reliable and capable of working alongside people in intelligent ways.”

While Ford has plans to release an autonomous taxi and delivery service by 2021, the delivery robot concept remains a research project for the time being.

German automotive manufacturing and technology company Continental is perhaps best known for its tyres, but has partnered with ANYbotics to develop a new autonomous delivery concept.

A driverless shuttle drops off a fleet of robot dogs, which then transport the parcels to the recipient’s front door.

The robotic delivery service was debuted at the electronics show CES 2019 and Continental – which has no plans to release the service yet – claims it is a more effective and efficient solution for the transportation of goods.

It is hedging its bets on predictions that the need for delivery transport will soon outpace the demand for transport from inner-city commuters.

It also claims automated goods delivery is forecast to provide an answer for up to 80% of all business-to-consumer deliveries.

“With the ever-increasing popularity of online shopping and the growth of megacities, unique solutions for package delivery will be needed,” says Continental.

“Driverless vehicles combined with delivery robots could be the perfect answer.”

Amazon once claimed that “one day, seeing Prime Air vehicles will be as normal as seeing mail trucks on the road”.

With the launch of its new delivery drone, Amazon claimed that the concept could be off the ground in a matter of months.

Amazon CEO Jeff Bezos originally stated that a fleet of autonomous drones would allow for 30-minute delivery times by 2018.

Although customers have had to wait an additional year, it appears that a newly designed drone could make the concept a reality soon, with Amazon executive Jeff Wilke stating they will be used commercially “within months”.

The new Amazon Prime drones have six rotors, use visual, thermal and ultrasonic sensors, and are capable of carrying packages weighing up to 5lb (2.3kg).

Tests have taken place in the US, UK, France and Israel but implementation of delivery drones will be reliant on airspace regulations allowing it.

The company claims the first fully autonomous delivery took place in Cambridgeshire on 7 December 2016, delivering an Amazon Fire stick and bag of popcorn in 13 minutes.

Amazon is also exploring other uses for its drones including property surveillance.

Its Project Wing delivery drones differ from Amazon’s in the fact they are fixed-wing aircraft that can transform into a quadcopter rather than the purely propeller-powered Amazon prime aircraft.

The project is designed to quickly deliver packages to rural areas and is reportedly capable of flying five miles in five minutes.

The technology was initially developed in Alphabet’s X Laboratory – commonly referred to as the Moonshot Factory – which claims the aim is to increase access to goods, reduce traffic congestion and help ease CO2 emissions.

Sensors allow it to navigate around other drones and obstacles such as trees, buildings and power-lines without the need for a driver.

Initial tests have been conducted in Australia, where the Project Wing drones delivered burritos to hungry customers, while further experiments are planned for Helsinki, in Finland.

Starship Technologies has opted for a more conventional method of delivering items.

Its driverless delivery vehicles use cameras, ultrasound sensors, radars and GPS to navigate pavements and deliver products to customers’ drives.

Although they will be unable to tackle stairs, like Ford’s Digit, the technology is closer to becoming a reality.

Trials of the delivery service have already taken place in Milton Keynes and Greenwich, London, in the UK.

Users were able to sign up to the service through an app, which cost £7.99 a month for unlimited deliveries, and could get groceries from supermarket chain Co-op dropped off at their door.