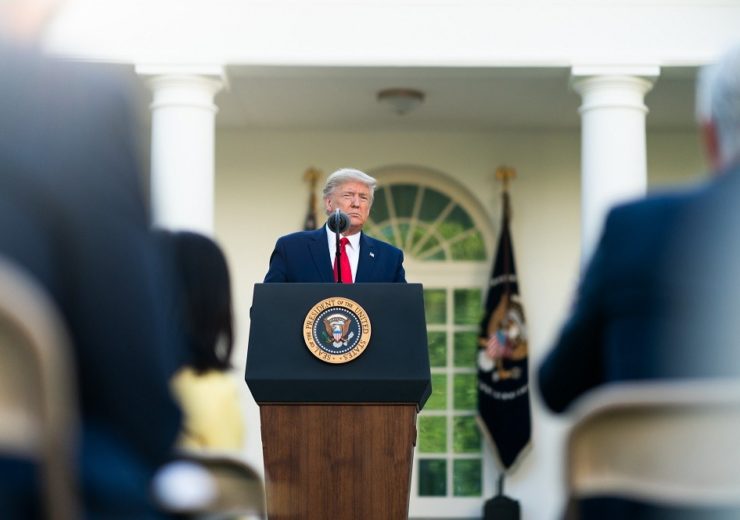 US President Donald Trump said on Twitter he has instructed officials to set out a plan to provide funding to the country's struggling oil and gas industry (Credit: Flickr/White House/D Myles Cullen)

Donald Trump has hinted at a bailout deal for his country’s struggling oil and gas industry, a day after a key US crude benchmark plunged into negative price territory.

In a tweet today (21 April), the US President said he had instructed his energy secretary Dan Brouillette and Treasury secretary Steven Mnuchin to devise “a plan to make funds available so that these very important companies and jobs will be secured long into the future”.

He added: “We will never let the great US Oil & Gas Industry down.”

We will never let the great U.S. Oil & Gas Industry down. I have instructed the Secretary of Energy and Secretary of the Treasury to formulate a plan which will make funds available so that these very important companies and jobs will be secured long into the future!

No further details of the funding were given. The US Department of Energy has been contacted for comment.

The US oil industry has been tightly squeezed during the current market crisis, as domestic operators struggled to contend with a deluge of cheap foreign crude during the Saudi-Russia tussle for market share, coupled with sharply-receding global demand brought on by the coronavirus pandemic.

The president’s announcement comes a day after West Texas Intermediate (WTI) – the benchmark for US crude oil – plunged into negative pricing territory for the first time in history.

Commodity traders had rushed to offload their WTI delivery contracts for the month of May amid concerns about where to physically store the oil as key storage inventories approach maximum capacity.

Despite a rebound in prices today, WTI remains extremely low – priced at $3.60 per barrel at 4pm GMT, with lingering concerns over dwindling June storage capacity for a commodity that has been under pressure since the start of the coronavirus outbreak.

Storage pressures are expected to peak in May and June, potentially spelling more troubles ahead for oil producers which are running out of places to send their reserves.

Last week, the Railroad Commission of Texas – the state’s oil regulator – held consultations on whether or not to impose mandatory production restrictions as a means to ease the load on storage and stabilise the volatile market.

US oil production is expected to decline by 500,000 barrels per day this year, but it is unlikely to be enough to address the issue of inventories brimming to full capacity – even with the US energy department pledging to open up the country’s strategic petroleum reserve to take some excess supply off the market.

Demand for oil has evaporated in the past few months as a result of lockdown measures and low economic activity resulting from the health crisis.

The International Energy Agency (IEA) recently warned that global oil demand will decline by 9.3 million barrels per day (bpd) this year – around 9% of the overall picture.

A recent agreement, backed by the US, between members of the Opec+ alliance to reduce their collective oil production by 9.7 million bpd during May and June, as well as lesser reductions through to 2022, had been hoped to go some way to allieviating some of the burden of oversupply and relatively-low commodity prices.

The agreement was touted by Trump – who had publicly brokered the negotiations – as a “great deal for all”.

It seems, however, that the Opec+ production cuts will have little immediate effect on the much bigger issue of lost demand due to coronavirus – with no date in sight for when economies might be able to reopen and begin consuming again.

Rystad Energy oil market analyst Louise Dickson said: “The storage shortages are real and will not be resolved at the current market conditions, even with the agreed Opec+ cuts.

“More output curbs are needed, generous ones, in order to see supply and demand balancing again.

“With no more generous production cuts announced, and as the last remaining storage facilities get filled to the top with oil, we can expect to see such huge swings in oil prices from now on.

“The mild daily changes in oil price that we were used to some months ago may now be calm luxuries of another era.”