A US-backed Opec+ deal to slash global crude output by 9.7 million bpd was hoped to boost the struggling market - but so far oil prices have not recovered as collapsing demand remains a critical issue 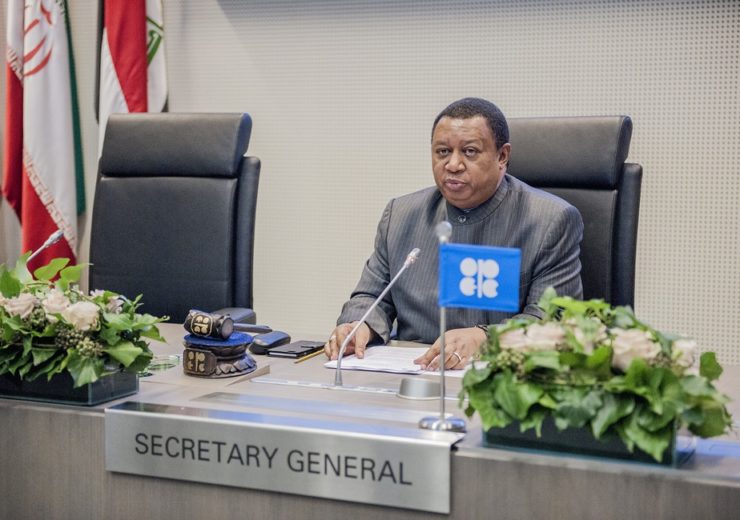 Despite the historic Opec+ deal to cut global oil production in a bid to boost commodity prices that have more than halved since the turn of the year, there have been few signs of a price recovery in a market still grappling with coronavirus-weakened demand.

Crunch meetings of the oil-producer alliance, as well as energy ministers of the G20, were held at the end of last week, with frantic phone calls continuing over the weekend as oil economy leaders scrambled to push an agreement over the line.

Eventually, the world’s biggest oil producers committed to reduce their collective production by 9.7 million barrels per day (bpd) for the next two months, with lesser reductions planned to last until 2022.

But since markets reopened on Monday (13 April), crude oil prices have barely shifted from their position before the summits took place.

In fact, as of Wednesday (15 April) morning GMT, Brent crude is trading at around $28 per barrel and West Texas Intermediate at $19 per barrel – both down roughly $3 respectively from their pre-agreement levels.

About a third of global oil demand has been wiped out as a result of the pandemic, with enforced lockdown measures and slowing industrial activity putting unprecedented levels of pressure on the market.

While the agreements reached by energy leaders over the weekend may have stabilised the price decline by ending the Saudi-Russian price war, this issue of collapsing demand remains a critical factor to contend with – and one that is “well in excess” of the industry’s capacity to adjust, according to the International Energy Agency (IEA).

What did Opec+ agree to tackle falling oil prices?

Nevertheless, the Opec+ agreement to curtail global oil production – the most extensive that has ever been made – should not be overlooked.

With the unusual involvement of the US and other G20 members not normally affiliated with the oil-producer alliance – the likes of Canada and Brazil in particular – an agreement was reached to reduce crude oil output by 9.7 million bpd during May and June.

For the following six months to the end of December, this will be adjusted to a 7.7 million bpd curtailment, and then a 5.8 million bpd reduction through to April 2022.

A baseline level for the cuts was set at October 2018 production levels – except for Saudi Arabia and Russia, the nominal leaders of the so-called cartel, which both agreed to a baseline of 11 million bpd.

While there was no formal commitment from the US, its involvement in the deal was significant, with the world’s largest oil producer offering to deliver market-driven output reductions in tandem with Opec+.

Official data published last week shows US crude oil production is on track for its first annual contraction this year since 2016 – with a further decline expected for 2021.

While the likes of Russia and Saudi Arabia have formally mandated their output cuts, the US points to this natural, price-led reduction as its own contribution to the co-ordinated effort.

The country will also take action to open its strategic petroleum reserve, US energy secretary Dan Brouillette to the G20 meeting, aiming to “store as much oil as possible” and remove some of the global surplus from the market.

The big Oil Deal with OPEC Plus is done. This will save hundreds of thousands of energy jobs in the United States. I would like to thank and congratulate President Putin of Russia and King Salman of Saudi Arabia. I just spoke to them from the Oval Office. Great deal for all!

A final-hour intervention by the US’ President Donald Trump, who had been central to bringing Russia and Saudi Arabia back to the negotiating table, was also crucial to ending Mexico’s surprise derailment of the process.

The US agreed to shoulder some of the burden for its neighbour, which had balked at the suggestion of cutting 400,000 bpd from its national output, saying it would only limit production by 100,000 bpd.

Oil producers in the US have been particularly hard hit by the falling oil prices, with shale operators struggling to cope with the low price environment as warnings of production shut-ins and bankruptcies threaten to derail the booming energy industry that has been a centrepiece of the Trump presidency.

While crude oil prices may have failed to rebound in the immediate aftermath of the Opec+ announcement, analysts suggest the market effect will be more noticeable later in the year as pressure on storage inventories – which have been pushed to their limit amid the recent oversupply – begins to relent.

Wood Mackenzie’s vice president for macro oils Ann-Louise Hittle said: “Even if poorly implemented, the agreement is substantial, and will make a difference to the market.

“Partial compliance won’t stop this production agreement from having a big – and swift – impact on supply and demand fundamentals.

“We expect the second half of 2020 to show an implied stock draw, in contrast to the record-breaking oversupply of the first half of the year.

“That will support and lift prices significantly. The market will recognise this once the storage builds slow this quarter and start drawing down in the second half.”

She added that despite the ongoing lockdowns across Europe, India and the US, China – the world’s biggest oil importer – is now beginning to show signs of economic recovery, promising a significant boost to oil markets.

“A recovery in oil demand is underway in China. The country has managed to largely contain the Covid-19 outbreak and is gearing up efforts to bring economy back on track,” said Hittle.