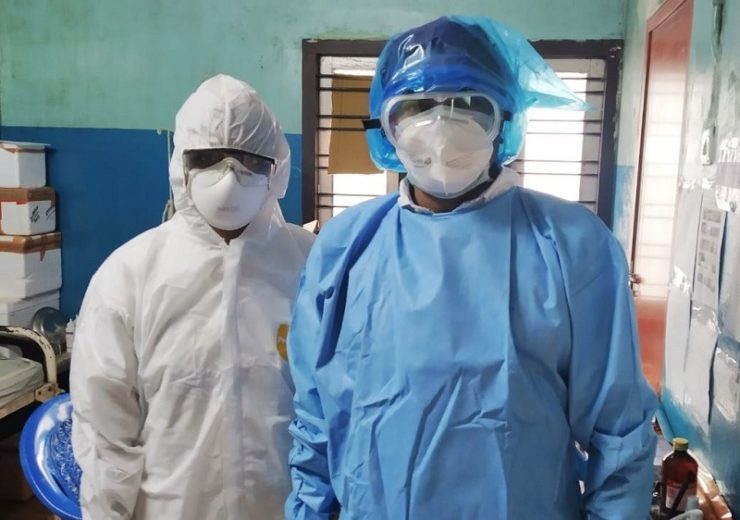 Almost half of UK doctors had to source their own PPE during the height of the Covid-19 pandemic's first wave, according to the British Medical Association (Credit: Wikimedia Commons/Javed Anees)

The UK must ensure it has enough personal protective equipment (PPE) for its “conscripted” frontline healthcare staff if and when a future pandemic arrives, an emergency services worker has told a Conservative MP.

Jon Wharnsby, a firefighter who has assisted with the Covid-19 response for London Ambulance Service, said it was “ridiculous” how doctors, nurses and paramedics had been left with huge shortages of kit like face masks, gloves, visors and aprons while treating infected patients.

Speaking on a discussion panel today (12 Jun) also including minister Dan Poulter about the healthcare lessons that can be learned from the first wave of coronavirus, he said: “One of the things I’ve been struck by was a commitment of the staff to not just put themselves, but also their families, in harm’s way because the shortages in PPE were ridiculous.

“The nurses, doctors and even cleaners were our frontline soldiers – they were conscripted and sent there without the proper protective equipment to make sure both they and their families were safe.”

PPE shortages in UK show importance of preparing for future

Despite NHS officials telling the Commons Health Select Committee on 17 March – days before lockdown – there was “adequate supply” of PPE for months ahead, it soon transpired the pandemic stockpile was not sufficient for a novel virus like Covid-19 that can survive for longer outside the body than influenza.

The British Medical Association said in early May that almost half of England’s doctors were forced to source their own PPE and relied on donations.

Imported kit from Turkey and China failed safety check and even as many companies from other industries pivoted their manufacturing processes to help meet shortages, the NHS has been fighting a losing battle for much of the pandemic.

Also reflecting on the below-inflation pay rises that have made many UK public sector workers worse off financially in real terms, Wharnsby – a member of the Fire Brigades Union who was on the scene at the 2017 Grenfell Tower fire – said the country was being held together by the “goodwill” of under-funded NHS staff.

“We can’t predict what the next health issue will be but in the NHS, the one thing we will always need is PPE, regardless of which virus it is,” he added.

Wharnsby was speaking on a panel during a New Statesman online conference, titled Remaking the world after coronavirus: A global policy forum, alongside Dr Poulter, who is also a mental health practitioner, and Lord Nigel Crisp, co-chairman of the UK’s all-parliamentary group on global health.

Although Dr Poulter, a former parliamentary undersecretary of state for health services, didn’t address the PPE shortages, he agreed more “reserve capacity” was needed in the NHS.

“While there are some short-term measures that can work for this winter, when we could see a second wave of coronavirus compounded by seasonal flu, the likelihood is what we’re now facing, we will face again.

“Even if we deal with coronavirus in the next 12 to 18 months and there’s a vaccine, we could well be facing this again in five years’ time, so we need to have some reserve capacity in the NHS.”

Covid-19 has accelerated use of technology in healthcare

Lord Crisp, a former senior civil servant in the Department of Health and senior manager in the NHS who is now a crossbencher in the House of Lords, noted how lockdown and social distancing had paved the way for a greater use of technology.

He said: “One or two gains have actually been made in this pandemic and it’s accelerated some of the changes that were already been made, such as the use of technology.

Dr Poulter agreed it had brought about “overdue” changes and believes technology could help people to manage their own health better.

But he added: “When it comes to mental health, we need to think about how we re-engage care for people with more serious and chronic mental health issues.

“Virtual consultations are incredibly helpful and increase productivity, and save staff time. They can also be more patient-friendly but when you’re looking after people who are more acutely unwell, sometimes face-to-face is the only way forward.

“It’s been difficult to have that face-to-face time with those people who have more severe mental or physical illness, so this is a group of patients who have become more unwell during the pandemic.”

He admitted to being “very concerned” about the capacity of the NHS to deal with this at the same time as preparing for the problems that could arise this winter.