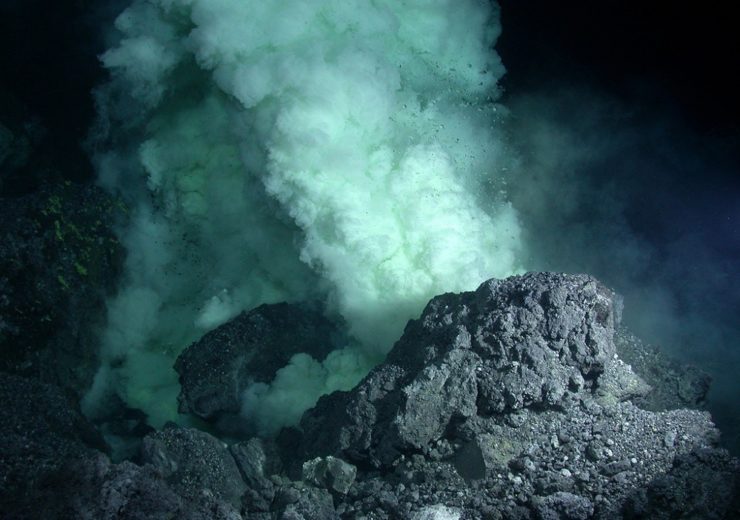 Degassing lava erupts onto the seafloor at NW Rota-1 volcano, creating a billowing cloudy plume that is extremely acidic, and is full of carbon dioxide and sulfur. (Credit: Woods Hole Oceanographic Institution)

For decades, a large area of the North Sea has remained untouched by drillers as it was widely believed the sea bed featured volcanoes – but it could now be turned into oil fields after geologists found they never existed.

An area beneath the North Sea covering 2,700 square miles, known as the Rattray Volcanic Province, was thought to be the site of three extinct volcanoes that erupted 165 million years ago.

The empty magma chambers of these “phantom” volcanoes has so far prevented oil and gas exploration in the area.

However, geologists from the University of Aberdeen, University of Adelaide and Heriot-Watt University in Edinburgh, have used 3D imaging technology to prove the claims to be incorrect – overturning “decades of accepted knowledge”.

Why did geologists believe there were volcanoes in the North Sea?

The belief stems from the fact that during the Jurassic era, a rift appeared within the North Sea, widening the divide between the British Isles and Europe.

Geologists previously believed that this “rifting episode” was a result of volcanic activity.

Dr Nick Schofield, of the University of Aberdeen’s School of Geosciences, led the study.

He said: “Previously, it was believed the area contained old magma chambers – the plumbing systems of three Jurassic-era volcanoes – that effectively ruled out the potential for oil and gas discoveries.

“However, our study has shown these volcanoes never existed at all, and that the fireworks preceding the North Sea’s attempt to create an ocean with Europe came via a series of lava fissures.

“Essentially, this gives us back a huge amount of gross rock volume that we never knew existed, in one of the world’s most prolific regions for oil and gas production.”

How did the researchers find the new North Sea oil fields?

The collaboration between the Scottish universities used research techniques previously used to test volcanic prospectivity in other areas of the UK continental shelf, which goes through the North Sea, North Atlantic, Irish Sea and English Channel.

Dr Schofield said: “We combined 3D seismic data donated to us by Petroleum Geo-Services (PGS) with well data to take a fresh look at the Rattray Volcanic Province.

“What we found has completely overturned decades of accepted knowledge.”

Could new knowledge open up North Sea oil fields up to new exploration?

North Sea oil and gas production peaked in 1999, and it is estimated supplies will run out within the next decade.

“There is a huge area under there that hasn’t been looked at in detail for a long time, because of the previously incorrect geological model,” he said.

“That’s not to say that exploration wouldn’t be challenging, but technology is constantly improving and there are still big discoveries being made in the North Sea, as we’ve recently seen in the Central Graben and Viking Graben areas.

“As the old saying goes, often the best places to look for oil are in places near to where you’ve already found it, and the North Sea is a prime example of that.”

Industry body Oil and Gas UK’s operations optimisation manager Katy Heidenreich said: “This interesting academic research is an excellent example of the value that can be created by making data more widely available.

“Fresh and pioneering thinking, combined with new data analysis techniques, can challenge previous exploration models and deepen our understanding of the significant UK North Sea resources yet to be recovered.

“It places us in a good position to realise our ambitions to add a generation of productive life to the UK continental shelf.”