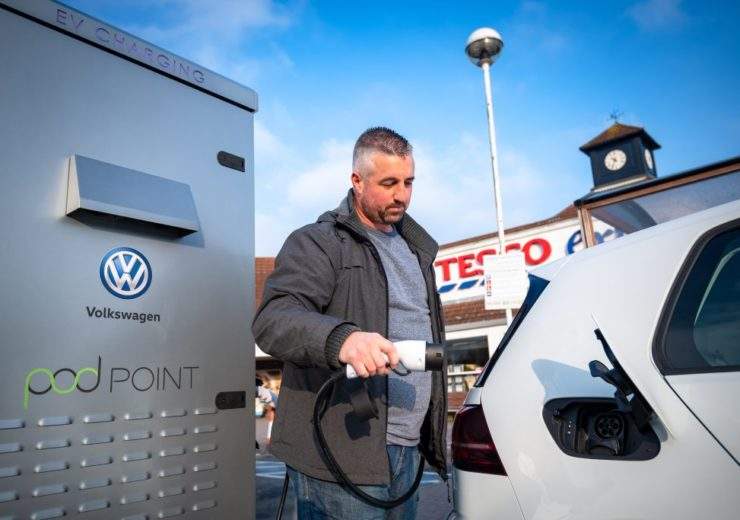 Almost 2,500 charging bays for electric vehicles will be installed at Tesco stores over the next three years in a partnership with Volkswagen and Pod Point

The UK’s largest retail electric vehicle charging network is to be built after Tesco and Volkswagen teamed up.

The nation’s largest fuel retailer and the world’s biggest vehicle manufacturer have committed to installing almost 2,500 charging bays across up to 600 Tesco stores over the next three years.

Drivers will be able to charge their electric cars using a standard seven kilowatt (7kW) fast charger for free, or use the rapid 50kW charger for a fee described as “at the market rate”.

Tesco UK and Ireland CEO Jason Tarry said: “This is part of our wider commitment to addressing the environmental challenges that matter most to our customers, colleagues and communities.

“We want to be the leading electric vehicle energy provider and to support our customers with more sustainable solutions.

“Our EV network provides a sustainable choice for our customers and charging while they shop is another little help to make their lives easier.”

Why does the UK need an electric vehicle charging network?

Sales of electric and hybrid vehicles have increased by more than 20% in the UK this year.

Charging bays will be based in prominent designated spaces at Tesco Extra and Superstore car parks throughout the UK, and will be installed by UK electric vehicle charging network operator Pod Point.

Tesco claims tens of thousands of drivers will be able to charge, or part re-charge, their electric vehicles each day while carrying out their shopping once all the new units are fully operational.

The bays will be compatible with “the majority of electric cars” and not just VW models.

The initiative builds on the supermarket’s commitment to 100% renewable electricity made in May 2017.

New VW electric cars and car-sharing network on the way

Volkswagen has two fully-electric vehicles, the e-Golf and e-up!, but will launch its new ID family of models over the next two years.

A new Golf-sized electric model will go on sale next year, followed in 2020 by production versions of the ID. Buzz people carrier and ID. Crozz SUV concept cars.

Next year, the manufacturer is also set to launch Volkswagen We Share, an all-electric car-sharing scheme.

About 2,000 cars will be introduced to the streets of Berlin for on-demand hire via an app, with plans to roll-out the concept in other major cities with populations of more than one million in Europe and North America from 2020.

Geraldine Ingham, head of marketing at Volkswagen UK, said: “This incredibly exciting partnership with Tesco, powered by Pod Point, underlines the scale and ambition of our electric car programme in the UK.

“Working with these partners to provide such an extensive network of EV chargers should leave no one in any doubt about the Volkswagen brand’s wholehearted commitment to an electric future.”

“It is a massive leap forward for the UK and a significant step in our mission to put a Pod Point everywhere you park,” he added.

According to the Society of Motor Manufacturers and Traders (SMMT), more than 120,000 “alternatively-fuelled vehicles” have been registered in the UK so far in 2018 – a 22% increase on the same period last year.

As the number of electric cars on UK roads increases, the industry has called on a rapid improvement on the charging infrastructure.

The Tesco-WV partnership will increase the UK’s electric vehicle charging network by 14%.

The initiative has been welcomed by the government – which has pledged to ban petrol and diesel new car sales by 2040 – and World Wildlife Fund (WWF) environmental charity.

Jesse Norman, the minister for electric vehicles at the Department for Transport, said: “The government is committed to making the UK the best place in the world to build and own an electric vehicle.

“For that we need high quality infrastructure in place to support ultra-low emission vehicles around the country.

“The government set out plans in its Road to Zero strategy to deliver a significant increase in this infrastructure and we welcome Tesco’s pledge to roll out over 2,400 new charge bays across their stores.”

Gareth Redmond King, head of climate change, environmental policy and advocacy at the WWF, added: “Businesses need to decide if they are preparing for a ‘net zero’ world or for climate breakdown.

“Tesco has clearly made its decision and is going full throttle in its commitment to transition to a low carbon future.

“It’s this ambition and determination that makes us excited to partner with Tesco as we work together to make sustainable choices easier for all.

“One of the big challenges to EVs is that people worry about where they’re going to charge their cars – this roll-out goes a long way to tackling that issue.

“It will make it easier for everyone to reduce their impact on the planet and we hope that others will follow where they lead.”