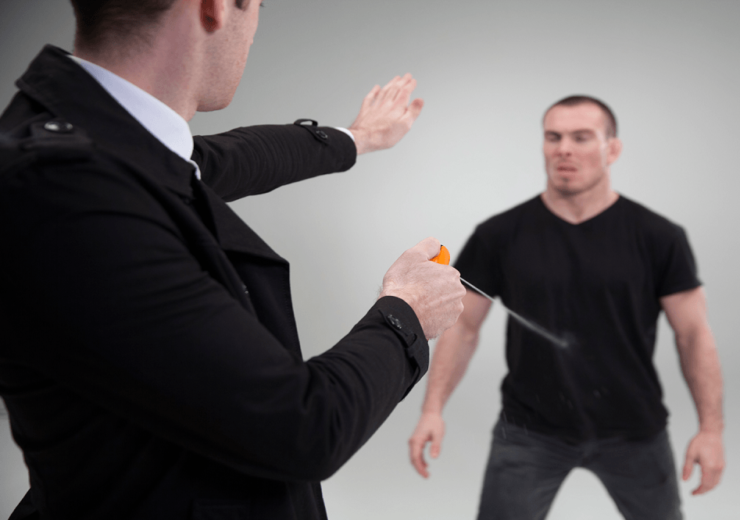 SelectaDNA has become one of the main weapons for police officers in the fight against thieves, burglars and moped gangs. James Brown, managing director of the UK family business behind the forensic technology, talks to Dan Robinson about how DNA spray – which is also being adopted by companies including Tesco, Harrods and McDonald’s – is a “criminal’s worst nightmare”

Moped-riding attackers and snatchers have been the scourge of cities like London and Edinburgh in recent years, but police may finally have found the answer to the problem in a small canister.

By arming officers with synthetic DNA spray that tags offenders with a unique forensic ID code, it gives them a valuable weapon that can help track down suspects and link them directly to a crime scene.

And as police figures showed it has reduced moped-related crimes by 44% in London and 60% in Edinburgh, it also appears to be acting as an effective deterrent.

James Brown, managing director of Seletamark Security Systems, which designed the SelectaDNA technology that can also be applied on possessions as a colourless coating, says: “It makes criminals really assess the risk they’re willing to take and what lengths they will go to in order to ensure they aren’t traceable.

“DNA solutions provide a link back to a location or a crime – and that’s a criminal’s worst nightmare.”

History of SelectaDNA: Creating a formula for property marking

Selectamark Security Systems has been experimenting with its formula for protecting ordinary people from becoming victims of crime since 1985.

Launched that year by James’ dad Jim Brown, the business has remained in the family throughout its history and continues to be based in Kent, where 20 people are employed at its head office within the London Borough of Bromley.

Its first product was SelectaMARK, a chemical etching solution that is still used to mark possessions of individuals, homes, businesses, government departments and educational institutions.

If an item is stolen, police could identify it from the visible marking, which could not be removed by thieves.

“But there was always a strong focus on the aim of preventing theft in the first place,” says James, who took over running the company from his dad alongside brother Jason, the commercial director.

“We’ve worked with every sector you can think of based on the fact that everyone has valuable assets that are potential targets for thieves.

“So our target market is every organisation out there, as well as homeowners.”

In 2004, Selectamark developed SelectaDNA as an alternative technique for identifying possessions.

The obvious drawback of SelectaMARK was that, while it was a successful deterrent to thieves, the etching was visible.

Its new forensic marking solution, on the other hand, was virtually invisible and thus satisfied the wishes of customers who wanted a more covert unique ID that still proved ownership – a particularly important consideration for items like jewellery and antiques.

The SelectaDNA formula uses synthetically-manufactured DNA particles to create a unique identifier that can be carried in substances such as adhesives, gels or liquids and brushed on to items like IT equipment, machinery, vehicles and tools.

The solution contains a unique forensic signature that is permanent, clear and “barely visible” once it’s dried – only fluorescing under the shine of an ultraviolet light.

James explains: “The police will take a sample of that solution, which can be analysed in our forensic lab to determine the unique code.

“Every kit is unique, with its own alphanumeric ID that’s logged on our database. The buyer registers it in their identity so there’s a link back to the owner of the property.”

Over time, Selectamark has broadened its DNA solution by storing it in different carriers.

It developed an intruder spray system in 2008 that helps protect buildings from burglaries and robberies.

A canister system is placed above doors and windows that, when triggered in the event of a break-in, sprays the offender as they enter.

Like the coating, it contains an ultraviolet tracer and a unique ID tag that police can swab to take evidence in any prosecution.

It’s used by organisations including Tesco, McDonald’s, the Post Office, Shell, Balfour Beatty, universities and NHS trusts, which will also display signs around shops, construction sites, petrol stations and hospitals about the spray being used to act as a deterrent.

James, whose company has also trained three dogs to sniff out its solution, says: “While CCTV is very useful, if the offender is wearing a hood or balaclava, they can’t be identified very easily.

“But the police will often have a good idea of who it is in a local area so it then gives them the ability to apprehend that person and take a sample of the solution from their skin.

“If the analysis matches it with the property, it proves the individual was at the crime scene at the time the offence took place – and that gives the police the necessary evidence to convict that person.”

Mention moped gangs to people in London and they’ll probably tighten their grip on their most treasured possession and take a nervous glance over their shoulder.

The threat of criminals carrying out drive-by thefts and acid attacks – often on stolen mopeds and scooters as victims leave tube and train stations – has increased in recent years.

It’s coincided with more two-wheeled vehicles on the roads, a trend that experts attribute to the boom in delivery services like Deliveroo and high car insurance premiums.

In response, the city’s Metropolitan Police force has handed out 6,000 bottles of handheld DNA spray to officers over the past 18 months in a bid to crack down on a worrying problem.

It appears to have had an impact as moped crime figures for January to October last year showed there was a 44% reduction in incidents – 7,036 fewer offences – compared to the same period in 2017.

The handheld DNA tagging spray is a relatively new addition to the SelectaDNA – and, in turn, police officer – armoury and has forced offenders to reassess their chances of getting caught if they can now be linked to the scene of a crime.

James believes this is representative of a shift in recognition from law enforcement that the private security industry can help in the detection and prevention of crime as public resources have been stretched.

He says: “It gives the police exactly what they want, which is the ability to link a criminal wearing a balaclava or helmet – who they think is the offender but haven’t got the evidence – with a crime scene.

“If the police see someone commit an offence and chase after them, but then lose sight of the person before catching back up to apprehend the suspect, they can say ‘it wasn’t me, it must have been someone who looks like me’.

“But if the police manage to spray this person first before they get away initially, they have the evidence they need.

“This is particularly key in something like moped-enabled crime, when it might not be safe to pursue the offenders if they’re armed.

“Even if they dump an item of clothing, there’s likely to be another type of human DNA on that clothing, such as a hair, which police can link to them.”

It’s not just in London where the SelectaDNA handheld defence spray has been a success, with Police Scotland reporting a 60% moped-related crime reduction – equating to 278 fewer incidents – in Edinburgh between April and September 2018.

Police in the West Midlands, West Yorkshire, Merseyside, Cheshire and Surrey are also among the 93% of forces now on board, with training provided to those that are yet to adopt it in case they need to identify a DNA-tagged suspect.

Outside the world of law enforcement, security teams at Liverpool FC’s stadium Anfield carry the SelectaDNA defence spray to deter unrest around the ground, while Harrods and JD Sports are also customers.

How SelectaDNA is a deterrent to criminals

Despite the massive drop in incidents, there were only 28 arrests – and “several” convictions – linked to the spray during the nine-month reported period in London.

Instead, the biggest impact has once again been in preventing crime in the first place, believes James.

“It really does work as a strong deterrent,” he adds. “In Scotland, for example, the police didn’t actually deploy the defence spray during the period in which there was a 60% drop in moped-related incidents.

“But they made a big splash about it and criminals knew they were armed with the spray, so it drove crime down without actually being used.

“Network Rail uses our solution to mark copper cabling on the railways, and it’s the deterrent of putting signage up by the tracks saying it’s DNA-protected that makes the difference.

“On the HS1 route, it’s helped to completely eliminate cable theft, and that’s without actually catching someone doing it.”

And although the intruder and defence spray products have helped to mobilise crime-fighting efforts, the property marking solution remains a strong deterrent.

Signs are often displayed in residential streets that have previously been targeted by burglars.

Results have included an 83% reduction in burglaries in a particularly vulnerable area recorded by Greater Manchester Police over a 12-month period about six years ago.

While the synthetic DNA technology has been around for 15 years now, it’s only recently that it has begun to really be noticed after seemingly having a positive impact on crime figures.

It means Selectamark is preparing for expansion both in the UK and overseas, with James anticipating staff numbers to double in the next two to three years as both the public and private sectors embrace new security technology.

As the only company to offer synthetic DNA – its main competitor SmartWater uses a different type of chemical formula, and no DNA, in creating a unique forensic signature – it’s well-placed to take advantage.

“While we’re a small business at the moment, the potential out there is huge,” says James.

“All our expertise – our DNA scientists, app developers and data technicians – is in-house so we’re trying to be masters for everything we offer, and put our destiny in our own hands.”

But the benefits go much further than the growth of a small business, due to the types of crimes being fought against by SelectaDNA.

James adds: “These types of crimes really do have a big and long-lasting effect on victims, whether it’s a residential burglary, street robbery or a petrol station employee being confronted by armed robbers.

“Even things like copper wire theft could result in bringing down electricity networks in residential areas or a hospital, or it could be people stealing led from the roof of a church and causing thousands of pounds worth of damage.

“These are all a big deal, so there’s an element of pride in what we’re doing by helping police to drive down these crimes.”