Inside tech co-op that built Jeremy Corbyn’s website, is big on Marxism and has no boss

Web developer Outlandish is at the centre of a growing group tech co-op network - developing projects for Jeremy Corbyn, Unicef and the World Health Organisation. James Walker is given a tour of an office that pays tribute to socialist leaders and finds out how a tech co-op works without a traditional business structure 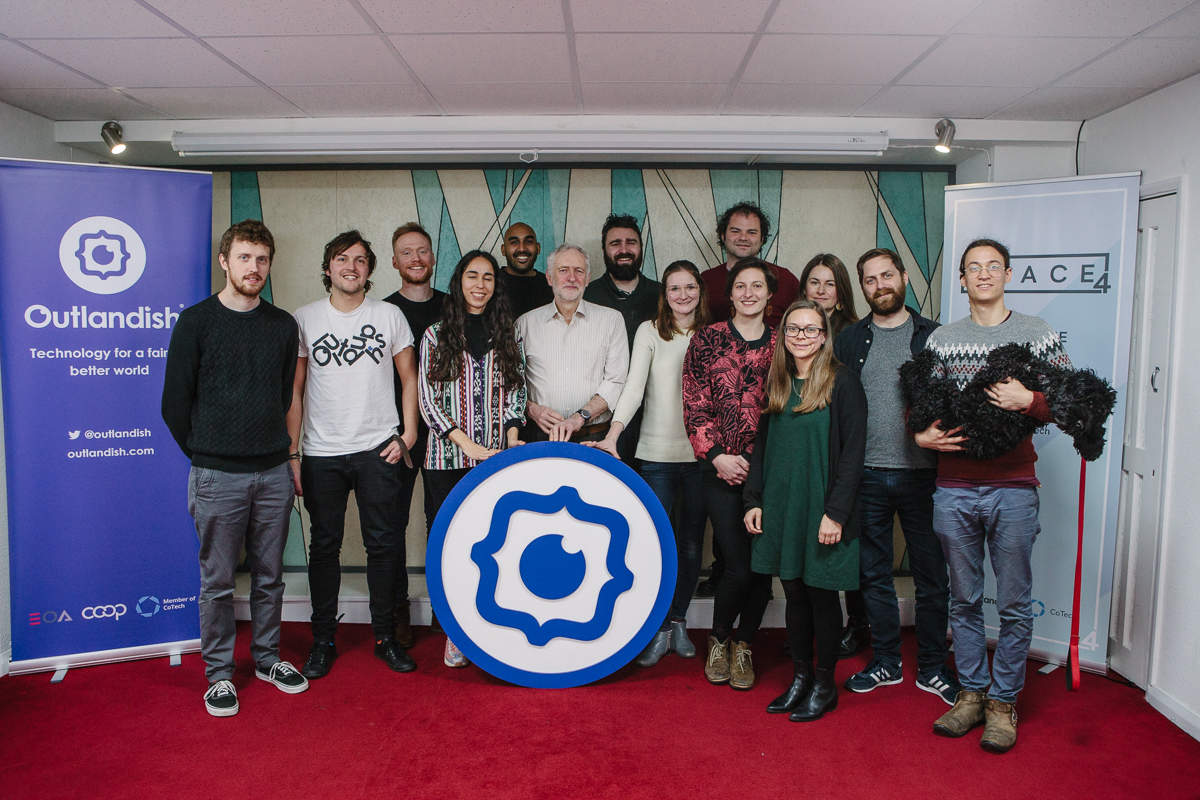 A Cuban peso bank note bearing the image of the revolutionary Che Guevara and a poster reading “You don’t have to be an anarcho-communist to work here, but it helps” are stuck on a whiteboard in the office of the tech co-op Outlandish.

“Marxist economics is amazing and his philosophy was just that – philosophy,” says founder Harry Robbins, before rushing back to work.

Outlandish is a website and application developer running as a worker co-operative from an office just off the thoroughfare of Finsbury Park, London.

Being a worker co-operative means the company functions with no rigid hierarchy – giving all members of the group a vote on major decisions.

Before the firm registered as a cooperative back in April of 2016 – six years after the company was first formed – its original members would divide earnings by time worked around a kitchen table.

Outlandish has since had a hand in forming a small tech co-op community in the UK – joining the CoTech network of co-operative tech companies as a founding member in September the same year.

“One of the principles of co-operativism – principle six – is helping other co-ops and supporting the co-op sector,” says Outlandish worker Polly Robbins, who manages Space4, its co-working and events area for like-minded organisations to use.

“So we thought that by trying to build this network, it would mean that we could refer those people to other co-ops and it’s working really well.”

Outlandish, which employs about 20 “collaborators and freelancers”, now works with 34 tech firms in the network – some of which run under more radical structures that its own.

Outlandish does not follow the standard top-down structure of the average company – but it does have a loose hierarchy.

There are nine official members of the tech co-op with a legal vote over company decisions. In order to become a part of this inner-circle, a person has to have worked with the company for a year.

Outside this circle are “Outlanders” – workers such as Polly who have been at the firm for three months that are given votes on company decisions, but do not have a legal vote.

This means they may not get the final say on particularly contentious decisions that members enjoy.

“Freelancers aren’t invited to vote on company decisions, however they are invited to join a circle,” says Polly.

The circle system is part of the “sociocracy” system – a philosophy of management and governance that is supposed to improve communication between teams while devolving decisions and responsibility.

Polly explains that a circle is “effectively a working team” made up of people focused on one area of the business.

“Within a circle, an individual can bring forward a proposal and get the opportunity to discuss it with everybody,” says Polly.

“Usually they’ll have a discussion then bring forward a proposal and it will go around in a circle.”

The proposal – which could put forward anything from a project to a party – is then ironed out by the circle and only passes when the group votes unanimously in favour or is happy to abstain.

It will then be up to the proposer to take responsibility for whatever project or event they have put forward.

“We’re trying to brand ourselves as the alternative, decent tech industry,” says Polly.

“We don’t like the idea that somebody who’s at the top of the organisation – who maybe started the organisation and maybe they do have their roots in being a developer – by the time they get to the top they may be very disconnected from people actually doing work.

“The reason we work as a co-op and the reason we think these circles and constant conversation is good, is because you have the power to change our working practices.

“You are actively encouraged to be influencing the future of the company and take responsibility.”

Outlandish has an asset-locked model – meaning members and “Outlanders” get to vote on how any surplus is spent.

“We try to make that about 20% of our fee, which gets spent on various things,” says Polly.

“One time people put forward a proposal to spend it on a year’s supply of biscuits. We did that, but unfortunately all the biscuits went out within three months.”

According to her, about £100,000 of surplus cash went into funding proposals for pro-bono work on behalf of charities and other organisations last year.

Polly explains: “We don’t just hand over money to charities. What we do is we pay ourselves or other developers to build web projects for them.”

When it comes to paying staff, workers at Outlandish are paid on a scale ranging from £125 a day to £375 a day, while some outside freelancers are paid above that scale, because they either have skills Outlandish desperately need or only work a couple of days a week.

‘We wouldn’t work with an arms dealer’

There are co-operatives inside and outside the tech industry that take a radical approach on what projects they work on.

Several co-ops will only work with other co-ops as an act of radical political protest against private companies.

“We’re pretty keen to work with companies, because we like to work with progressive companies and support them and talk to them about how we work in the hope some of that will rub off on them,” says Polly.

“We also think it is very valuable to take money out of the private sector and put it into the co-operative sector.”

Although it is more than happy to work with private sector firms, Outlandish does take a stand against some industries.

Polly spells it out plain and simply: “We wouldn’t work with an arms dealer.

Although its unconventional structure may raise an eyebrow, the company has worked for a few household names – including the Labour Party leader and local MP Jeremy Corbyn.

Outlandish, which is based in the opposition leader’s Islington North constituency, worked on the website for his campaign during the snap election called by Prime Minister Theresa May last year.

The tech co-op also invited Corbyn to its offices for lunch and photo-op in February this year.

On top of its work for the Labour Party leader, Outlandish has also developed tools for charities on a pro-bono basis.

“One of our developers had a project in mind which involved him pitching £5,000 from the members, and that was when the government was looking at how to restructure its funding for UK schools,” says Polly.

“What he did was he just looked at London and got all the data on the schools – geographic location and how funding would be affected by this formula.

“He then built a simple prototype of a website where you put in your postcode, it shows you your local school and the site tells you it’s going to lose X amount of money as equivalent to Y amount of teachers or support staff.”

The tool was then backed by the National Union of Teachers, which wanted to make the School Cuts map national in scale and put it a the centre of a campaign.

The tech co-ops took data on access to clean water stored in thousands of .csv files and created a clear picture of what areas had the worst water sanitation.

“We did most of the the data tools and Agile Collective built the website,” says Polly.

“You can go on and it’s a geographical map where you can build your own graphs within the map depending on what indexes you’re looking at.

“The resource was like to go-to place for aid organisations and researchers looking at where to put their money and how to work.”