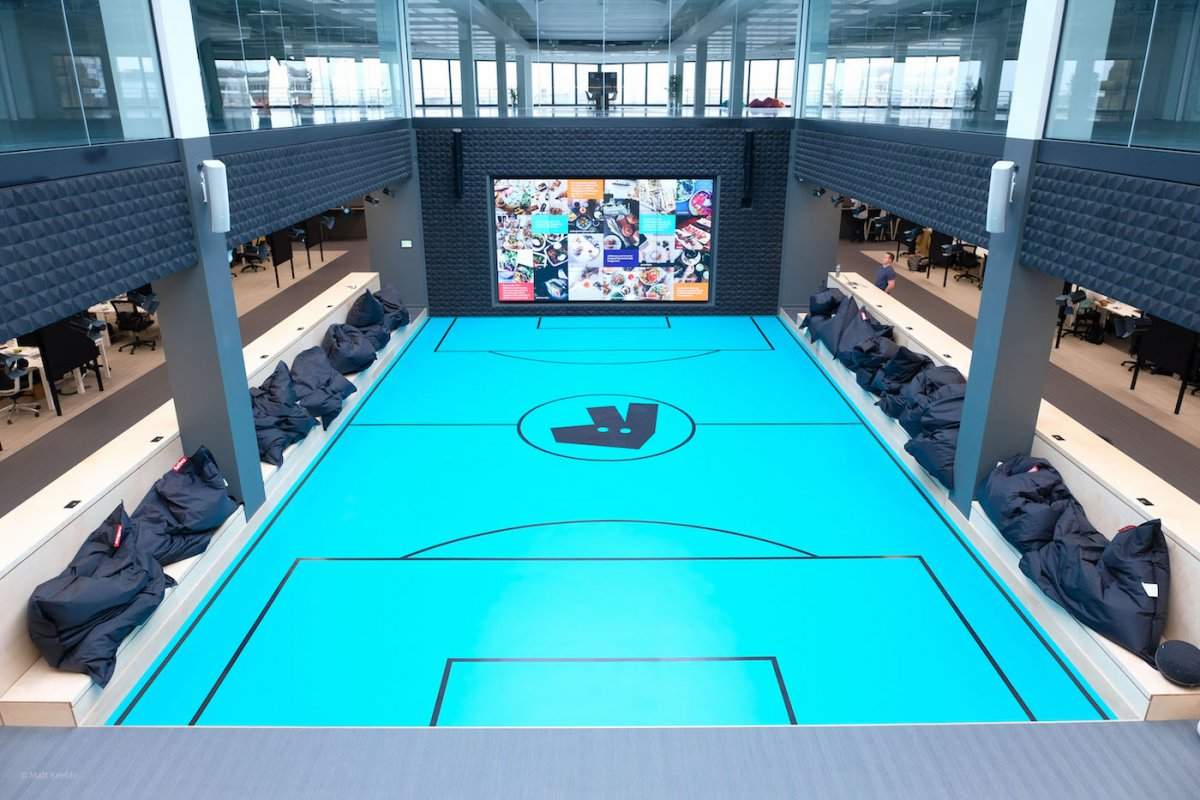 Deliveroo, Amazon and Missguided are some of the companies equipping modern offices with exciting features ranging from the fun to the ridiculous as bosses realise positive staff morale equates to high productivity

From beer fridges and ping-pong tables to DJ decks and segway tracks, workplaces are a lot more fun than they used to be.

More and more businesses are packing their offices with exciting features to keep morale high among staff who will spend an average of 90,000 hours at work in their lifetime.

The importance of a happy, stress-free workforce isn’t difficult to comprehend, as economists at the University of Warwick found it made employees 12% more productive – while unhappy workers were 10% less productive.

Companies are now investing in an environment that enables staff to carry out their daily duties contentedly and efficiently, leading to mod-cons like selfie light tunnels, hammocks, saunas and yoga studios.

We look at some of the coolest offices in Britain.

Since It was founded in 2011, it has grown rapidly to reach more than 10 million student members worldwide and now has offices in global cities including London, New York and Sydney, employing 250 people.

UNiDAYS’ 25,000 sq ft office, based within a former lace mill, offers a fresh take on art and culture.

It features a gallery space with images taken by its in-house global photography club, while staff can take time out on a treehouse-style mezzanine floor with bean bags and a cargo net hammock.

There are also soundproofed phone booths, standing desks, DJ decks and an Xbox in one of the two kitchens, as well as an arcade machine and ping-pong tables.

The company has attracted regular national recognition, from being ranked ninth in The Sunday Times Hiscox Tech Track list 100 in 2016 to topping The Sunday Times Lloyds SME Export Track 100 earlier this year after trebling international sales.

Founder and CEO Josh Rathour was also named by EY as both Midlands entrepreneur of the year and the UK’s rising star in 2017.

The fashion retailer opened its four-storey headquarters in Manchester, just a short walk from Manchester United’s Old Trafford stadium, in November 2015 – and has since been compared to the bedroom of a fashion student.

Owned by Nitin Passi, Missguided employs about 300 people and was previously named as one of the best up-and-coming businesses in The Sunday Times Virgin Fast Track 100 league table of 2014.

Interiors at the headquarters include neon lights every with messages and slogans of encouragement, such as “don’t make sense, make dollars” and “started from the bottom, now we are here”.

There’s also unicorn wall hangings, a Chinese blossom tree in the middle of the floor and champagne taps – offering a vibrant and exciting work environment.

The online electrical appliances retailer, which was previously known as Appliances Online when it was founded by John Roberts in 2000, is located in Bolton and has more than 1,000 employees between its six floors.

Employees get on-site pamper pads they can use during work hours.

Not only that, but AO allows staff to use a nail and hair salon, and relaxing massage room – while there’s an on-site Starbucks, too.

Spa facilities can be used during the working day because management believe personal time should be spent with friends and family.

It has a canteen with pool and ping-pong tables, a Lego meeting room and collaboration areas where employees can write on the walls.

Staff are also treated to a free healthy breakfast every morning.

Situated between London’s Shoreditch and the City – Amazon’s latest office can be found at Principal Place, in Worship Street – it has been described as a hipster haven.

The retail giant is based in a 15-floor, 600,000 sq ft office, which houses over 1,000 employees and features several cafes, restaurants and kitchens equipped with sandwich makers and coffee machines.

Adjustable sitting and standing desks for all staff are also available

The original architect sketches also include plans for the building to have a tennis court, a basketball court and a swimming pool – which are yet to be built.

There is, however, an open plan kitchen, industrial lighting, lockers for employees to collect their Amazon parcels and extensive roof gardens.

Amazon also offers an organic supermarket and boutique gym – which are also open to the general public.

The Estonian-founded company gives employees at its Shoreditch headquarters the chance to get around the office using scooters, have a rest on its many hammocks and enjoy some R&R in the sauna.

Taavet Hinrikus, founder and chief executive of TransferWise, says the aim of his firm’s offices around the world is to “create an environment for people to do their best work”.

As well as offering its 60 staff private health insurance, duvet days, free fruit and drinks and flexible working – the office environment is also something to shout about.

It comes kitted with a bar, yoga studio, reading room and – for that extra fun factor – it has a fireman’s pole, hot air balloons and pink phone box.

And when a new member joins the team, a giant tree in the middle of the floors lights up to welcome them to the team.

Itison offers deals for premium brands and unique experiences, including its Itison Drive-in Movie events across the country and the chance to have lunch with A-listers like Leonardo Di Caprio and George Clooney.

London-based food delivery service Deliveroo moved into its current office in 2017  – and complimentary food, flexible working and employee discounts are just some of the company benefits.

Each of its 27 meeting rooms is named after a client, while the office boasts an on-site gym, shared rooftop, quiet zones with swing-like chairs, pool table, phone booths that employees can use for some privacy, a caffeine bar fully equipped with Nespresso machines and a centre court meeting space where larger team meetings are held.

The 55,000 sq ft office, which has room for almost 1,000 staff, is based in the heart of London overlooking the River Thames.

Who said accountancy is a boring profession? PKF Cooper Parry is proving that’s not the case with one of the most creative corporate offices going.

Nicknamed “Parrydise” due to its relaxed and bright interior, its office in Solihull features colourful lights, a Segway and running track, swings, sports bar, themed meeting rooms and a “Narnia cupboard”.

The company, which employs almost 500 staff in total, wanted to up the ante after installing gaming areas and an astro-turfed TV viewing area at its head office next to East Midlands Airport, in Leicestershire.

The fun environment helped PKF be named the 12th best place to work in the UK in The Sunday Times “Best Companies to Work For” list in February and ranked in the top 10 of the UK’s “Coolest Offices” list by careers service Adzuna last year.

She says: “A happy workforce is a productive one.”