Hatton Garden heist: First-hand accounts of the people who worked next to scene of UK’s ‘largest robbery’

Four years on from the Hatton Garden heist - a burglary that's been called "the largest in the history of English law" - James Walker speaks with workers in the area about the heist aftermath and King of Thieves, a film about the burglary starring Sir Michael Caine and Ray Winstone 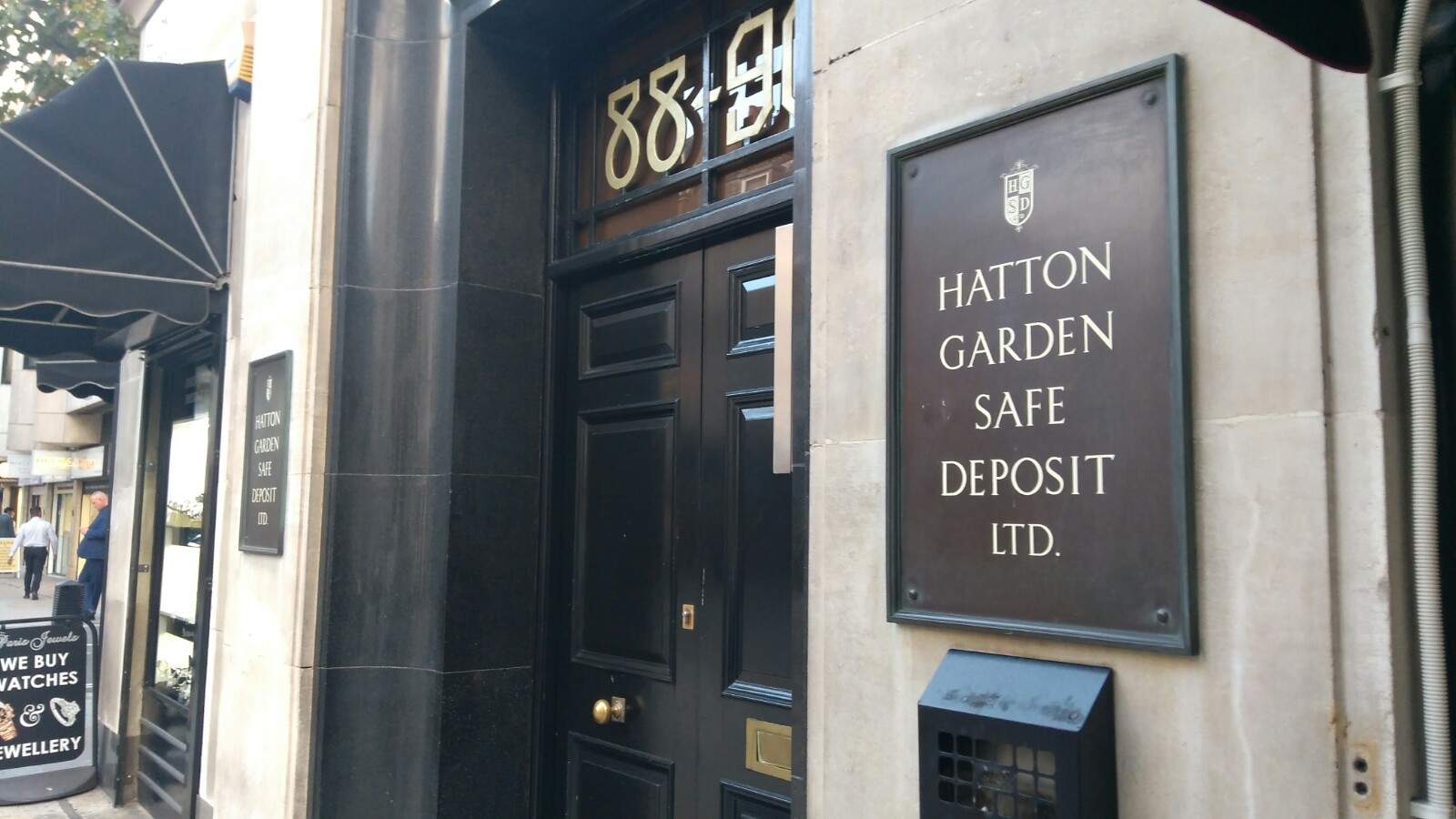 On the evening of 2 April 2015, a gang of elderly men carried out the Hatton Garden safe deposit burglary in London, stealing valuables worth up to £25m. In September 2018, when a major film, King of Thieves, was released to tell the story of the heist, James Walker spoke to people in the area

It was the talk of London, Britain and the world over, but news hadn’t filtered through to Jean Gertner about the Hatton Garden heist on her doorstep.

Despite working at her partner’s jewellery shop on the same street, she wasn’t aware that one of the UK’s biggest burglaries had taken place over the 2015 Easter bank holiday weekend.

Jean spent two weeks fearing for her valuables stashed away in two boxes at Hatton Garden Safe Deposit Company – the underground safe deposit unit that was the target of the £25m heist, now being told in a major new film starring Michael Caine and Ray Winstone.

“I was working as usual that Easter period,” says the 66-year-old, who has worked in Hatton Garden for 20 years. “It was on Good Friday, Sunday and Monday, and I knew absolutely nothing about it.

“Yet I had two boxes in the same safety deposit facility which, thank god, were not touched.

“All I can recall is when they discovered what had happened, there were policemen sitting on the ground floor and they looked very nervous.

“We were going there, concerned about what had happened to our boxes, and that’s when I saw them looking very red, sweating and nervous.

“It took them two weeks to let me know what had happened to my boxes. They still had to tidy up and clean everything that was going down.”

Jean could breathe the heaviest sighs of relief when she was finally told her safe deposit boxes were not among the 73 that he been cracked open by the burglars.

“I was surprised, but I was very happy of course,” says Jean, who won’t reveal what the prized possessions she had stored away were.

“Some people told me they had millions. I didn’t have millions, but every pound counts.

“You put it in a safety deposit for a reason – it’s not there to be given away to anybody.”

The street named after Elizabeth I courtier Sir Christopher Hatton is the crown jewel of the British diamond trade, having once featured actual gardens that attracted visitors.

Different versions of history are given about when Hatton Garden begun to focus on jewellery businesses.

Gary Williams, chairman of Hatton Garden Business Improvement District (BID), claims the area had been the centre of the UK jewellery trade since medieval times in hos organisation’s 2016/17 annual report.

Other sources have pegged the beginning of its diamond dominance to the 19th century – particularly after the colonialist discovery of the Kimberley diamond fields in South Africa.

Fast-forward more than 100 years, and the gem of the British jewellery industry is home to about 50 jewellery shops and many more connected businesses.

It was a community that was shocked by the Hatton Garden heist.

Over the course of two nights during the Easter bank holiday weekend in 2015, a heist team aged from their 40s to 70s – given the nickname “diamond wheezers” by UK tabloids – drilled their way into the Hatton Garden Safe Deposit vault located at 88-90 Hatton Garden.

While many nearby businesses were closed, the gang crawled through a hole measuring just 25cm high and 45cm wide.

They went on to crack open 73 boxes in the vault and made off with jewels, gold, precious stones, cash and other goods.

Initial estimates placed the value of these items at £14m, although there were some suggestions at the time the sum was closer to £200m early on and a court in 2017 said they were worth £25m.

It wasn’t the first high-profile robbery to take place on the jewel-encrusted street.

Graff’s workshop was the victim of thieves who made off with £7m worth of jewels in 1993 – stealing one diamond that was reportedly worth £2m alone.

Despite not being a first for Hatton Garden, the heist was by far the largest – even being labelled the “largest burglary in English legal history” and the 21st century’s answer to the famous Great Train Robbery in 1963.

When the ransacking of the vault was discovered, police swarmed the area outside 88-90 Hatton Garden.

As the sum of the stolen goods became clear, national and local media followed suit.

Keith Boss, a 66-year-old window cleaner who has been scrubbing shop fronts on Hatton Garden for 45 years, recalls: “There was a lot of media.

“What the burglars did was unbelievable. Was it clever? I don’t know whether that’s the right word – I’d say it was under-security.”

Much like Jean Gertner, not everyone in the area was aware of what had happened until police and journalists showed up in force.

One such person was Creed Smith, assistant manager of jewellery-making equipment supplier Bellore Rashbel, based a few doors down from 88-90 Hatton Garden.

“We had an office on the third floor, but the first time we heard about it was the next morning when all the police arrived,” he says. “We only knew as much as anybody else around the area.”

Fortunately, Creed says none of the jewellers his company worked with were put out of business as a result of the Hatton Garden heist.

“We expected to have one or two customers,” he says. “But from what I hear, most of the people who had their safe deposit boxes were foreign or were people not necessarily connected to Hatton Garden.”

David Clark echoes the image of a community going about its business despite the blockbuster crime.

He sells jacket potatoes from a stall on Leather Lane – a market street packed with vendors flogging food from around the globe that runs parallel to Hatton Garden.

Asked if he noticed much change in the area, David, who has worked in the area for about 25 years, says: “There was nothing at all really. No big song and dance.

“You come to work, you get on with it. There’s lots going on in the world. Someone’s had a load of stuff nicked, people seem to have been arrested for it.

“Hatton Garden, for all intents and purposes, could be a million miles away from here. Although it runs parallel, the two streets very rarely collide or connect.”

The sensational sums and age of the burglars involved in the Hatton Garden heist were always going to draw the eye of a film industry on the hunt for the best “stranger than fiction” stories.

Last year, The Hatton Garden Job was released to little acclaim and fanfare.

But the movie’s comical tone has led to it facing criticism from the jewellery industry before its release this week.

Speaking to The Telegraph, London Diamond Bourse treasurer David Joffe said: “I don’t think there are any gentleman robbers and I certainly wouldn’t call any robbers heroes.

“Unfortunately, these films glorify such things. I wouldn’t want them made in the first place – it gives robbers credence. The victims are very annoyed about it.”

Such feelings about the Hatton Garden heist flick are not universal within the area, though.

“There is a lot of hype for us around here because it’s an area we’ve worked in for a while and we love, so it will be nice to see it on the big screen,” says Creed.

How does he feel about the comical edge to the characters? “The original guys weren’t Robin Hood,” he says.

“But Hollywood has got to make it more palatable for the general public, and Michael Caine is a celebrated British star.

“I don’t think it would be right for people to see him in a darker light.”

Hatton Garden window cleaner Keith is eager to see if the film is up to scratch with his knowledge of the heist.

He says: “I want to see more of what’s happened because all I know is that somebody got down there and cleared it, and a lot of people will have lost a lot of stuff.”

Keith also doesn’t seem too bothered about the “diamond wheezers” being comical characters in King of Thieves.

“They never hurt anybody did they?” he adds. “Do I approve of them doing it? No. But, I do admire their guts to do it.”

Hatton Garden safe deposit burglary: The convicted and the accused

They were convicted and handed sentences less than a year after the burglary took place. One man arrested in connection with the heist is still awaiting trial.