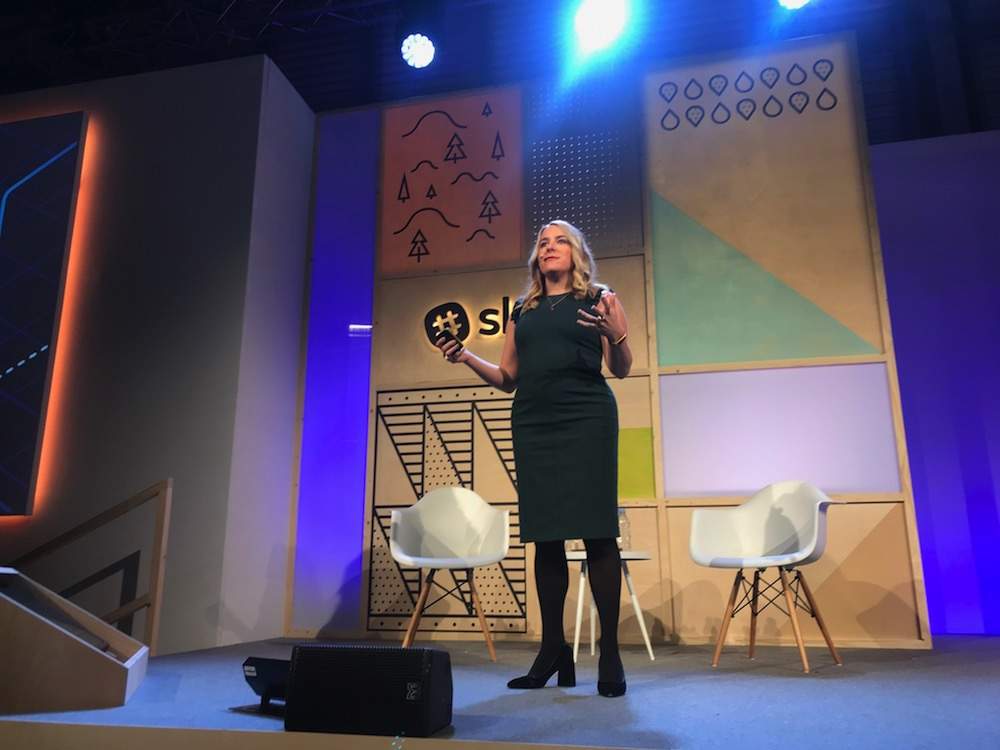 Encouraging teamwork between departments in a large organisation can be challenging but workplace collaboration tools can bring big benefits to company performance.

She said: “The ability to work on shared goals can be a company’s greatest asset”.

Slack is an online collaboration hub that features conversation channels to help organise work flows and keep relevant files, chats and people in a single place.

It works in a similar way to group chats in other messenger systems but the ability to integrate it with existing business applications gives it the edge over many of its competitors.

Created in 2009, the software has been called the fastest-growing business app of all time and has more than eight million active daily users – with 63% of the FTSE 100 companies integrating Slack into their workflow.

Speaking at the Slack Frontiers conference in London, Ms Underwood said: “We are a truly neutral platform and we seek to be the true collaboration platform for teams today.”

Nigel Miller, SVP for broadcast operations for Europe and Africa at Fox Networks Group – 21st Century Fox’s primary operating unit for television distribution – describes his role as one of the most complex in the organisation as it covers a geographically diverse team across 25 different countries.

He said: “Slack allows us to have constant open channels and gives us the agility to make sure content arrives on time with no errors.

“Other tools start with direct messaging and then move to team – Slack was team-first and, because it was born out of that, it makes it a more useful tool.”

It is used across departments, meaning that production and design are able to integrate with marketing and sales, synchronistically and no matter where the teams are based.

One of the more logistically challenging events that Fox covered was the FIFA World Cup 2018 in Russia.

The broadcaster’s coverage involved collaboration between teams in LA, New York and Russia.

One example Mr Miller gave in which workplace collaboration tools were used was in creating a video clip of the penalty shoot-out between England and Columbia.

Through Slack, the team in Russia were able to upload a video of England midfielder Eric Dier scoring the winning penalty.

A second team in the US was then able to edit the video to a size suitable to be shared on social media, while a separate social media team drafted a tweet.

The tweet was able to get approval from a manager who was overlooking the process on Slack and was then shared with fans across the world.

Fox said it was able to take “this exciting final goal from the pitch through editors and to fans in under 90 seconds”.

Similarly, when streaming live reaction to the match, producers were able to share an image of any equipment that was not working correctly and alert a technician to solve the issue remotely, via Slack, and re-establish the live stream.

Fox described the World Cup as a “huge success”, and achieved double its engagement target and 558 million video views.

Workplace collaboration tools used by every employee at Monzo

Challenger bank Monzo is another company that is realising the benefits of collaboration through Slack.

The start-up has 500 employees and recently broke the one million customer barrier.

“We’ve been using Slack since day one and love it,” explained head of business operations William Stolerman.

“One of our core operating principles is to ‘default to transparency’, which would be much tougher to live by without Slack because it’s so easy to work in public channels.”

Monzo CTO Meri Williams added: “Everything is open by default and we always use a public channel unless there is a very good reason not to.”

She explained that Monzo held a weekly Q&A session with someone from the executive board on Slack, where they discuss what the future plans are and why they are doing them.

Ms Williams added: “It allows people to be aligned on what the company is doing.”

How WeWork is using Slack as a workplace collaboration tool

With the ability to instantly collaborate through Slack, WeWork was able to take the process of finding real estate, designing and building the office space from the industry standard of 18 months to under six months.

As a result, the company has reported a 53% growth in membership and doubled the number of locations it has worldwide.