No longer just a booking platform, Trainline is now at the forefront of using cutting-edge technology like AI, machine learning and natural language processing to predict train prices, provide travel updates and offer e-tickets. Chief technology officer Mark Holt explains to Dan Robinson how the journey has only just begun 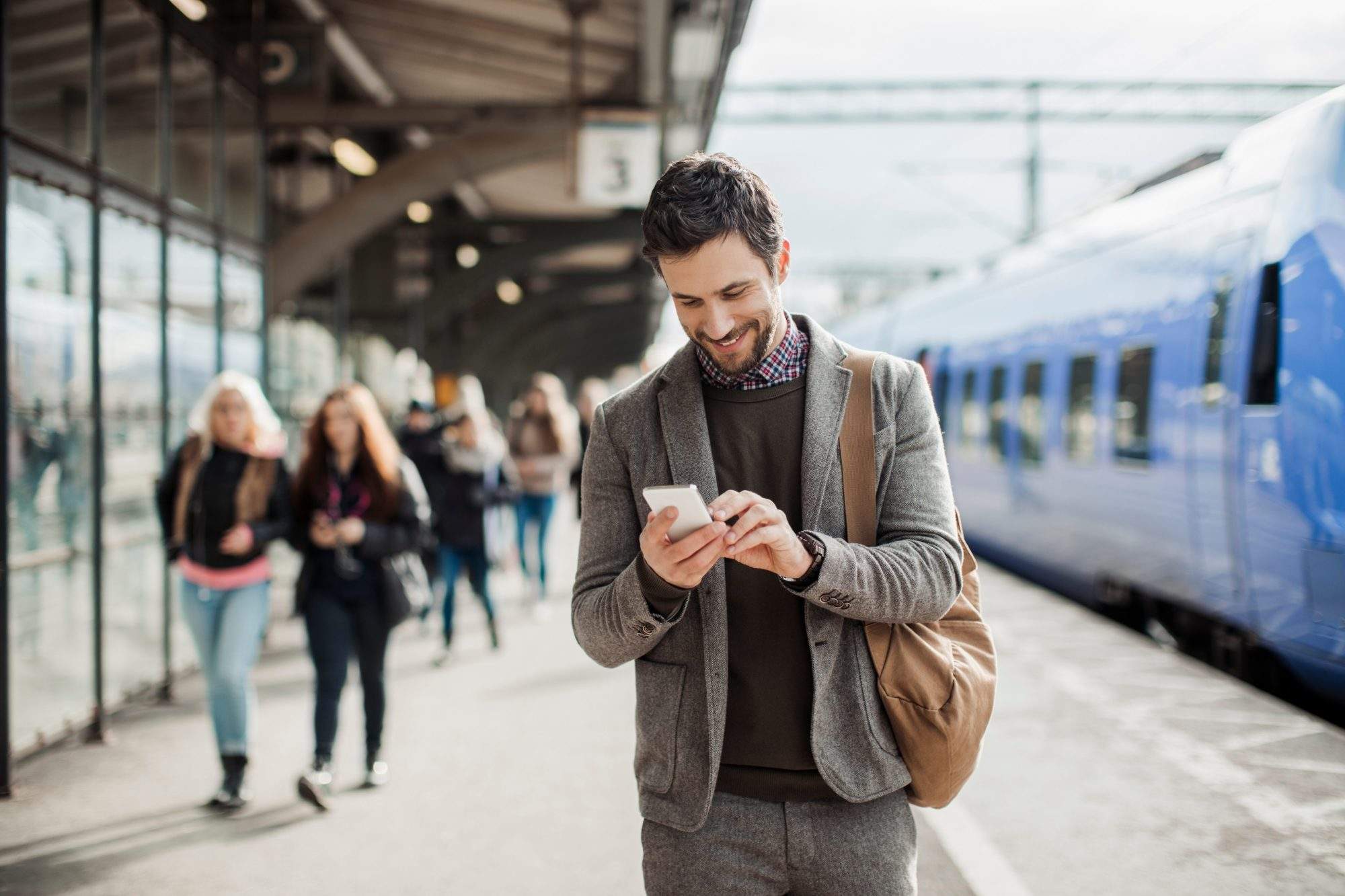 “When was the last time you used a paper ticket to get on a plane?” asks Mark Holt.

Sure, there will still be plenty of air passengers who prefer to print off everything they need for a holiday, but a rapidly growing number are now taking the convenient route of holding their mobile phone against a scanner to pass through security gates.

Compared to air travel, rail has lagged behind in terms of technology until the past few years.

Mark’s company Trainline only began offering e-tickets as a trial with a select number of train operators two years years ago but now almost every company offers the service.

Still, some frequent passengers are surprised it’s even a possibility.

“A friend of mine used an e-ticket for the first time recently and was blown away,” says chief technology officer Mark.

“He’d been using it for so long when flying but it never occurred to him he could do the same thing with his phone when he gets a train.”

Trainline, set up in 1997 and previously known as TheTrainline.com, has traditionally been regarded as a booking platform for trains and, more recently, coaches.

But it is now pushing to be recognised as a technology business – and a leading one at that – as it releases a stream of new applications and innovations.

In its most basic sense, the company’s app is at the centre of its operation – with more than three-quarters of all online traffic coming through its mobile platforms to make bookings – but more advanced tech is beginning to be introduced.

This ranges from price prediction to delay alerts, while AI is becoming an increasingly prevalent piece of the jigsaw.

“We rely on technology for all our interactions and all our users,” says Mark. “The app is our key channel and it contains a huge amount of innovation.

“It’s far and away Europe’s best train booking application on mobile, and we continue to improve it as much as we possibly can.

“One of the things we look to do is optimise the customer experience, making it simpler and simpler to ride on the train.

“We’re trying to make it a magic carpet ride where Trainline whisks you from one end to the other.”

Electronic ticketing was ran as a pilot in 2016 with a handful of operators, including Virgin Trains West Coast, in what Trainline called a “bold step into a new era” at the time – despite admitting the rail industry was behind other modes of transport such as airlines, the tube and even buses.

While it had already offered “print your own” barcode-based tickets for about eight years before that and mobile app-based barcode tickets for the previous five years, this was the first time the required scanning technology to read specific advance tickets was available to be rolled out widely.

E-tickets also have security features to avoid fraudulent use by passengers, such as being locked on to an app, ticket activation buttons and a visual security dynamic “watermark”.

Since the initial trial, the technology has continually expanded to more operators across the UK and Europe, and more than half the tickets sold by Trainline now are e-tickets.

“Pretty much every journey people want to take is available by mobile ticket now,” says Mark.

“That gives us the ability to make the experience better.”

The price prediction software recently introduced to the app using artificial intelligence (AI) and machine learning is one of the innovations Mark is particularly proud about.

Search results for advanced tickets (in single journeys, not return) now include a price tracker that shows how prices are expected to increase over time until the day of travel – meaning users know the best times to book.

The engine is powered by data using historical pricing trends from billions of journey searches, and Trainline claims it has already saved customers more than £9m.

Mark explains: “A big part of what we do is about creating a personalised experience. One of our advantages is the huge amount of data we have.

“People think of us as a bit of a start-up but we’re 21 years old now so we have great data assets about people’s travel, including where they travel from and to.”

When waiting for a train and without a reserved seat, Trainline also employs a “BusyBot” to crowdsource information so it can tell passengers which carriages are most likely to have available seats.

Natural language processing is another channel the company is exploring, with customers able to input keywords and questions like “commute to work” and “travel alert” to find out live journey information.

The bot can then analyse data on rail disruptions collected from Twitter feeds, and the AI matches the information to individual user journeys.

The same process can be carried out through voice recognition, having already teamed up with the Google Assistant to pass this information on by asking a question out loud.

It does have its limitations, though, according to Mark, who says: “There’s a big opportunity for us with voice chat but I’m not convinced we’re really there yet for commerce through a chat interface.

“People aren’t really paying for stuff through Alexa or the Google Assistant.

“But if you say to Google Home ‘is my train on time?’ it will tell you the last three have been running on time so your train is estimated to be on time too.

“We’re also trying to leverage the natural language processing and recognition technology in other ways, so you can tell your phone to process a refund and it’ll automatically arrange that.”

Trainline on the future of train travel

It’s not just trains, however, with coaches an increasingly important part of the service offered by Trainline – 81 of its 183 partner companies are coach operators, such as National Express in the UK.

Mark admits to being “staggered” by the number of people booking this more affordable but longer form of transport, saying: “For students or people who’d happily take longer to get somewhere, it’s a good way of saving a lot of money.

“That multi-modality is really interesting. It will become more and more seamless.

“Across Europe, it’s really easy to travel across different operators and we can do this for you by helping you take part of a journey using one form of transport and then another carrier for the rest of it.

“Door-to-door travel is going to be even more interesting in the future, where we are working out how to get you from your office in London to a specific office that’s 10 miles outside Manchester.”

Mark believes Trainline will be able to book taxis one day, claiming its web and app platforms get more traffic on weekdays than Uber – which is busier on a weekend.

Overall, Trainline is visited by 60 million visitors every month and it aims to grow its customer base by expanding into new territories.

While Europe has been its primary market until now, with operations in 36 countries, the company entered into Asia in February when it began selling Japan Rail passes.

Mark says: “We’re trying to open up globally and want every journey across the world to be one you can take through Trainline.

“I don’t believe there’s anything as cool as our technology. There’s nothing else that would be able to book you a train from Manchester to London, a Eurostar to Paris, and then a train to Lyon in a single transaction.

“And nothing else has all the advanced features using AI, machine learning and natural language processing that we have, so we’re by far the market leaders in this space.”

Trainline didn’t get to the point where it’s on the cusp of world dominance by accident, of course.

Set up in 1997 and launching online ticket sales in 1999, the company was once part of Virgin Group before transferring to private equity investors and management.

Since snapping up its main online competitor Qjump from National Express in 2004, it has been on a rapid expansion driven by further acquisitions, organic growth and new technology.

The team now stands at 600 staff, mainly based at the headquarters in Holborn, London, and other offices in Paris – which is responsible for connecting the world’s different transport carriers into one seamless service – and Edinburgh.

Mark says the company has worked hard to be an active member of the thriving London tech scene by hosting meet-ups and encouraging staff to attend and speak at conferences to help move the industry forward.

“You have to be out there,” says Mark. “Companies who aren’t telling their story and explaining what they’ve done and learned is a huge mistake.

“We see value in being an active part of the tech scene both as an employer and a prospective employer.”

Part of this is about finding the right talent, no small feat when you share a city with just about every giant of the tech industry.

It’s not just about having the best engineers and software developers, but creating a diverse workplace.

This is something recognised by a management team led by CEO Clare Gilmartin, a keen advocate of women in tech, and reflected in a workforce that features 48 nationalities.

Mark adds: “We work really hard to promote diversity in technology and the image we’re projecting is obviously paying off.

“We’ll get people who will tell us that three years ago, we offered them a job and they weren’t interested, but now they want to be part of what we’re doing.

“No one wants to spend their life fighting with infrastructure or in long meetings, so we bring in the best people and give them the autonomy to create the best product they can.

“The talent is definitely here in London but retaining is difficult because while we’re very good at recruiting the top echelons of talent, we’re competing with the likes of Google and Facebook to keep them.”

183: Number of train and coach companies for which Trainline sells tickets – split 102 and 81 respectively

36: Countries in Europe in which customers can travel by booking with Trainline – plus Japan

173: Number of nationalities of people who use the platform – which has 16 localised websites in 14 languages

127,000: Journeys made every day using Trainline

77%: Number of visits through mobile devices

600: Employees, consisting of 48 nationalities, including more than 300 travel tech specialists and engineers