Zimbabwe’s hyperinflation: How the former breadbasket of Africa lost all its money

As the general elections take place in what used to be one of Africa's most stable economies, Dorothy Musariri takes a look at Zimbabwe's hyperinflation programme, which led to the country's bankruptcy under former dictator Robert Mugabe 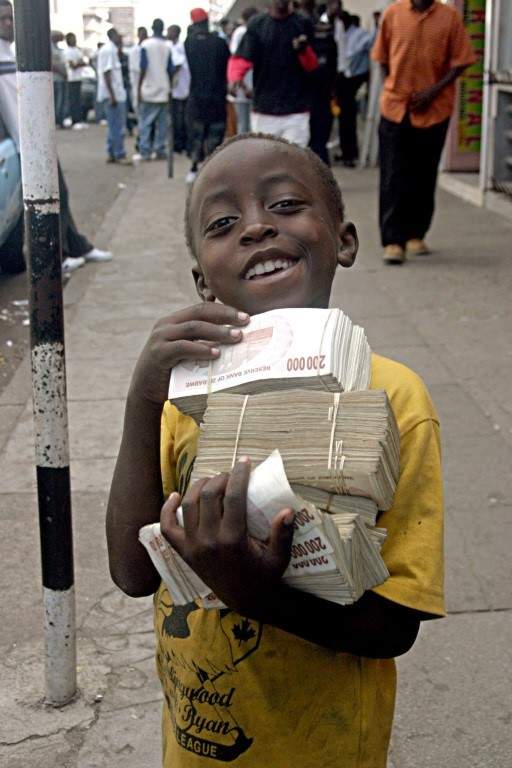 Having rid itself of a dictator and now gearing up for its first free and fair election in almost four decades, Zimbabwe is turning a corner – but due to its former hyperinflation economic programme, the nation remains a work in progress.

Zimbabwe’s hyperinflation – which at one point meant a loaf of bread cost 10m Zimbabwean dollars – ended the country’s dollar almost 10 years ago.

Since then, it has depended on the US dollar and other currencies to manage what’s left of its businesses.

A country that was once regarded as “the breadbasket of Africa” was taken over by corruption, which led to its crazy economic policies and eventual bankruptcy under former dictator Robert Mugabe – leading to its more recent reputation as a “basket case”.

Mugabe is now gone, however, after being forcefully ousted last year to bring a tenure that began when the country won independence in 1980 to an end, and Zimbabwe will now decide who is next in line for the presidency in an election today.

Zimbabweans will hope the winner can steer the country towards a brighter and more prosperous future, having gone from being one of the wealthiest in Africa to suffering from cash, food and water shortages in the space of a two decades.

Before 1980, Zimbabwe was known as the “breadbasket” of the 14-member Southern African Development Community due to its self-sustainable economy underpinned by its production of maize, cotton, tobacco, roses and sugarcane.

When Mugabe took control following the UK’s decision to grant the country formerly known as Rhodesia independence, it provided an opportunity to glow in the African economy.

Bu the dictator’s policies led to the destabilisation of the economy, starting in the late 1990s.

In 2005 the Zimbabwean government began a campaign to forcibly remove some 4,000 white-owned farms from their businesses, which destroyed the country’s export business.

This was part of the Fast-Track Land Reform Programme in 2001, which meant its share of maize production on the continent never increased above an average of 2% between 2001 and 2016 turning it into a net importer.

Today, around 95% of the country is jobless.

As a result, the country of 16 million saw as many as three million people go into exile – with most people fleeing to surrounding countries such as South Africa, Zambia, Botswana and Mozambique.

From 1999 to 2009, Zimbabwe’s hyperinflation model was in full flow following the confiscation of private farms from landowner.

One trillion dollar notes were issued among the countless new money the country printed.

In 2009, Mugabe’s government stopped its use of the Zimbabwean dollar and converted to a multi-currency system following hyperinflation.

Mugabe’s government went on to create bond notes in May 2016 as a way to combat the shortage of US dollars – the main currency the country has been using since the conversion.

This meant that a $1 bond note was equal in value to a $1, but in reality it is exchanged for much less on the black market.

The new MDC candidate Chamisa says he plans to get rid of the bond note if he wins the presidential elections because he doesn’t agree with its use.

Zimbabwe’s hyperinflation: What happened to the diamonds?

In 2007, Zimbabwe made the largest diamond discovery in recent history – an industry that could have generated $2bn a year in revenue.

Zimbabwe joined the list of the top five countries globally to produce diamonds, alongside Russia, Democratic Republic of Congo and Botswana.

It was a chance to revive its declining economy, unemployment rate and collapsing infrastructure.

But an AFP report later found that a mining firm Mbada Diamonds had looted the diamonds.

A few years later, Zimbabwe’s finance minister Patrick Chinamasa said in his 2016 budget statement: “There was a greater economic impact from diamonds during times of uncontrolled alluvial panning than through formal diamond mining arrangements.”

Zimbabwe’s hyperinflation: What’s next for the Southern African country?

In a country that once had huge potential, so much has happened it’s not surprising that investors are still wary.

But that hasn’t stopped some companies.

As a new government comes into power, more businesses are willing to invest in the nation as they hope for a new and open approach to foreign companies.

A company that seems to more open to doing business with Zimbabwe is Chinese firm Tsingshan.

It reportedly signed a $1bn deal in May 2018 to build a 400 megawatts coal methane-fired power plant in Matabeleland North Province.

This could create up to 25,000 jobs and would be implemented in phases.

Another company adding to an investment that was already there is steel manufacturing company Moti Group.

It is preparing to double its investments in the Southern African country to $500m after the removal of Mugabe.

It already had investments around $250m to date, mainly in mining.

Finance minister Patrick Chinamasa believes the country’s economy could increase by 6% under new leadership, an increase from the previously predicted 4.5%.

A Reuters investigation in September 2017 found that documents indicated Mnangagwa had planned to return land lost by the 4,500 white farmers to them in a bid to revive the agriculture industry.

He says he wants white farmers to come back into a “positive role.”

This could also add the country’s failing economy and help re-build Zimbabwe, which reached out to the International Monetary Fund (IMF) and the World Bank to request for loans.

The IMF said it won’t assist until they start holding free, fair and credible elections.

In November 2017, IMF spokesperson Gerry Rice told a news briefing that the bank “will update our assessment of Zimbabwe’s fiscal position, foreign exchange developments and inquire about the new administration’s economic plans”.

A positive step, which could mean more investors coming forward and possibly making Zimbabwe’s hyperinflation and corruption a distant memory and turn it into Africa’s breadbasket once again.