Nottingham's carbon-neutral plans include expanding public transport powered by renewables, installing solar panels on homes and reducing the number of cars on its roads 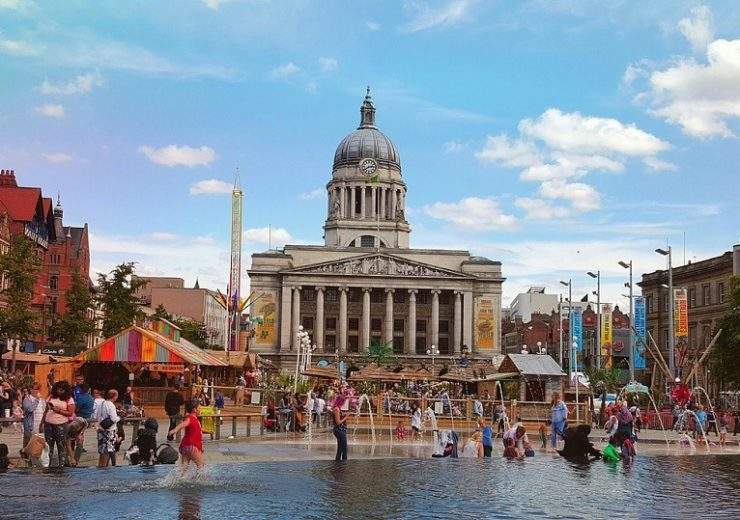 Nottingham has launched an ambitious policy as green as Robin Hood’s famous tights in a bid to become the UK’s first carbon-neutral city by 2028.

The East Midlands city – home to the legendary outlaw – hopes it can achieve net zero carbon dioxide emissions through a mix of expanding public transport powered by renewables, installing solar panels on homes and reducing the number of cars on its roads.

Nottingham City Council says it has already achieved its 2020 Energy Strategy, which set out to make a 26% reduction in emissions by the end of next year, while it has cut pollution by 39% since 2005.

It claims to also be on track to meet a 2020 target of generating 20% of its energy from low-carbon sources after reducing the city’s energy demand and growing its renewable energy projects.

Councillor Sally Longford, portfolio holder for energy and environment, said: “We have been making good progress for a long time, but it is incumbent on us to do more.”

What has Nottingham already done to become climate-neutral city?

The city council has carried out a number of projects aimed at improving Nottingham’s green credentials.

Its electric bus fleet is said to be one of the largest in Europe, while it has also invested in biogas and retrofitted buses.

The 20-mile tram network, which includes a significant extension opened in 2015, runs on electricity from renewable sources.

Traffic congestion has been tackled by introducing a workplace parking levy in 2012 – a controversial charge on employers that provide car parking for staff, but has raised £53m to fund public transport improvements – as well as upgrading cycle facilities.

A network of electric vehicle charging points have also been installed, with hopes of “greening” its taxi fleet and encouraging greater adoption of electric cars.

Meanwhile, solar panels have been fitted on 4,500 homes across the city, as well as on council buildings and prominent sites such as the intu Victoria Centre shopping mall, generating more than a million kilowatts hours (kWh) of energy in 2018.

A further 400 houses have been retrofitted with energy-efficient measures through Remourban – a major Future Cities renewable energy demonstrator project backed by the EU – and Nottingham energy supplier Enviro Energy has produced electricity from recycled waste.

Going forward, the council will build on these schemes and also has other ideas.

These include installing a 750 kilowatt (KW) battery at its Eastcroft depot this summer, which will enable the council to store power generated from solar panels that can either be traded with the National Grid or used to charge electric vehicles.

Storage batteries could also be rolled out to homes after feed-in-tariffs were scrapped, while the authority plans to increase sustainable management of waste and shorten supply chains by buying more goods and services locally.

The council said it wants to do more over the coming years in light of the UN’s Intergovernmental Panel on Climate Change (IPCC) global warming report last year.

It said “rapid and far-reaching” transitions in land, energy, industry, buildings, transport, and cities were needed to limit temperatures to 1.5C above pre-industrial levels – and avoid the worst effects of climate change.

Cllr Longford said some effects were already being highlighted, with 650 extra deaths in Britain last summer because of the heatwave.

“In Nottingham, we have 10,000 properties that are vulnerable to surface water flooding, which will increase as the effects of climate change worsen,” she said.

“We need a shift in the way we produce and use energy, more sustainable management of waste and ways to travel and to look at things like shortening supply chains by buying goods and services locally.

“We are looking at a range of schemes that involve innovative technology, such as installing large batteries that can store solar energy – initially at council premises but also exploring this for domestic properties too.

“There will also be things we will be asking local people to do, to help us to achieve our aim of becoming a carbon-neutral city by 2028 – we’re sure that like us they will rise to the challenge.”

She said: “It is essential for major cities such as Nottingham to declare a climate emergency, to put pressure on the government and other cities to recognise the dire situation we are facing.

“That’s because it will be sowing seeds for a higher profile for Nottingham’s leading reputation and enhancing its future as a progressive, healthy, successful and compassionate city – and because without rapid and significant reductions in the burning of fossil fuels, we will bequeath a dying planet to our children.”

Nottingham isn’t the first UK city to outline a vision to become carbon-neutral.

Bristol made a pledge in November last year to achieve this goal by 2030, with a focus on renewable electricity, carbon-neutral buildings, congestion charges and investment in clean transport infrastructure.

Manchester aims to achieve carbon neutrality by 2050, while Liverpool City Council went one further and stated last year it wanted the organisation to be “climate-positive” by 2020.

These proposals would be more radical than the UK government’s national target of an 80% reduction in emissions by 2050.

Globally, 72 cities have so far signed the C40 Cities climate action plan to deliver the objectives of the Paris Agreement – which aims to limit the global average temperature to “well below” 2C above pre-industrial levels, with an ideal of a 1.5C limit – by 2020.

Outside of major cities, the likes of Hoboken, in New Jersey, and Berkeley, California, have also set ambitious emissions reduction targets.