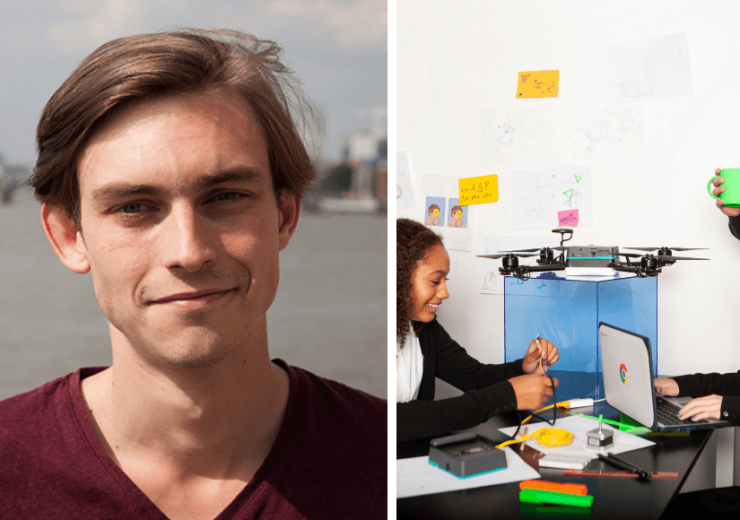 Jesse Lozano has had an unusual route into tech – starting off studying law, the young businessman was inspired to learn coding through his love of video games.

After participating in an accelerator scheme, the 31-year-old was inspired to launch his own affordable technology solution to improve STEM education.

The result was pi-top – a modular and portable computer that allows children to transform the box into a myriad of different devices such as a drone, heart rate sensor or robot.

Since launching the first iteration of the pi-top – a 3D-printed laptop – in 2014, the company received $16m (£12.2m) in investment in its latest funding round, and Mr Lozano has been awarded the EY entrepreneur of the year award and rising star award.

Where did your interest in technology begin?

I first started getting interested in tech when I was at university playing computer games.

I was looking at how I could make World of Warcraft run better on the computer and began making computers in my spare time.

When I was at university, I studied politics and then did a law degree, and really didn’t like either one of those.

I found politics interesting but as a profession, law was not for me.

I did a brief stint in journalism for City AM and then moved to being a freelance consultant, where I kind of fell into being a digital consultant.

Someone mistook me for somebody else and thought I could build websites.

I thought it sounded like a good idea and so had a go at building them myself.

From there, I got into making automated research algorithms and that led me to a programme called Entrepreneur First, a pre-idea business accelerator, where I met co-founder of pi-top Ryan Dunwoody.

We started talking and he mentioned Raspberry Pi a lot, I asked what it was and found that once you spend some time with it you can integrate it into a lot of things.

He was already working on projects using the small computer, but complained there wasn’t a product that lets you integrate a whole bunch of different sensors and allow you to build any project you want while still making it look good.

After our talks, everything seemed to align for the pi-top project.

What sparked your passion for coding and why do you think it’s important for the next generation?

Coding was a total hobby and that’s one of the cool things about it.

I think it’s one of the great social mobility tools of this generation.

My parents are salespeople. Ryan’s dad’s a builder and his mum is a saleswoman.

You can take technology and apply it to tasks, and make a career out of it.

No one in tech cares about what you look like, what you sound like or where you come from – all they care about are the skills you have.

Through that, you end up with a really diverse and interesting group of people, and I think that’s good for the industry.

What’s your vision for pi-top?

We are primarily a schools-focused company and we’re aiming to facilitate group learning across the world.

Where I see it going is essentially an extension of what we see here, facilitating learning by making in the classroom and augmenting teachers, not replacing them.

The world is taking a massive misstep by trying to make classrooms teacher-proof – I don’t think that’s what we should do.

The best teachers I remember really inspired me and we want to enable teachers to inspire their students.

How do you see pi-top being used in the classroom?

You can apply pi-top to anything. When you’re using it, you’re learning how to code, learning about electronics and components, learning about design and how they all work together.

You can put that into an IT class but equally you can put it in design technology, physics, chemistry or biology.

Pi-top 4 is a wearable so it will track the movement of your body and you can hook it up to sensors, which will measure your heart rate.

When you convert it into a drone, you can use it to map fields out, so it has uses for studying land management and geography-based skills.

It’s a very open platform that people can apply to any problem they want to solve.

Some of the coolest projects are things that I never would have imagined.

There are some kids in America that made solar-powered cars to race from Texas to California.

They were using pi-top to measure the telemetry of their solar cars to make better race decisions.

These people were 15 years old – it blows my mind and makes me excited to see what happens next.

How did it feel to win in EY’s entrepreneur of the year awards?

EY hosts an entrepreneur of the year awards and I won the rising star category. I was also the London overall winner.

As rising star, I was one of the youngest people there and got to meet people that were working on amazing projects – from gearboxes for F1 cars to silicon chips for massive companies. It was really fun.