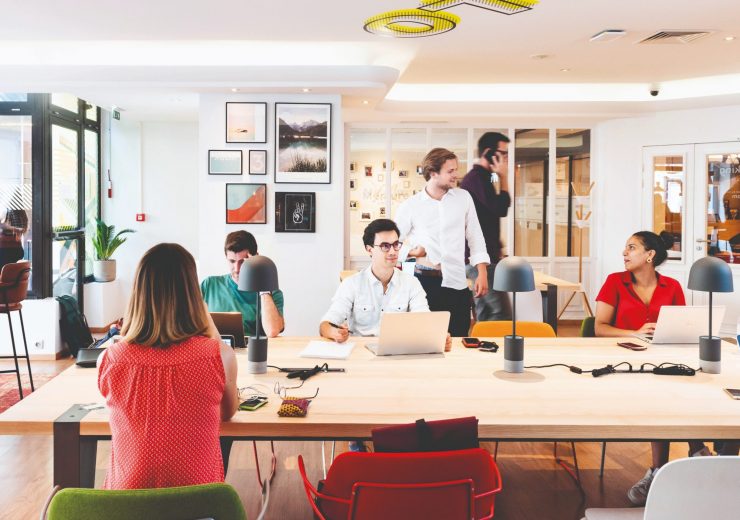 While the ‘end of the office’ proclamations feel overstated, Covid-19 has reshaped global working patterns like never before as digital meetings and home offices have become staple parts of our new reality. For an industry that has been tapping into co-working spaces for some time, hotels now look well placed to capitalise on local cohorts of cooped-up workers looking for a change of scenery. Will Moffitt speaks to Stéphane Bensimon, CEO of Wojo, and James Wheatcroft, vice-president of marketing at Accor Northern Europe, about how hotels are looking to a future of co-working and taking advantage of the trend.

Stéphane Bensimon doesn’t have an ‘official’ office. Instead, the CEO of Wojo can choose a venue that best suits his travel plans and hectic work schedule on any given week. He might start at the company’s office space in Lyon Grand Hôtel Dieu and work at one of the venue’s light and airy co-working spots. At lunch, perhaps, he might visit the Parc de la Tête d’or and admire its large botanical garden before heading back to grab a
coffee at the hotel bar.

If a business meeting draws him to Paris, he could meet a client at a Wojo office in Champs-Élysées and finish the day watching the sunset fall on the Arc de Triomphe.

The phrase ‘practicing what you preach’ springs to mind. After all, flexible working is an area that Bensimon has spent a great deal of time thinking about. In June 2019 he was appointed CEO at Wojo, formerly known as Nextdoor, a joint venture between Accor and Bouygues Immobilier created in July 2017 to capitalise on the co-working trend.

That didn’t mean simply offering hotel guests a coffee and a reliable Wi-Fi connection. Instead, Wojo began utilising Accor hotels to establish a network of ‘office spaces’ across France, where guests could drop in and work at these facilities on an ad hoc basis.

The company has become a fast-growing force in the co-working space since it opened its first property inside the Mercure Paris Montmatre Sacre-Coeur. Now, 300 Wojo Spots operate across 70 French cities and Bensimon and co have expansive ambitions. In the summer of 2019, Accor announced plans to make Wojo the leading co-working brand in Europe by 2022.

For Bensimon, the brand’s mantra was simple. Combine the functionality of a working office with the service and joie de vivre of a well-run hotel. “Coming from Accor I saw that,” Bensimon says, speaking about the way the hotel industry was trying to tap into nomadic working tendencies.

“I thought: why can a hotel not be a real working place for companies? We knew that the lobbies were already used by some workers but it’s not so natural to sit in a hotel and work for one or two hours. It’s much easier to do that in a Starbucks or a Pret a Manger.”

Work from home could become ‘work from anywhere’

It’s a trend that has been revolutionised by the pandemic as traditional nine-to-five office workers have been forced to adapt to months of perpetual lockdown at home.

As Bensimon reminds me, remote and flexible working were gathering momentum long before a mysterious virus emerged in Wuhan. Since 2012, the number of co-working spaces has grown from 2,150 to 26,000. “Co-working has grown very quickly since the 2008 financial crisis. We know that the penetration rate of the flexible workspace is around 2% in Europe, more or less,” he says.

In prominent global cities like London, Amsterdam, Shanghai, Beijing or New York, that figure hit 10% before the pandemic. Then Covid-19 came along.

With lockdown loosening the ties office-goers previously had to their place of work, and workers benefitting from time spent not commuting, the perception of working life has changed – perhaps irrevocably.

For some, that means a more flexible attitude to work once offices reopen. For others, it means rethinking – and perhaps replacing – the fixed office space model with something more flexible. After all, in a time of economic downturn, many companies need to save money on retail costs.

“Even before the pandemic, offices were being used between 50% and 70% of the time. So now the heads of companies are wondering how they can reorganise their way of working and integrate home working into their companies,” Bensimon says.

“It’s a combination of different trends and different stakes: flexibility, cost savings and companies are [now] looking for much more efficiency.”

For Accor, the short-term plan is to capitalise on cohorts of cooped-up workers looking for more fulfilling places to spend their days. It’s a strategy built on solid research. A company study conducted last summer on home-workers showed that 41% feel their work-life balance “has worsened since working from home due to coronavirus” and 22% stated their productivity is down due to WFH distractions.

“Working from home was noticeably taking its toll on mental health and productivity,” says James Wheatcroft, vice-president of marketing at Accor Northern Europe. “[So] we started to explore the notion of working from anywhere and launched our Hotel Office.”

The service enables anyone to book a regular space or one-off room in an Accor hotel, providing a solution that offers socially-isolated work spaces with the added perks of room service and a cheeky bar below the office. More a stop-gap solution than a long-term plan, it’s a trend that other hoteliers are also tapping into.

In February, Hyatt also launched its Great Relocate offering, calling on guests to “swap their spare room for working poolside” in locations such as Cape Town or Dubai, Taghazout or Venice “without the usual crowds”.

Employers may favour a ‘hybrid’ co-working model in the future

“Moving forward, we see the solution being a hybrid model with employers rethinking commercial real estate and office spaces to enable employees to work from home two or three days a week and work from anywhere the rest of the time,” explains Wheatcroft.

Working from anywhere in this instance includes home working, hotel working and hotel-office working. At Wojo, guests have three workspaces to choose from.

Design is a clear selling point for the Wojo brand, perhaps best exemplified by its flagship property in Montmartre with its minimalist aesthetic: white walls, pine desks, filament bulbs and geometric prints. Its Lyonnaise property, Grand Hôtel-Dieu, won best retail urban project at the Mapic Awards in 2018 for its impressive reconversion by Bouygues Immobilier.

Speak to Bensimon and the desire to make Wojo buildings both functional and memorable is clear. “Design is very important,” he says. “You have to give a story to your space and that’s the reason that each Wojo site has its own designer and its own story.”

A story also needs some atmosphere and Bensimon places a high premium on sociability and service in Wojo spaces. Given that many home workers are coming to these venues to be social, and office workers still want the buzz of the traditional workplace, striking the balance between work and play is key.

“I tried to conserve the hospitality code inside Wojo office buildings and now it’s time to put some of the office back into hospitality,” Bensimon says. “My aim is to create an emotional path in every building. That begins with a hello in the morning and a goodbye in the evening… There is a real lifestyle around you to take more pleasure in going to work.”

Of course, it remains to be seen how many people buy into the co-working hotel concept once offices reopen. For all the assumptions that society will be recalibrated post-pandemic, some office workers will be rushing back to their old routines. The thought of venturing somewhere entirely new might be less enticing than a return back to old haunts.

Wheatcroft remains confident in the co-working space. After all, he says, “Accor had huge ambitions for Wojo long before the pandemic”.

“As businesses come out of the pandemic, many companies will not need permanent office space and will look for alternatives to reduce rental costs. Working from anywhere will likely stay in high demand,” he says.

“What’s more, from a personnel perspective, the pandemic has forced businesses and teams to react and adapt and people have proven that even in the most challenging circumstances they can WFA and deliver. This will change the future of work, so Wojo and Hotel Office will be here to stay.”

Bensimon is continuing to encourage companies to experiment with the Wojo model. Right now, predicting when the pandemic might end and when office life might restart is currently his “biggest challenge”. Recently, he adds, a company director was so impressed by the Wojo experience that he signed a long-term contract.

“They will not be coming back to a traditional lease in a traditional building,” Bensimon says. “They [want to] stay in hotels, because that is where there is life.”