Which companies are sponsors for UEFA Euro 2020? Profiling the six main partners

As the European nations aim to qualify for the UEFA Euro 2020 football tournament, Sam Forsdick takes a look at the competition's sponsors 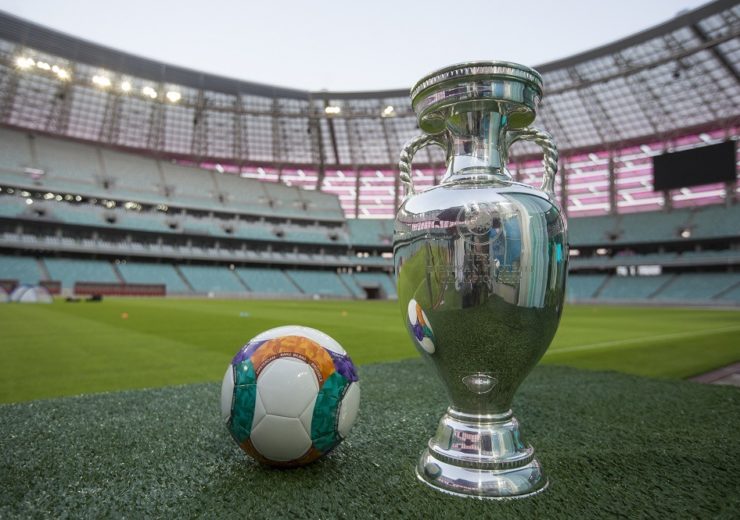 UEFA Euro 2020 football and cup at the Baku Olympic Stadium, one of the 12 host stadiums (Credit: UEFA)

The UEFA Euro 2020 competition pits 24 European football teams against one another to find the best international side on the continent – and while qualifiers for the event are still taking place, the sponsors have already been finalised.

The official sponsor list includes six companies from the US, China, Germany and Azerbaijan that are all looking to reach more customers across Europe.

The 2020 European Championships will mark the 60th anniversary of the football tournament, which takes place once every four years.

Euro 2016 was watched by two billion people on TV, while 600 million tuned in to watch the final – which saw Portugal narrowly beat France 1-0.

These are the names that will be seen on the advertising boards around the stadiums at Euro 2020.

Chinese payment platform Alipay secured an eight-year global partnership deal with UEFA for a fee believed to be worth more than €200m (£176m).

Alipay, which is operated by Ant Financial and is an affiliate company of the Chinese conglomerate Alibaba, will serve as the Euro 2020 official global payment partner.

It is the largest mobile payments provider in China, serving a third of the country’s population.

Alipay’s primary product is a digital wallet, which allows customers to make payments directly from their mobile devices by scanning QR codes.

State-owned Chinese electronics company Hisense will join Alipay as a sponsor for Euro 2020.

The technology firm, which was founded in 1969 as a radio manufacturer, previously sponsored the 2018 FIFA World Cup and now produces TVs under the Sharp and Toshiba brand names.

Part of the interest in Euro 2020 among Chinese sponsors is due to the popularity of the 2016 event among viewers in Asia.

According to Broadband TV News, 56 million Chinese viewers tuned in for the Euro 2016 final – more than any other individual European nation.

German automobile manufacturer Volkswagen confirmed its position as the official mobility partner for Euro 2020 back in August 2017.

The carmaker claims it will use the event to promote its new ID electric vehicle range – which will eventually include an autonomous car model.

US delivery company FedEx signed a four-year multi-tournament sponsorship deal with UEFA in April 2019 and will be the official logistics partner for Euro 2020.

With this year’s event being held across 12 cities in 12 different countries, UEFA marketing director Guy-Laurent Epstein claims that FedEx’s knowledge and expertise will prove to be invaluable in running the tournament.

Travel and hotel listings website Booking.com signed a four-year sponsorship deal with UEFA for all national team football competitions until 2022.

It was named as the official accommodation partner for Euro 2020 in October 2017.

The State Oil Company of Azerbaijan Republic (SOCAR) is the official energy partner for Euro 2020.

The state-owned oil and gas company has onshore and offshore fields in the Caspian Sea and across Azerbaijan.

It first formed following a merger of nationalised oil companies after Azerbaijan gained independence from the Soviet Union and its fuel networks serve customers in Turkey, Georgia, Romania, Switzerland and Ukraine.