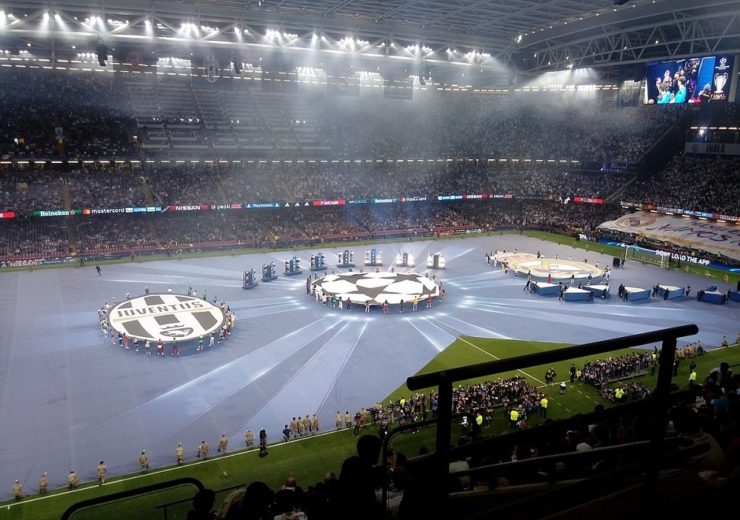 Every season, billions of people tune in to watch the best football teams in Europe battle it out in the UEFA Champions League – making it an ideal platform for big-name sponsors.

The club tournament features the best teams on the continent – from Real Madrid to Manchester City – and is broadcast in over 200 countries, with the final attracting hundreds of millions of viewers.

Since the football competition’s inception in 1992, it was agreed there would only ever be a maximum of eight companies allowed to sponsor the event.

Rights and benefits were also drawn up as part of the arrangement, including equal pitchside advertising space, logo placement in post-match interviews, priority on TV adverts and a certain number of corporate tickets to each match.

Here, we profile each of the 2018/19 season’s Champions League sponsors.

Russian energy company Gazprom is one of the largest producers of natural gas in the world and owns the world’s largest gas transmission system with a total length of 172,100 km.

The company has a strong association with football, sponsoring Zenit St Petersburg, Schalke and Red Star Belgrade alongside the Champions League.

Alexey Miller, CEO of Gazprom, has previously said: “Gazprom is not only the largest gas company in the world, but also one of those most passionate about football.”

The current Champions League sponsorship deal with Gazprom was recently extended until 2021.

Dutch brewery Heineken has a long history with the Champions League, having first sponsored the competition in 2005.

Heineken’s partnership with UEFA stretches back even further to 1994 and was recently renewed until 2021.

Hans Erik Tuijt, global sponsorship director at Heinken, said: “Heineken has enjoyed a long and successful partnership with UEFA for more than 20 years, and we look forward to continuing this.

“UEFA Champions League in an integral part of Heineken’s marketing activities, from Sao Paulo to Shanghai.

“Through this, as well as our acclaimed UEFA Champions League Trophy Tour, we create engaging fan experiences that go beyond the 90 minutes of the match.”

US food and drink company PepsiCo was another to renew its partnership with the Champions League this season.

Its brands include Pepsi, Walkers, Doritos and Gatorade.

As part of the sponsorship arrangement, Pepsi hosted a live music performance at the opening ceremony of this season’s Champions League, and Walkers built an artificial football pitch at the Za’atari refugee camp in northern Jordan.

Mastercard has been associated with the Champions league for over 20 years.

Javier Pérez, president of Mastercard Europe, said: “Key sporting events are a great way for us to directly connect fans across the world to their passion.

“We will also continue to create innovative business-building opportunities for our partners.

“As we enjoy our 24th year as an official sponsor, we are excited to witness new priceless moments.”

As part of its sponsorship deal with the football completion, Mastercard has offered fans the chance to be a match-day mascot and walk alongside the players on to the pitch.

As part of the deal, Nissan has toured the Champions League trophy across Europe and promotes a goal of the week competition for fans to vote for online.

Roel de Vries, corporate vice-president at Nissan, said the partnership was “at the very heart of our global marketing strategy”.

He added: “We’ve seen huge success from the partnership and the additional engagement it has allowed us to have with consumers.”

Spanish bank Santander was a new sponsor for this season’s competition.

Banco Santander executive chairman Ana Botín said: “Santander’s partnership with the UEFA Champions League, the world’s most global and aspirational sporting competition, builds on our support of Libertadores and, more recently, Racing Santander, the local football team of the Cantabrian city where our bank was founded 160 years ago.”

Former Real Madrid and Brazil striker Ronaldo was also announced as an ambassador for the brand.

To reinforce the bank’s connection to the sport, it will launch the Football Can campaign to support grassroots football.

Holiday booking service Expedia became the official travel partner of the Champions League at the start of the 2018/19 season.

Commenting on the partnership, Expedia Group CEO Mark Okerstrom said: “As the world’s travel platform, Expedia Group is excited to be reaching an agreement with the UEFA Champions League.

“There is no better sport than football to bring fans together around the world to follow their dreams of UEFA Champions League glory, and no better way to make that happen than through the power of travel.”

Sony Entertainment, subsidiary of technology company Sony and owner of the PlayStation brand, has had a long-standing relationship with the competition that stretches back to 1997.

Most recently, the Champions League sponsorship deal with Sony Entertainment was extended to 2021.

As part of the deal, the company will provide VR content for Champions League fans and will host a PlayStation FC match the day after the final.

Commenting on the agreement, UEFA events marketing director Guy-Laurent Epstein said: “PlayStation has been a valued partner of the UEFA Champions League for more than 20 years, so I am delighted that as we conclude another thrilling season together, we are able to celebrate a three-year extension to our relationship.”