There are plenty of celebrities investing in the cryptocurrency market following waves of interest in digital currencies like bitcoin, once it became clear that an investment at the right time could end up in a swift and sizeable return 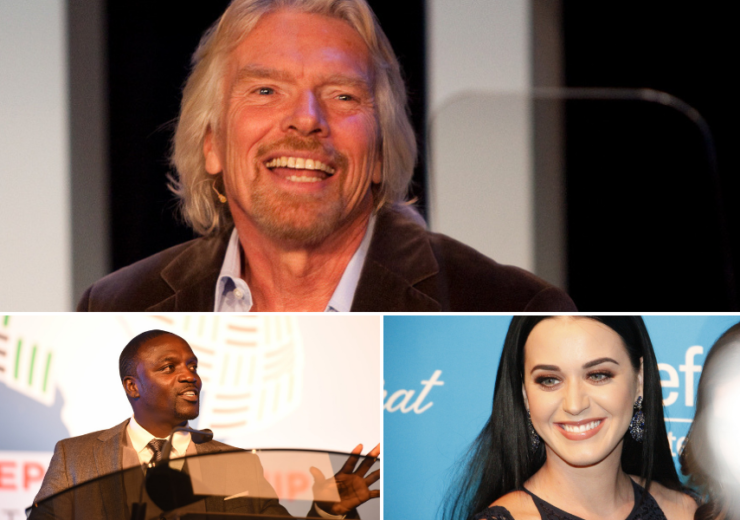 Sir Richard Branson, Katy Perry and Akon are among the celebrities investing in the cryptocurrency market

As the value of Bitcoin has swung high and low over the past few years, more and more people have invested in digital currencies for a quick buck – a phenomenon that has also led to a red carpet of celebrities investing in the cryptocurrency market.

A number of household names – ranging from actors and singers to businessmen and boxers – have lent their weight to cryptocurrencies and related blockchain projects.

A couple of the most bullish celebrities have even gone so far as to create their own digital coins.

Compelo has taken a look at how seven celebrities investing in the cryptocurrency market have lent their support to emerging technologies.

BitPay investor Ashton Kutcher dropped by our office this week to talk to our team & share insights on taking #bitcoin payments mainstream. pic.twitter.com/2Lgsmoufhe

An actor and tech investor who once played the role of Steve Jobs, Ashton Kutcher has long been a big supporter of cryptocurrencies.

Kutcher was an early investor in the blockchain payments platform BitPay, which later attracted $30m (£23m) from a host of A-list celebrity investors.

He also donated $4m (£3.1m) worth of the Ripple XRP cryptocurrency to the Ellen DeGeneres Wildlife Fund charity run by the famous American chat show host.

The American-Senegalese artist and investor will be putting the digital currency at the heart of a futuristic crypto-powered city in Senegal that is reportedly located on land gifted to Akon.

The Akoin website claims the “Akoin Ecosystem” will create opportunity for young African entrepreneurs by allowing consumers to buy, sell and spend cryptocurrency through “a suite of blockchain powered apps” that offer “revenue-generating opportunities”.

At a panel discussion covered by entertainment website Page Six, Akon said: “I think that blockchain and crypto could be the saviour for Africa in many ways because it brings the power back to the people and brings the security back into the currency system.

“It also allows the people to utilise it in ways where they can advance themselves and not allow government to do those things that are keeping them down.”

Virgin Group founder and British business bigwig Richard Branson was one of the investors in BitPay during its $30m (£23m) funding round in 2014.

He has also invested in the cryptocurrency wallet Blockchain.

Listed on the Virgin Group website, BitPay is described as the “largest bitcoin payment processor in the world”.

In a blog post about his blockchain investments, Branson said: “I have always loved thinking about what’s new, and what is coming next to improve all of our lives.

“It is that curiosity that has driven my interest in emerging payment technologies, and my investment in the company Blockchain.”

An American rapper responsible for one of the greatest albums of all time, Nas has become something of a crypto aficionado since the peak of his music career.

Speaking to Coindesk about cryptocurrency, Nas said: “[Bitcoin] will evolve into an industry as big, if not bigger, than the Internet.

“This isn’t of the Internet age, Bitcoin is its own age.”

In 2015, the rapper was a part of the $3m (£2.3m) funding round of BlockCypher – a blockchain applications and technology firm.

He has also snapped up a bit of bitcoin in the past, telling Coindesk four years ago that he was holding on to his coins for the time.

Mike Tyson is not one to be phased by swinging cryptocurrency markets – first sinking his teeth into the digital currency market in 2015.

The legendary boxer unveiled an ATM for bitcoin in Las Vegas branded with a fight-ready Mike Tyson on the front.

A year later, the former fighter really laid into the market by launching his own bitcoin wallet with the same firm behind the Mike Tyson Bitcoin ATM.

Wu-Tang Clan member Ghostface Killah was instrumental in the creation of the rap group’s hit track C.R.E.A.M. (Cash rules everything around me) – and has since created a digital currency named after it.

The rapper launched the CREAM coin (crypto rules everything around me) ICO in 2017 in the hope of raising $30m (£23m).

In the CREAM whitepaper, the currency’s creators wrote: “CREAM crowd sale and CREAM coin project as a whole will focus on helping, promoting and funding crypto start-ups.”

CREAM coin is trading at a fraction of one cent at the time of writing.

Katy Perry flashed her Swish Swish “crypto claws” in an Instagram post back in January of this year – around the time popular interest in cryptocurrency was climbing.

Her dollar bill design nails were adorned with the logos of major digital currency symbols – including Bitcoin, Ethereum and Litecoin.

Something of a digital currency Dark Horse, she has also posted an Instagram picture of herself with superstar investor Warren Buffett, claiming she had asked for his thoughts on cryptocurrency.