Having amassed a galactic fortune with online fashion retailer ZOZO, Japan's Yusaku Maezawa will become the first commercial passenger to go into space after securing his place on Elon Musk-owned SpaceX's maiden voyage to the moon 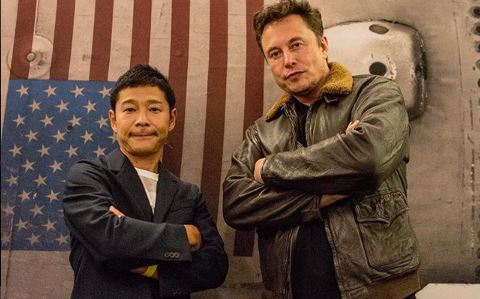 Japanese billionaire Yusaku Maezawa could be the moon’s first ever tourist after announcing he will be a passenger on SpaceX’s first ever mission there. He’s amassed the wealth necessary to be the coveted ticket holder largely off the back of his online clothing brand – but what is ZOZO?

An entrepreneur and art collector, Mr Maezawa was estimated by Forbes to be worth $3.6bn (£2.7bn) in 2017, and is believed to be the 14th richest person in Japan.

His voyage into the stars and onto the moon, facilitated by Elon Musk’s rocket company SpaceX, will reportedly launch in 2023, or even earlier depending on how the development and testing of the rocket goes.

Musk said the Big Falcon Rocket, the 387ft fully reusable launch vehicle and spacecraft system to be used for the six-day journey, is still in development and will make several unmanned test launches prior to taking on passengers.

Mr Maezawa plans to take several artists along with him on the trip, but has not yet sent out his invitation list – so keep your fingers crossed.

Here we look at how the 42-year-old earned his galactic fortune by creating the largest online fashion retailer in his native country.

What is ZOZO? How it all began

Mr Maezawa grew up in Japan’s capital Tokyo and, after a failed attempt to launch a pop band, started a company that sold albums through the post.

While not an astronomical success, the company grew large enough that it allowed the 42-year-old to launch his retail business, Start Today, which went fully online in 2000.

Start Today became a publicly-traded company on the Tokyo Stock Exchange in 2010.

What is ZOZO? How Start Today spawned a global brand

In January, Mr Maezawa introduced ZOZO, a custom-fit clothing brand, in more than 72 countries across the world.

The new brand offers basic apparel items, which provides made-to-order-clothing to fit every shape and size of Start Today’s customers.

It was launched in tandem with the ZOZOSUIT, a free domestic measurement system with in-built stretchable sensors, which customers can wear to determine their specific measurements to be provided to the company in order to ensure a perfect fit.

The soon-to-be space-faring Mr Maezawa founded the Tokyo-based Contemporary Art Foundation in 2012, intending to “support young artists as a pillar of the next generation of contemporary art”.

In 2016, he made headlines after making a record-breaking purchase of $57.3m (£44m) for an untitled work by American artist (of Haitian and Puerto Rican descent) Jean-Michel Basquiat.

The 42-year-old broke his own record the following year with a successful $110.5m (£84m) bid for a piece by the same artist.

Mr Maezawa has plans to open a contemporary art museum in Chiba, Japan, which will house his collection.