The Inspiration4 crew during their multi-day journey in orbit had carried out scientific research, which was designed for advancing human health on Earth and during long-duration spaceflights planned for the future 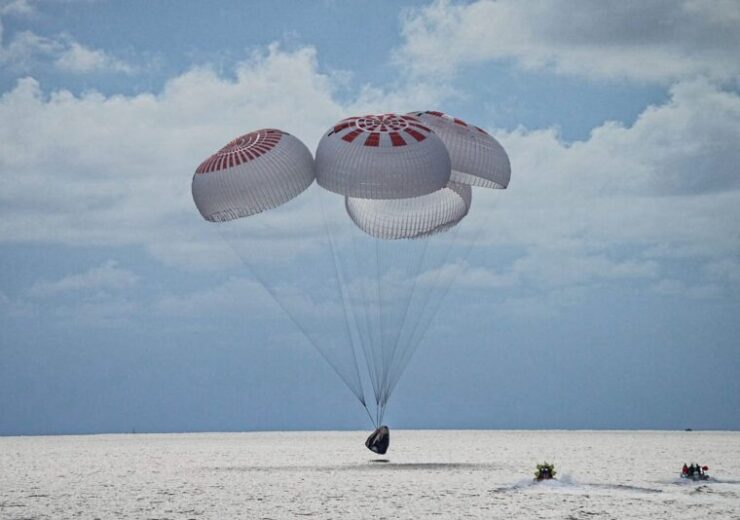 The Dragon spacecraft splashed down in the Atlantic Ocean to mark the completion of the Inspiration4 mission. (Credit: Inspiration4)

SpaceX has completed its Inspiration4 all-civilian mission of orbiting Earth for three days after the Dragon spacecraft splashed down safely in the Atlantic Ocean off the coast of Florida.

Inspiration4 had left Earth from the Launch Complex 39A of NASA’s Kennedy Space Center in Florida on 15 September. The Dragon spacecraft, which carried four amateur astronauts, landed off the coast of the space centre.

The spacecraft, in turn, was launched on SpaceX’s Falcon 9 rocket.

The Inspiration4 space mission in the process raised more than $210m so far for the St. Jude Children’s Research Hospital.

According to SpaceX, teams on its Go Searcher recovery ship had been engaged in securing the Dragon spacecraft.

Subsequently, Dragon was hoisted onto the main deck of the recovery ship, where the four-member crew of the Inspiration4 had exited the spacecraft. They had undergone medical checks and were flown back to the Kennedy Space Center in a helicopter.

SpaceX said that it had transported the Dragon spacecraft back to Cape Canaveral, where it will undergo inspections and refurbishment prior to other human orbital missions in the future.

The mission of Inspiration4 was for studying the human body in space. Its crew was led by Jared Isaacman, the founder and CEO of Shift4 Payments.

The Inspiration4 crew during their multi-day journey in orbit had undertaken scientific research, designed for advancing human health on Earth and during long-duration spaceflights planned for the future.

During the all-civilian space mission, the Dragon spacecraft made it to its intended target orbit.

The altitudes travelled by the SpaceX spacecraft were up to 590km above the Earth’s surface.

The space transportation company said that Dragon had flown farther than any human spaceflight since the Hubble missions.