As the countries behind brand titans like Samsung and VW, South Korea v Germany is as fascinating a story in their respective economies as it is in their on-pitch battle at the 2018 World Cup battle - a game in which the stakes are high 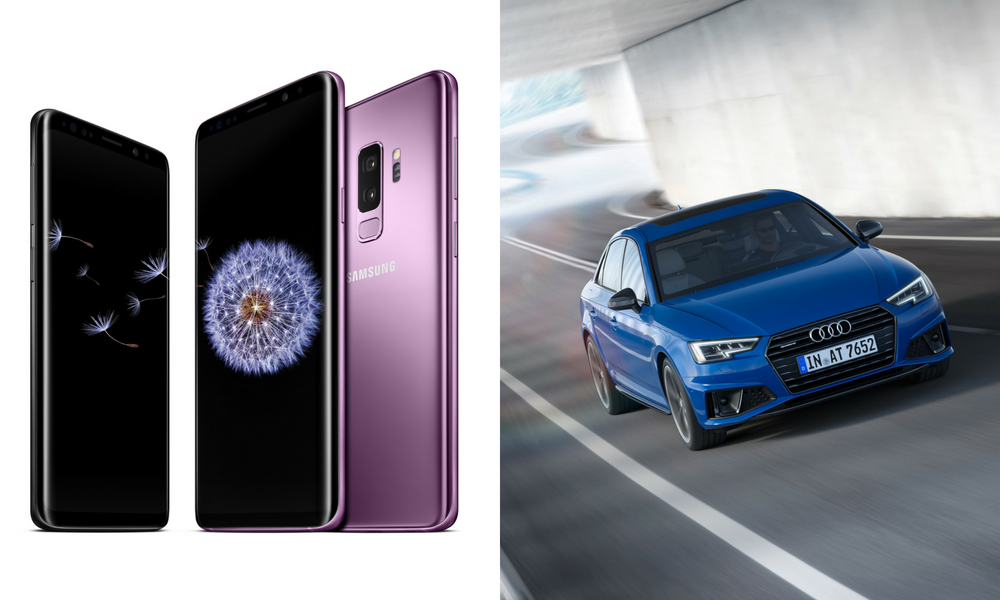 A Samsung Galaxy S9 and Audi A4 Sedan

South Korea v Germany could go down as the David and Goliath moment of the 2018 Russia World Cup.

When the two sides meet at the 45,000-capacity Kazan Arena, Germany will be gunning for the convincing victory they need if they are going to get through to the knockout stages in reasonable comfort.

Going into the match, the World Cup title-holders are sat in a precarious second place on the same points and goal difference as Sweden.

This means a draw or narrow victory could see the Germans dumped out of the tournament should Sweden clinch a one-goal win over group leaders Mexico.

South Korea are sinking at the bottom of the group, having failed to get a point so far – and are relying on very complicated arithmetic – and a win – if they are to qualify for the round of 16.

They are also the underdogs going into the match with the European side this afternoon.

The Google probability counter has the chance of South Korea winning at a lowly 6% and the reigning champion’s likelihood of victory at 81%.

Compelo checked if Germany compared with South Korea in a similar way on the economy.

Germany has 30 million more people on hand than South Korea, according to the 2017 UN World Population Prospects report.

Yet roughly three times as many people reside in the South Korean capital Seoul – 9.6 million – than they do in German capital Berlin, with 3.47 million.

The gap between the two countries’ economies is larger in scale than the difference between their populations.

German workers also produced more per-head than their Korean peers, churning out an estimated $50,200 each in 2017 compared to the $39,400 made by South Koreans.

Germany – home of the Volkswagen, BMW and Daimler – has an export value driven by the sale of vehicles.

Cars made up 12% of the country’s $1.25tn worth of exports in 2016, according to the Observatory of Economic Complexity.

This meant they drove a roaring $154bn into the European superpower’s economy.

The biggest export of South Korea was integrated circuits, accounting for 15% of the country’s smaller export balance of $516bn.

Being an engine economy of the European Union, it is not surprising that a host of German firms can be found on the Forbes Global 2000 list of the world’s largest public companies.

The Volkswagen Group – which includes brands like VW, Audi, Bentley and Porsche – is ranked 16th on the list with a $101.4bn market value, tailgated by its compatriots Allianz Insurance (#22) and fellow vehicle manufacturer Daimler (#29).

But there is no German company on the list ranked higher than the South Korean electronics giant Samsung – which enters the list as the 14th biggest firm valued at $325.9bn.

The chairman of Samsung Lee Kun-Hee is the richest man in the Republic of Korea, according to the Forbes billionaires list – which has him ranked as the 61st richest man on the planet with a worth of $18.6bn.

Kun-Hee is still not nearly as rich as his German counterparts. Beate Heister and Karl Albrecht Jr – the children of Aldi co-founder Karl Albrecht – possess a combined inherited wealth of $29.8bn.

This makes the siblings the 27th richest people on Earth – with a slightly unfair advantage over their Korean contemporary.

Levels of unemployment in both countries have brought the 2018 World Cup rival to a draw, according to CIA World Factbook figures.

Unemployment in both Germany and South Korea was estimated to sit at 3.7% in 2017 by the intelligence agency’s reckoning.